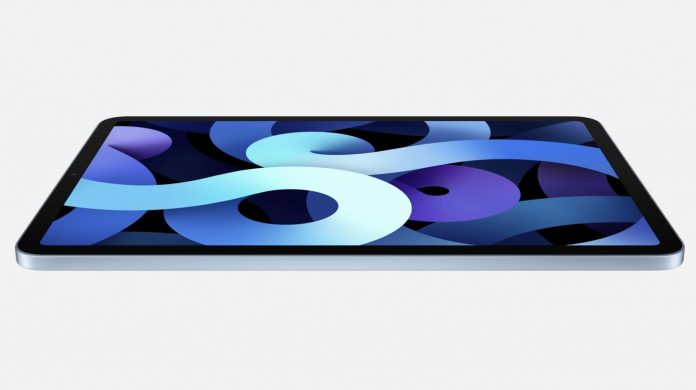 Apple today introduced a redesigned iPad Air with slimmer bezels, paving the way for an all-screen design similar to recent iPad Pro models. In addition, the new iPad Air is the first Apple device with Touch ID built into the power button.

The new iPad Air is powered by the new 5nm-based, six-core A14 Bionic chip for up to 40 percent faster performance and up to 30 percent faster graphics than the previous-generation iPad Air. This is the same chip that is expected to be used for iPhone 12 and iPhone 12 Pro models, which will reportedly be introduced next month.

Following in the footsteps of the iPad Pro, the new iPad Air features a USB-C port instead of a Lightning connector. The device also features the same 12-megapixel rear camera used in the iPad Pro for higher-resolution photos and 4K video recording.

The new iPad Air will be available starting in October on Apple.com and the Apple Store app in 30 countries and regions. Wi-Fi models will start at $599, while cellular models will start at $729, with 64GB and 256GB storage capacities available. There will be five colors to choose from, including silver, space gray, rose gold, green, and sky blue.Related Roundup: iPad Air Tag: September 2020 eventBuyer’s Guide: iPad Air (Don’t Buy)
This article, “Apple Introduces Redesigned 10.9-Inch iPad Air With A14 Chip, All-Screen Design, Touch ID in Power Button, and USB-C” first appeared on MacRumors.com