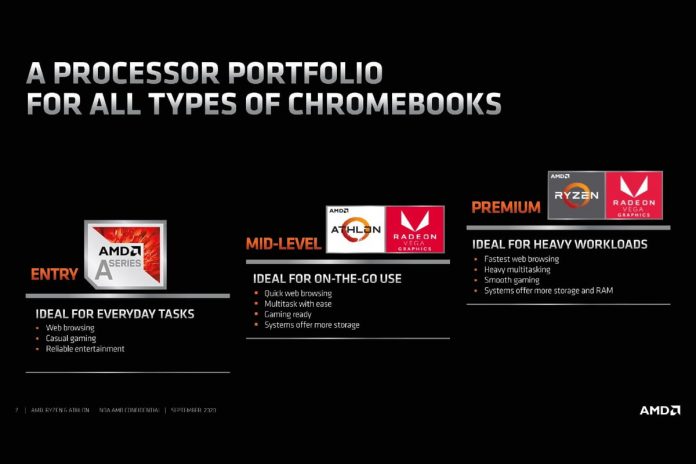 AMD has announced a new series of mobile processors that are geared specifically toward upcoming midrange and high-end Chromebooks. In the past year, AMD says its market share of Chromebooks has grown from 5.2% to 21%. So far, that’s consisted exclusively of ultra-cheap Chromebooks powered by AMD’s A-series processors.

Now, AMD has launched a new line of Athlon and Ryzen processors for Chromebooks, known as the Ryzen 3000 C-series. The Ryzen chips are identical to the Ryzen 3000 chips launched for Windows devices in 2019 — AMD says the C-series branding is to help clarify the names for users and potential buyers.

As Chromebooks have continued to get more expensive and more powerful, some manufacturers have begun to opt for Intel Core processors rather than the slower Celeron or Pentium variety. That’s exactly what these new AMD processors are looking to compete against.

These aren’t the latest Ryzen 4000 processors that introduced eight-core configurations with improved Radeon graphics. Still, they introduce the powerful Zen+ core (Ryzen) and Zen core (Athlon) to the world of Chromebooks, which is a first.

Here’s the full rundown of the new Ryzen and Athlon processors.

The Ryzen 7 3700C lines up exactly with the Ryzen 7 3700U, while the Ryzen 5 3500C matches the Ryzen 5 3500U. These both use the 12nm process Zen+ architecture and feature four cores and eight threads. They should be plenty powerful for these types of laptops, and should easily outperform the 8th-gen Intel Y-series chips found in premium Chromebooks like the Asus Chromebook Flip C434. Meanwhile, performance will be in line with with the Core i5-10210U, found only in top-tier Chromebooks like the Samsung Galaxy Chromebook.

The Ryzen 3 3250C is the outlier. Despite having just two cores, far less graphics cores, and the older Zen architecture, it’s given the “Ryzen” brand nonetheless. This could be to fight against the proliferation of Intel Core m3 processors as the base configuration for Chromebooks like the Pixelbook Go.

The Athlon Gold and Athlon Silver are both dual-core processors — one with simultaneous multithreading and one without. These fall into the midrange area, but would be a big step up in performance compared to the A-series chips. AMD does, however, say it will continue to support budget-level systems with its A4 and A6 chips.

AMD didn’t offer direct comparisons to Intel or MediaTek Chromebooks. Instead, the company offered performance numbers for its chips in benchmarks such as PCMark and 3DMark. The graph shows that the Ryzen 7 is 151% faster than the A6 in 3DMark Slingshot, which is an Android-based graphics benchmark. Meanwhile, the Ryzen 7 is 153% faster in the Android-based PCMark Photo Editing.

For native performance, AMD states that the Ryzen 7 is also 153% faster in the web-based Speedometer 2.0 benchmark, which measures speed in running browser-based JavaScript applications.

AMD says there are total of six different Ryzen and Athlon Chromebook designs coming in 2020, though how many of each remains to be seen. We expect to see announcements from companies like HP, Dell, and Lenovo soon. AMD even mentioned that some designs would be oriented toward the commercial market.