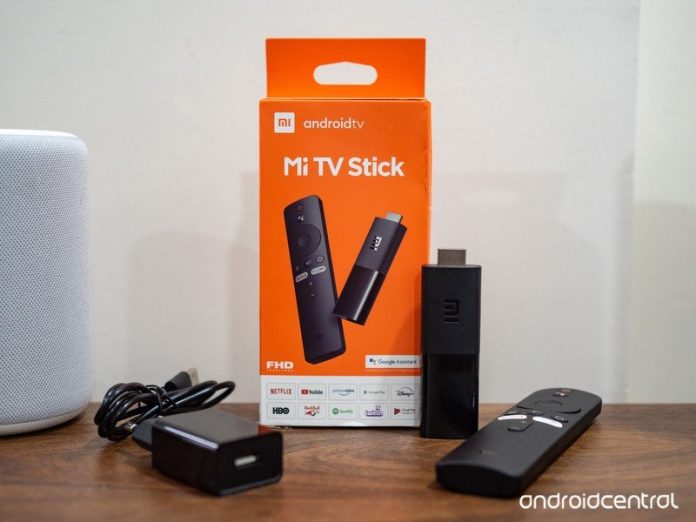 With full-fledged Android TV and a great remote, Xiaomi’s Mi TV Stick is one of the best budget streaming dongles around. 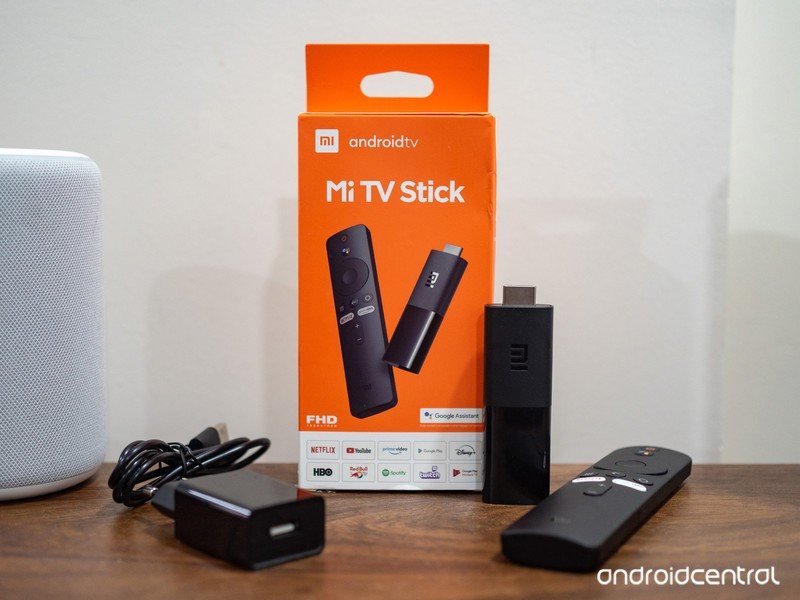 There are plenty of great Android TV boxes in the market right now, and Xiaomi itself has a decent product in this category in the $60 Mi Box S. The 4K-enabled Mi Box S launched nearly two years ago, but it continues to be a decent alternative to the Chromecast Ultra and the Fire TV Stick 4K.

Xiaomi is now setting its sights on the regular 1080p version of the Fire TV Stick. That particular model is available for $40, which is what the Mi TV Stick will retail for once it debuts in the U.S. The Mi TV Stick has the same fundamentals; you get a great remote, access to your favorite streaming services, full-fledged Android TV interface, and reliable 1080p streaming performance.

We don’t have details on when the Mi TV Stick will be available in the U.S., but with the Mi Box S officially available in the country, Xiaomi should release the product in the coming weeks. The Mi TV Stick is slated to launch in Europe for €39.99 ($45) and is set to be announced in India on August 5, so here’s what you need to know about Xiaomi’s latest Android TV streaming solution, and whether it makes sense to pick up the Mi TV Stick over Amazon’s Fire TV Stick. 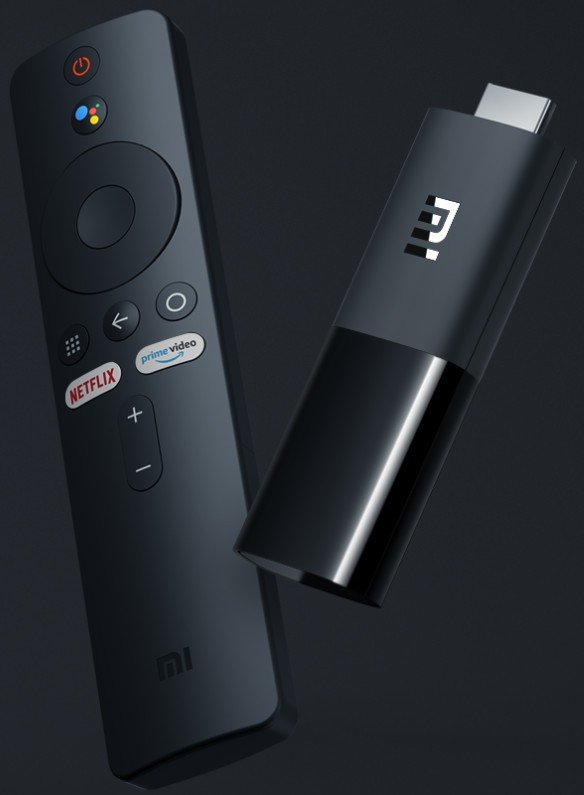 Bottom line: The Mi TV Stick lowers the barrier to entry for Android TV. It delivers reliable performance in day-to-day use and gives you access to all of your favorite streaming services. The remote lets you easily invoke Google Assistant, and there’s Chromecast built-in for casting content from your phone. In short, the Mi TV Stick is the best Android TV streaming dongle you’ll find for under $50. 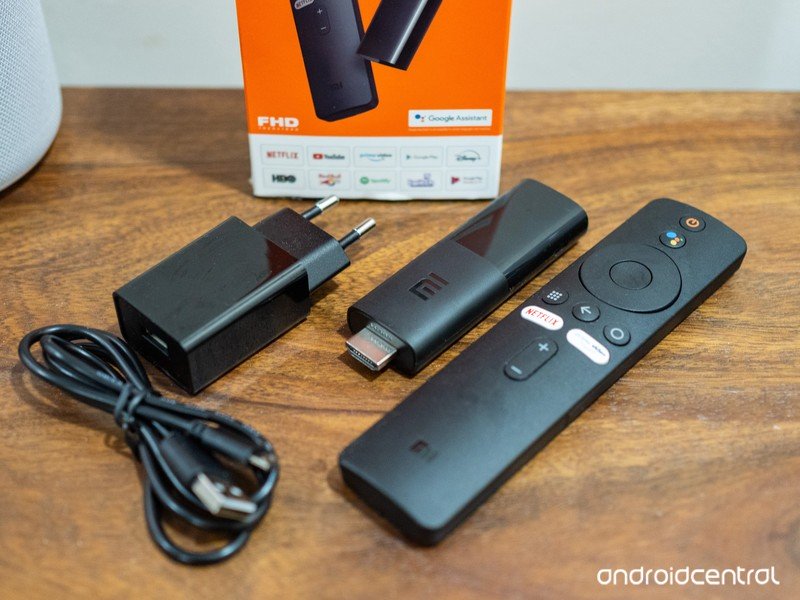 With dimensions of 92.4 x 30.2 x 15.2mm, the Mi TV Stick is a more compact version of the Fire TV Stick. There’s a big Mi label on one side, and the lower portion of the dongle has a glossy finish. You get a HDMI connector at the front, Micro-USB port on the side, and there’s a Micro-USB to USB-A cable in the box along with a wall plug. You can power the dongle via a USB port on your TV, and if you don’t have one available, you can plug it into the bundled power adapter.

The Mi TV Stick costs the same as the Fire TV Stick, but it runs Android TV instead.

The best part about the Mi TV Stick is that it offers a full-fledged Android TV experience. That gives it a distinct edge over the Chromecast, as you get a UI that lets you stream content directly instead of relying on your phone. Android TV also has a great selection of apps, and as it has Chromecast built-in, it works the same way as a regular Chromecast if you’re looking to cast content from your phone.

The Mi TV Stick is Xiaomi’s take on the Fire TV Stick, and the fact that you get Android TV here makes it an enticing product. There aren’t many budget Android TV streaming products from major manufacturers, and while the NVIDIA Shield TV dominates this segment, at $150 it costs nearly four times as much as the Mi TV Stick.

I like Android TV because it is cleaner than what Amazon offers on its streaming products. Content is prominently highlighted on Fire TV OS, but over on Android TV, the focus is on apps. Play Store has all the major streaming services and a few games, and you get more customizability when it comes to the home screen. I generally prefer a clean home screen, and with Android TV you get the option to disable the “ribbons,” the horizontally-scrolling list of content suggestions from services you use frequently.

The Mi TV Stick gives you easy access to all of your favorite streaming services. Netflix, Prime Video, and YouTube are installed out of the box, and you can install Disney+, HBO Max, Spotify, Twitch, and dozens more from the Play Store. 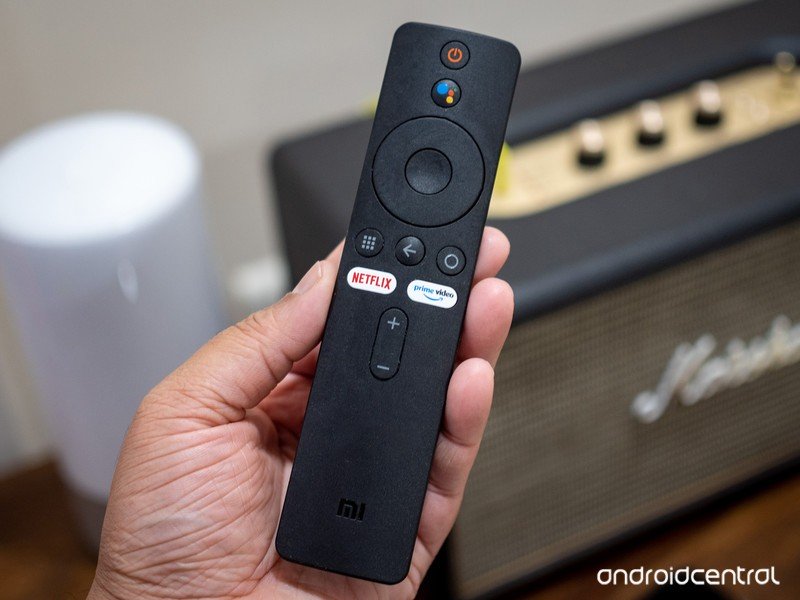 Coming to the hardware side of things, the Mi TV Stick is powered by a chipset that has four Cortex A53 cores, and you also get 1GB of RAM and 8GB of storage for installing apps from the Play Store and storing local content. The dongle has Wi-Fi ac and Bluetooth 4.2 connectivity, and I didn’t face any issues with Wi-Fi during my usage.

There are zero issues on the performance front, and you get a fantastic remote.

Xiaomi also bundles the same remote as the 4K-enabled Mi Box S, and it is one of the best remotes you’ll find on a streaming box that costs less than $50. The remote has a button for invoking Google Assistant, a D-pad for navigation, back, home, and menu buttons, volume controls, and dedicated buttons for Netflix and Prime Video.

I’ve used the first-gen Mi Box and the Mi Box S for several years, so I know what Xiaomi has to offer in this category. In day-to-day use, the Mi TV Stick is just as fluid as the Mi Box S, and that’s because the hardware is nearly identical here. The Mi Box S has 2GB of RAM, but it uses the same chipset.

While there was some lag initially on the Mi TV Stick, there was an out-of-the-box update that fixed the issue. I watched a lot of videos on YouTube and streamed the second season of The Umbrella Academy on Netflix, and I did not face any issues with content playback. I consistently got 1080p video and did not see any lag within Netflix’s interface at all.

Using the Mi TV Stick reminded me of Xiaomi’s budget Mi TVs. Xiaomi uses a similar chipset and 1GB of memory there as well, so the brand clearly knows how to optimize the hardware to deliver a lag-free usage experience. 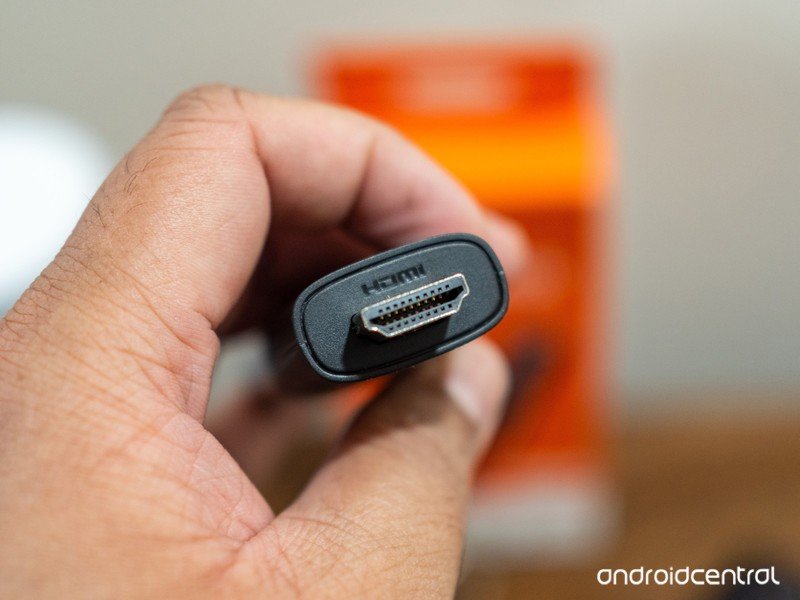 The Mi TV Stick doesn’t have any drawbacks. By limiting the Mi TV Stick to 1080p, Xiaomi eliminated the one issue that plagued the Mi Box S. The hardware on offer doesn’t really handle 4K, so it was a smart move by Xiaomi to focus on 1080p streaming here.

You may need to use an HDMI extension cable to plug the Mi TV Stick into your TV.

Because of the design of the dongle itself, you may run into issues plugging the Mi TV Stick directly into the HDMI port on your TV — particularly if you’re using the HDMI ports next to it. That was the case for me, so I had to use an HDMI extension cable. Amazon provides one out of the box with Fire TV Stick, but Xiaomi doesn’t do so here, so you will have to buy an extension cable if you run into this issue.

I would have liked to see an HDMI extension cable in the box, but other than that, there really isn’t anything missing with the Mi TV Stick. I’ve been using the dongle for just over five days now, and I’ll update this post after a few weeks once I get some more usage under my belt. 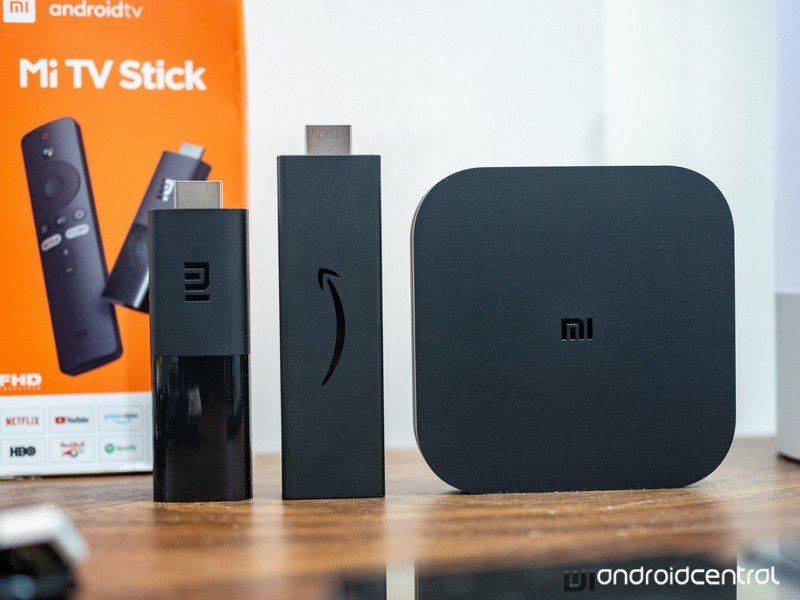 The obvious challenger to the Mi TV Stick is Amazon’s $40 Fire TV Stick. It delivers the same value and similar performance in day-to-day use, but you get Fire TV OS instead of Android TV and Alexa in lieu of Google Assistant. If you’ve already invested in Amazon’s ecosystem, the Fire TV Stick may just be the better option.

Then there’s the Google Chromecast. The third-gen variant is now available for $30, but you miss out on a remote, and there’s no UI here — you will have to use your phone to cast content to the Chromecast.

There’s also the $30 Roku Express, which lets you stream 1080p content and provides access to your favorite streaming services. The downside here is that there’s no Wi-Fi ac connectivity, and the Roku interface may not be to everyone’s tastes.

Of course, if you’re looking for a streaming box that can handle 4K playback, there’s always the $50 Fire TV Stick 4K or the $60 Mi Box S.

Xiaomi Mi TV Stick Should you buy it? 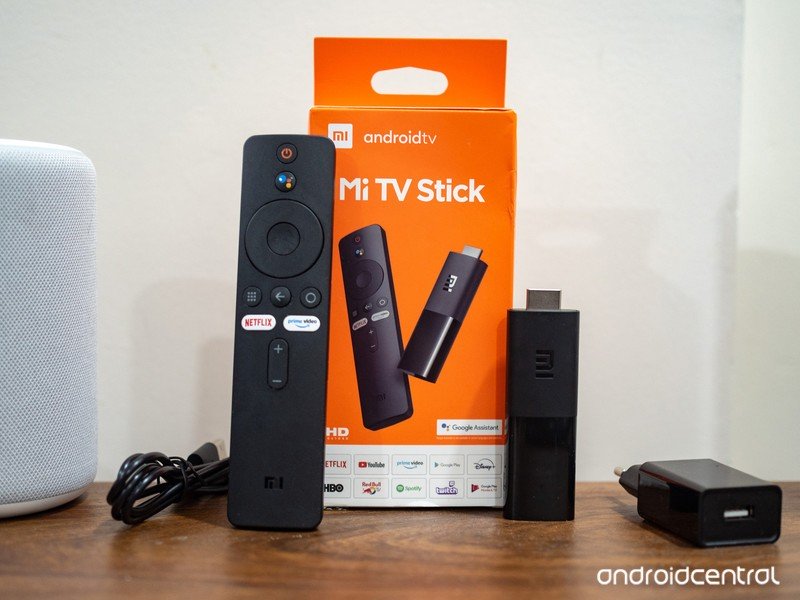 The Mi TV Stick is essentially a Fire TV Stick that runs Android TV. Everything from the branding to the orange packaging is clearly derived from Amazon, but the fact that you get Android TV here makes the Mi TV Stick a pretty great option for under $50. There aren’t many Android TV products in this category from major manufacturers, and Xiaomi is clearly taking advantage of that.

The Mi TV Stick is one of the best budget streaming dongles around.

If you have an older TV and need to add some smarts, the Mi TV Stick is the ideal product for your use case. You’re getting much more value for your money than with a regular Chromecast, and the remote is the same one that’s bundled with Xiaomi’s Mi TVs and the Mi Box S. The Mi TV Stick delivers lag-free performance in day-to-day use, there’s Chromecast built-in and Google Assistant integration, and overall you’re just getting great value.

As long as you’re okay with being limited to 1080p content, the Mi TV Stick is one of the best budget streaming boxes you can buy today.

The Mi TV Stick is going on sale in India shortly, and with the 4K-enabled Mi Box retailing for ₹3,499 $46) in the country, Xiaomi will be looking to price the Mi TV Stick that much more aggressively. If I had to guess, I see the Mi TV Stick priced at ₹2,499 ($33) in India, but we should know more on this front on August 5.

The Mi TV Stick is also debuting in Europe in the coming weeks for €39.99 ($45), and the dongle should make its way to the U.S. as well sometime this year.

The Mi TV Stick lowers the barrier to entry for Android TV. It delivers reliable performance in day-to-day use and gives you access to all of your favorite streaming services. The remote lets you easily invoke Google Assistant, and there’s Chromecast built-in for casting content from your phone. In short, the Mi TV Stick is the best Android TV streaming dongle you’ll find for under $50.

Work From Home Solutions: Why Work Monitoring Is Necessary For Business

The COVID-19 pandemic brought a lot of changes all over the world. This potentially deadly disease affected approximately 29.6 million worldwide, with...
Read more

Your Small Business Can Benefit From Using Online Accounting Software

Just because a business is small-scale, it doesn't mean that it shouldn't follow basic accounting principles. It is still a must to monitor...
Read more

In-between league fixtures, round three of the Carabao Cup takes place this week with a number of top Premier League
Read more