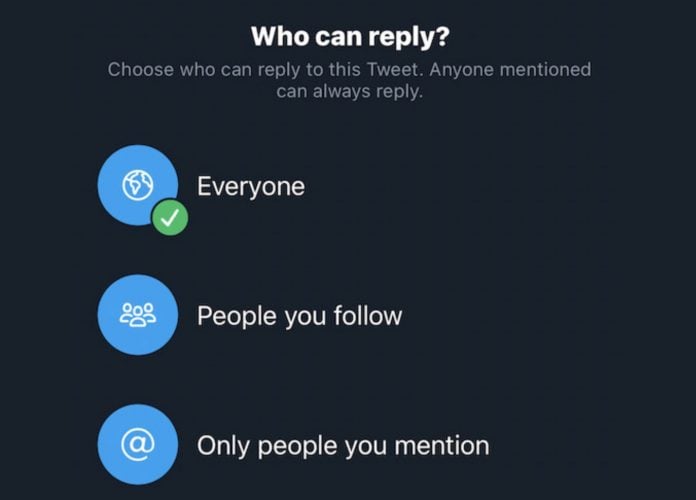 Twitter has updated its official iOS app to allow all users to limit who can reply to their tweets. The company has been testing the “conversation participants” feature with select users since May, but it now appears to be ready for a wider rollout.

“In May, we tested a new way to have a chat with exactly who you want, so you can create and consume more meaningful changes,” reads the update release notes on the App Store. “Now, everyone can try this new feature and choose who can reply to their tweets.”

The “everyone” represents how Twitter traditionally works and it’s the default setting that’s selected for every tweet, while the other two options limit replies. Tweets that have limited replies are labeled and the reply icon is grayed out so it’s clear to people that they’re unable to reply.

Even when replies are limited to followers or people mentioned in a tweet, people unable to reply will be able to view, Retweet, Retweet with Comment, and like the tweets.

The feature should help cut down on online abuse and harassment, and it could also potentially be used to promote more focused discussions on the social platform with a select few users.

Update: Some users are reporting that the feature is not accessible to them, despite updating the Twitter app to the latest version, suggesting it is still rolling out.Tag: Twitter
This article, “Twitter iOS App Now Lets All Users Limit Who Can Reply to Their Tweets” first appeared on MacRumors.com

Facebook
Twitter
Pinterest
WhatsApp
Previous articleUS to Purge ‘Untrusted’ Apps in New Measures Against China
Next articleEverything you need to know about the PS5: Release date, price, and more