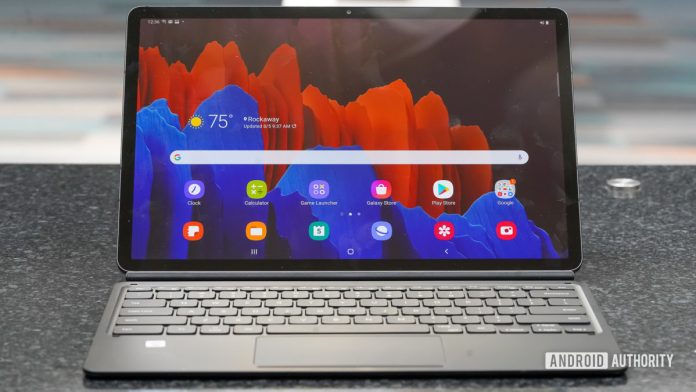 Samsung refreshed its flagship tablet line this week with the Galaxy Tab S7 and Galaxy Tab S7 Plus. The Tab S line is Samsung’s professional-grade slate meant to work as hard as it plays. You can read all the nitty-gritty announcement details here. Samsung lent us the Tab S7 Plus for a few days so we can offer our hands-on impressions of the device.

Find out what we think in the Android Authority Samsung Galaxy Tab S7 Plus hands-on.

With the new Samsung Galaxy Tab S7 and Galaxy Tab S7 Plus, the company is doubling down on what made the Galaxy Tab S6 so good. They bring a snappy processor, 5G support, the iconic S Pen, and Samsung’s productivity software.

The Galaxy Tab S7 Plus is striking — strikingly similar to another popular tablet on the market. The upgraded design certainly is elegant and sophisticated, but it apes the Apple iPad Pro perhaps a little too closely. How so?

Samsung’s new tablet comes in two sizes, an 11-inch model and a 12.4-inch model, similar to the iPad Pro’s 11- and 12.9-inch models. The chassis of both tablet lines is aluminum on the sides and rear panels. The Apple iPad Pro has distinct flat side edges and so, too, does the Tab S7 Plus. Even the colors, screen bezels, and USB-C port and speaker placements are similar between Apple and Samsung. Thankfully, there are some notable differences.

The Samsung Tab S7 Plus relies on a 16:10 screen format, making it rather wide when held in landscape orientation. The iPad still has a 3:2 screen ratio. In fact, the 12.4-inch Tab S7 Plus simply looks like a longer version of the iPad Pro. Other than the aspect ratio, the biggest difference is the metallic panel on the back that holds the S Pen stylus. Where Apple’s stylus adheres to the side edge (or top in landscape orientation), Samsung gave the S Pen a dedicated spot on the rear surface. It’s protected by the optional (but wholly necessary) keyboard accessory. 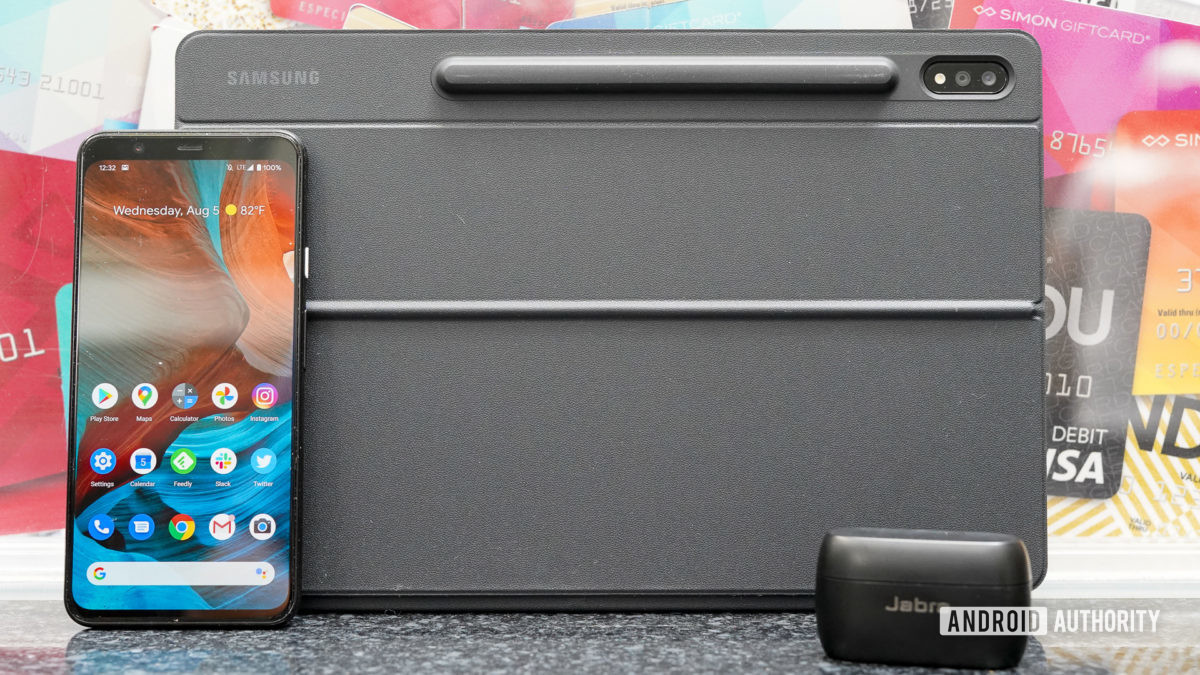 Samsung’s design may be too familiar, but the Tab S7 Plus itself is solid. The materials are top notch, the assembly is tight, and everything about it feels like a quality product. It’s a sizable piece of hardware at 285mm by 185mm by 5.7mm. I’d call it slightly heavy, too, at 575g, but certainly no more so than a laptop or Chromebook of the same dimensions. The screen lock and volume buttons, placed on the right edge (or top in landscape orientation) are excellent and offer perfect feedback. The SIM/microSD card slot is there as well. You won’t find a headphone jack, however.

In terms of overall workmanship, the Tab S7 Plus meets the bar set by Apple. 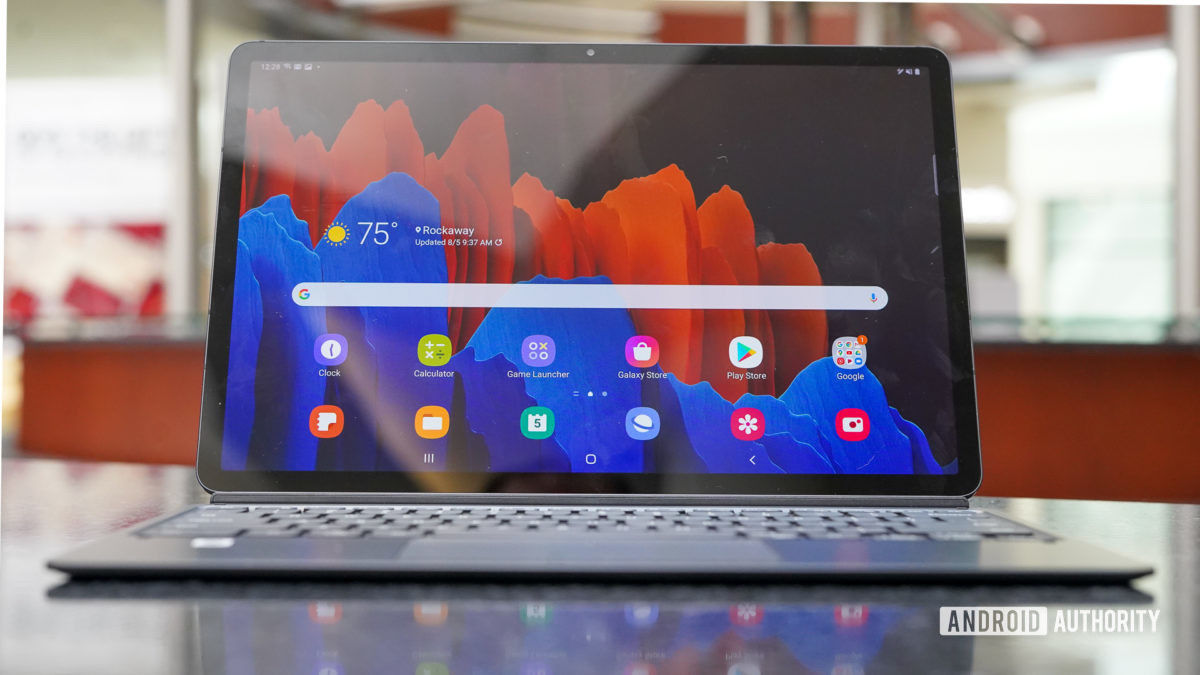 The 11- and 12.4-inch tablets actually rely on different screen technologies. The smaller tablet has an LCD panel, while the larger tablet has a Super AMOLED display. Either way, you get a 120Hz refresh rate for smooth performance.

The Tab S7 Plus offers 2,800 by 1,752 resolution and it’s dy-na-mite. I found it to be bright, sharp, and contrast-y in all the right ways. Viewing angles were excellent. HDR10+ Netflix videos looked amazing. The speed of the 120Hz panel means screen transitions, and, most importantly, games, looked really, really good. Perhaps my only complaint? How reflective the glass is and how easily the screen can be obscured by fingerprint grime.

Samsung really knocked it out of the park. I only wish we had the smaller Tab S7 against which to compare it. 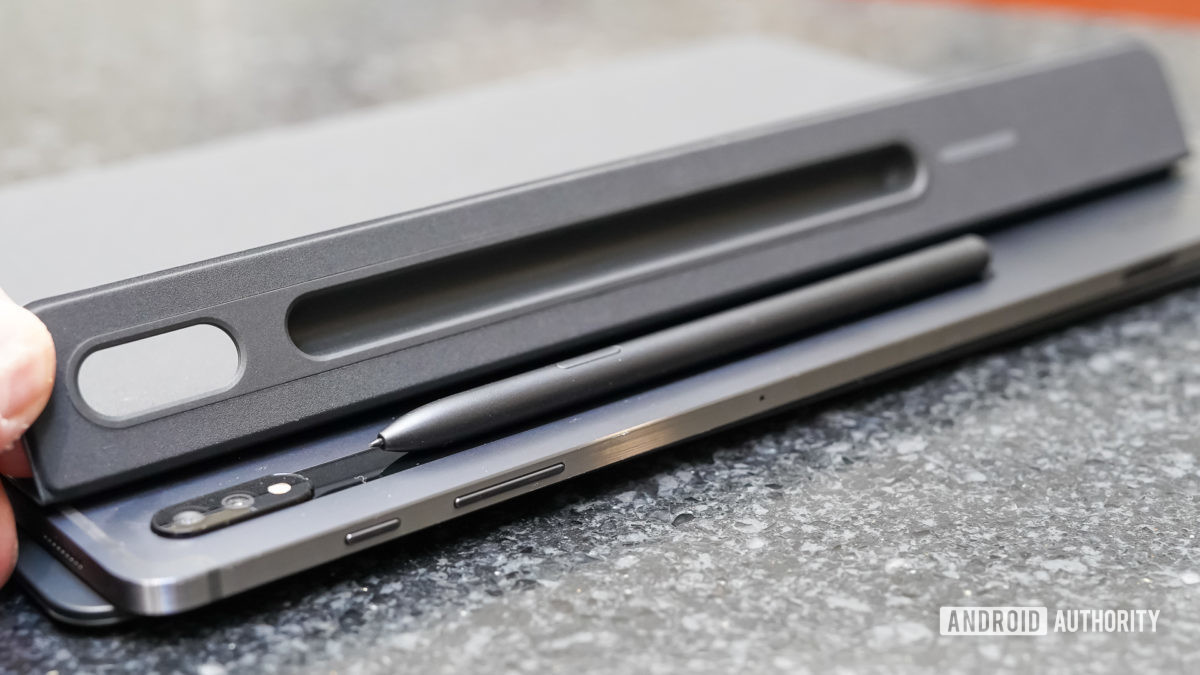 The S Pen included with the tablet is quite good. It’s a comfortable size and shape, making it a joy to use. It charges when magnetically attached to the rear of the tablet.

Samsung says the stylus has “more lifelike precision” that recognizes greater levels of pressure thanks to the Tab S7 Plus’ greater degree of press sensitivity. This means it feels even more like writing on a piece of paper.

Similar to the Galaxy Note 20 and Note 20 Ultra, the Tab S7 Plus’ S Pen offers new functionality. The latest Air Actions allow you to perform certain functions, such as skipping music tracks, by drawing gestures in the air. I found these difficult to master in a short time, but perhaps over time I’d find them easy to use.

The Samsung Notes app is improved with seamless syncing across phones, tablets, and PCs. Samsung Notes is able to more easily and accurately straighten out messy text. Further, it has more power over PDFs, making actions such as highlighting text more natural and simple. Tapping a written note takes you to that spot in the associated audio.

DeX, Samsung’s productivity user interface, is now wirelessly enabled, allowing you to cast your screen to a TV or monitor. Moreover, DeX is faster than ever. I found it easy to call up and dismiss on the Tab S7 Plus. 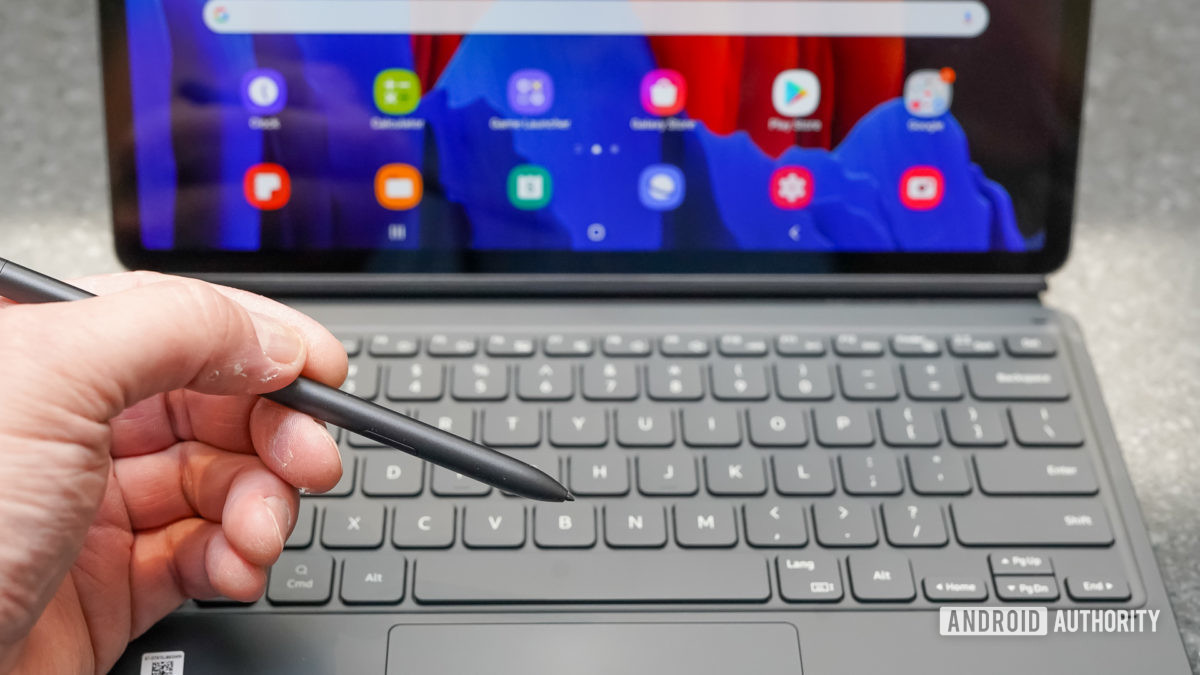 Together, the S Pen and DeX powers are much improved and we look forward to testing them for real. Samsung didn’t say if the Tab S7 Plus is party to all the same Microsoft goodies as the Note 20 series.

See also: Where and when you can buy the Samsung Galaxy Note 20 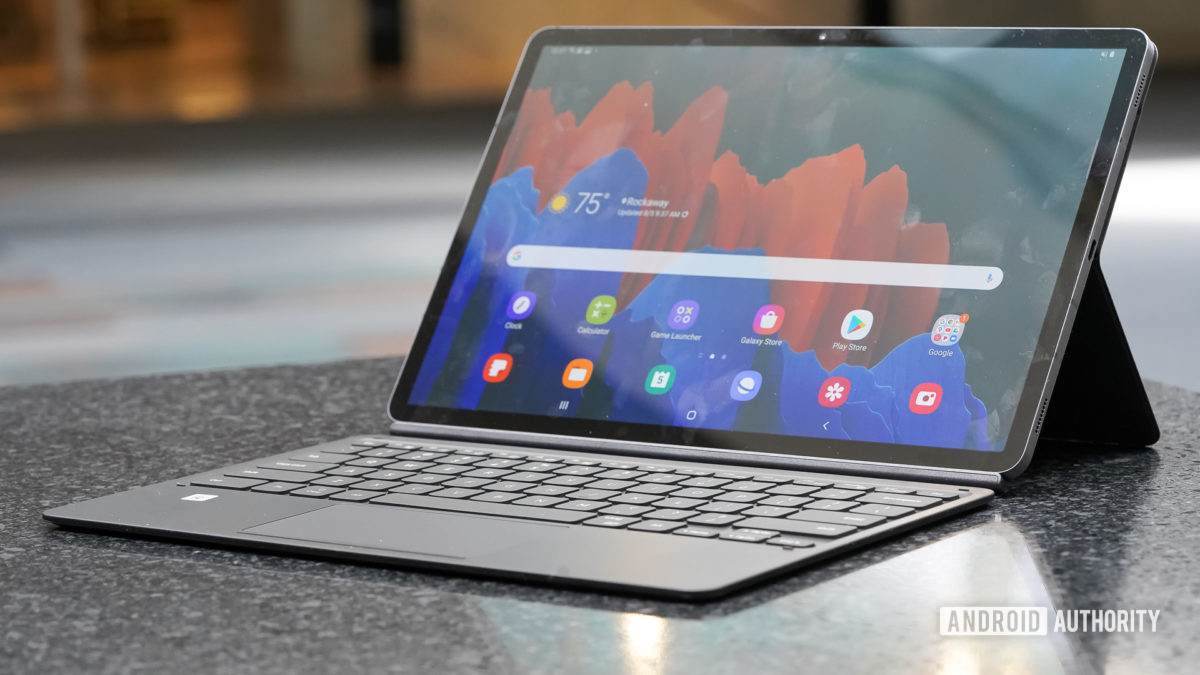 This $850 tablet absolutely needs some protection. Carrying it around sans case is asking for trouble. Moreover, the tablet cannot stand on its own. That makes the folio keyboard accessory absolutely necessary as far as I am concerned. Thankfully, it’s quite good.

The accessory comes in two parts that work together to support and protect the tablet. A magnetic panel snaps onto the rear and includes an adjustable kickstand. A flap covers the S Pen and is easy to flip open and closed. You can use this one part of the case by itself if you wish. The lower half of the case magnetically attaches to three pogo pins on the bottom edge of the tablet. These power the keyboard and hold it to the chassis. 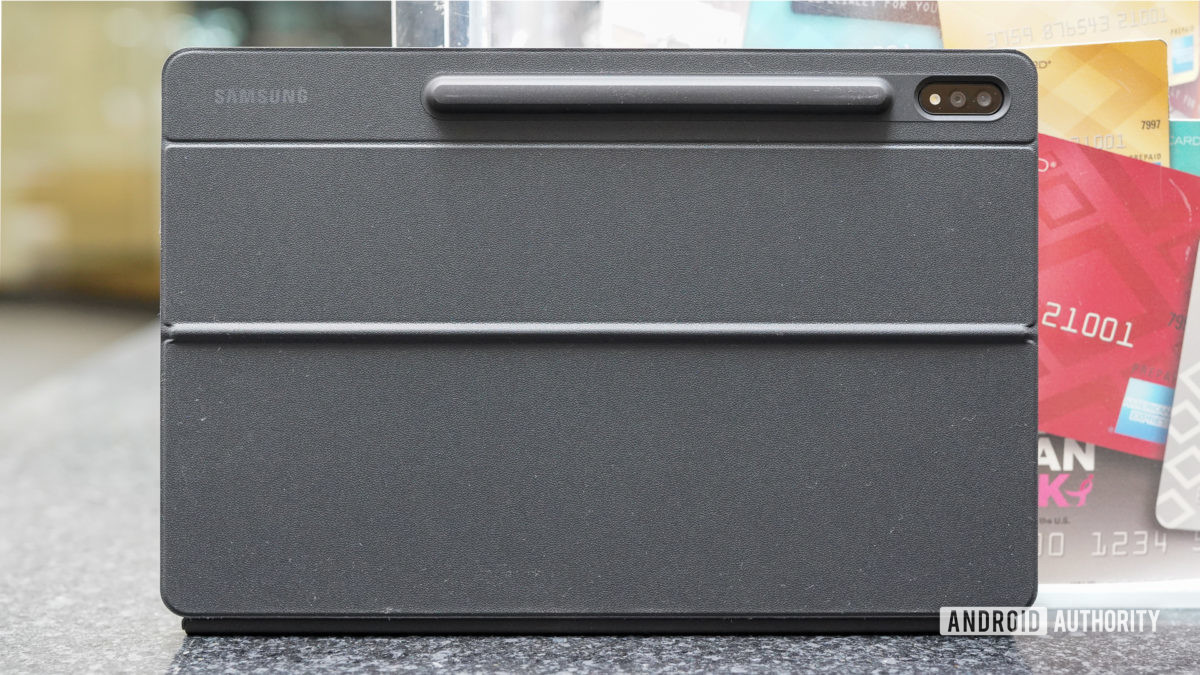 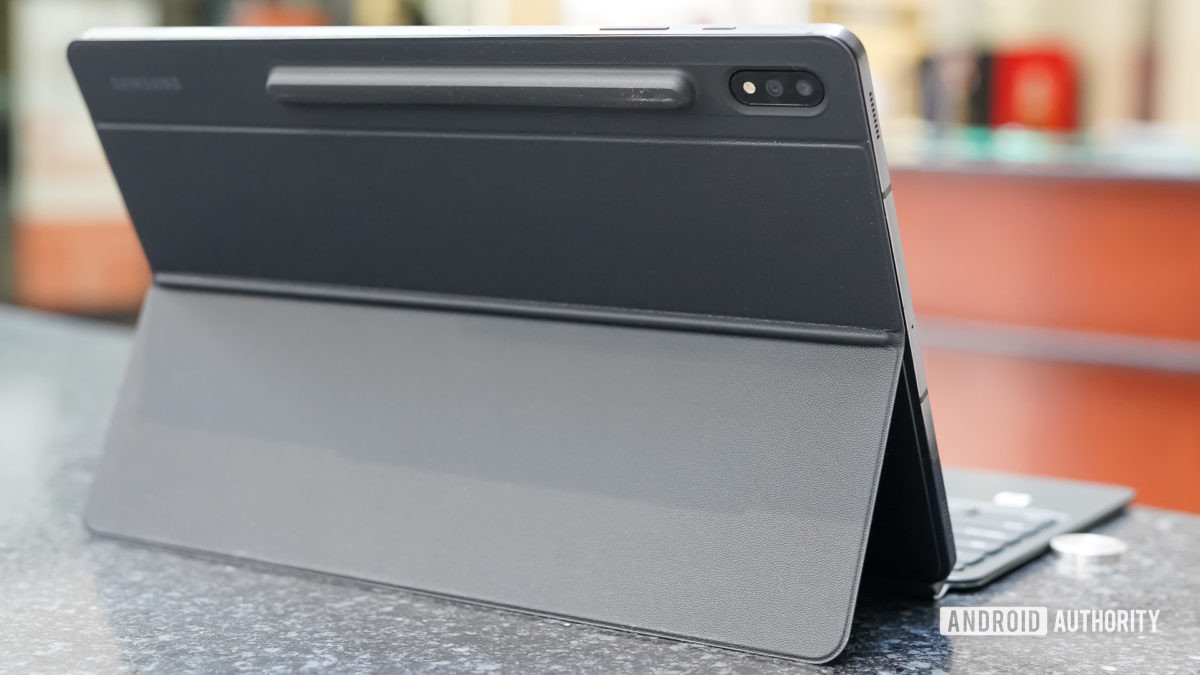 In my short time with the keyboard, I came away impressed. The size, shape and action of the keys is excellent. I was able to punch through some text quite easily and accurately. I particularly appreciated the row of function keys that made it easy to adjust the volume, screen brightness, and such.

The trackpad is a lifesaver. As much as I love working with tablets, I miss the accuracy and speed of a good trackpad. Samsung made the trackpad larger and more responsive. It’s not excellent, but it more than suffices. 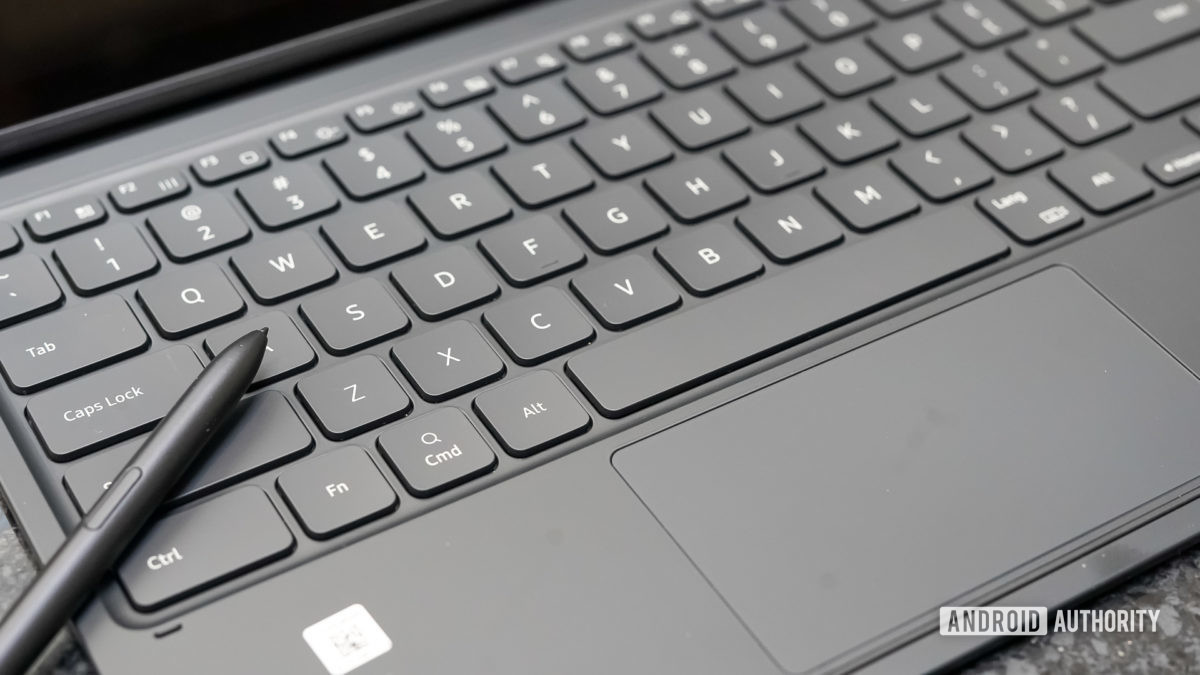 I wouldn’t consider buying the Samsung Galaxy Tab S7 Plus without the keyboard accessory.

We really liked last year’s Galaxy Tab S6. Given the enhancements all around, we think the Tab S7 and S7 Plus have lots of potential. Samsung says the two tablets will reach the market later during the third quarter. We’ll offer a full review of the tablet then, including a rundown of performance, 5G, and more. Until such time, please be sure to offer your own thoughts in the comments below.

With the new Samsung Galaxy Tab S7 and Galaxy Tab S7 Plus, the company is doubling down on what made the Galaxy Tab S6 so good. They bring a snappy processor, 5G support, the iconic S Pen, and Samsung’s productivity software.