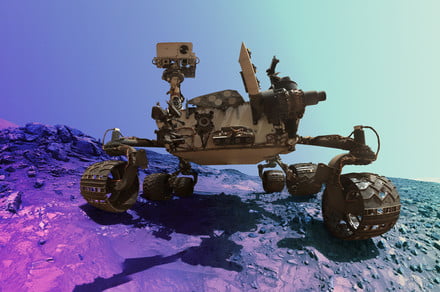 Welcome to another edition of Robots Everywhere, a show that chronicles the slow but steady takeover of our future robot overlords, and shows you how they’re making their way into practically every facet of modern life. On this episode, we take a look at robots in space, and how different types of automated machines and robots are helping us explore the surface of Mars, as well as land here back on earth.

There are three categories of robots we’ll be looking at when it comes to space: Explorer bots, helper bots, and automated systems. Each of these categories is made for a distinct purpose, and while some look more like traditional robots than others, all work with little to no human input.

First off are the explorer robots. Because space and other planets aren’t very hospitable to humans, we have been using robot explorers to help us gather information about distant planets, moons, and asteroids while we stay safely here on earth. The most well-known of these explorer robots are the ones we’ve sent to Mars. In 1997, the Sojourner robot — weighing in at 23 pounds and rolling at a top speed of 0.02 miles per hour — was the first of five different explorer robots sent to Mars. It lasted about 85 days and made it about 100 yards before running out of juice.

After that, two more explorer robots, Spirit and Opportunity, were sent with the mission of finding evidence of water. Within months, the rovers succeeded, and we now know Mars did, indeed, have plentiful water on its surface. The Curiosity rover was sent in 2012, and was a far bigger rover than the ones before it, carrying even more scientific instruments. Its goal was to determine if Mars had all the ingredients necessary to host life: A lasting source of water and the chemical ingredients known to be the precursors of life. Curiosity is still roving around, sending pictures directly to its own Twitter account.

Currently on its way to Mars is the new Perseverance rover, the biggest, heaviest, and most advanced rover ever sent. Instead of just looking for water and other preconditions of life, Perseverance will hunt for direct evidence that life existed on the red planet.

Another category of space robots is the “helper bots.” These assist astronauts perform tasks that are too dangerous or difficult for the astronauts to do themselves, from complex docking maneuvers, to handling payload, to essentially acting as a floating space Amazon Echo for crew members.

Finally, we have automated systems that can operate with little to no human input. While we may not think of these machines as traditional robots, because they can act and move autonomously, they are, by definition, robotic. The Mars Pathfinder spacecraft is a good example. Because of the communication lag between Earth and Mars, automated systems were used to land and navigate the craft by itself. Similarly, SpaceX is currently using automated “robotic” systems to land its Falcon 9 rockets.

The trend of robots taking the reigns and playing a bigger role in space exploration isn’t going to change any time soon. Robots already outnumber humans in space, and it will be increasingly advanced robots that we send in the future. Because of the limitations of our physical bodies and lifespan, robotic systems are the perfect way to help gather information that would be impossible for us humans.

The S20 FE is the most Android phone ever made, as well as one of the best.I get a lot
Read more

If you're looking for the best Roku streaming devices, then you've come to the right place! Roku has a bunch
Read more

Apple's iPhone 12 event is nearly upon us, and leaks and rumors have been flying around in the final days.
Read more