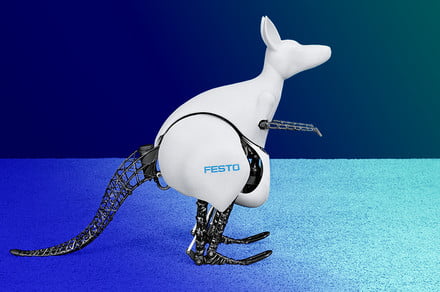 Welcome to another edition of Robots Everywhere, a show where we chronicle the slow but steady takeover of our future robot overlords, and show how they’re making their way into practically every facet of modern life. On this episode, we take a look at robots modeled after the animal kingdom, from machines that mimic the look and feel of our companion pets, to the robots that are inspired by specific parts of animals.

The German company Festo is a leading creator of robots that are inspired by specific parts of animals. For example, the company’s “bionic handling assistant” is a robot arm modeled after an elephant’s trunk, which gets rid of the hard, elbow-style joints you see on most other robotic arms. This gives a far greater range of flexibility and dexterity than most other gripping robot arms. In fact, it worked so well, the company also styled a robot arm that used suction cups much like an octopus arm to create a soft tentacle to grip objects. And the FlexShapeGripper mimics the grabbing action of a chameleon’s tongue, which can grab a huge range of objects, regardless of how they’re shaped.

Moving into robots that are designed to re-create actual animals, Sony has developed Aibo, a robotic dog that won’t poop, chew on your shoes, or make a mess of the house. There’s also Tombot, which is designed to act as a companion for the elderly. In fact, there’s an entire range of companion animals you can now choose from — from dogs to cats to seals.

There are also robots that are animatronic re-creations of real animals. These are used in movies, TV shows, theme parks, and even as research tools in the wild. Scientists have been able to use robot gorillas, dogs, and tortoises to study animals in their own environment and get close-up footage of animals in the wild.

Finally we have robots that are based on animals, but not meant to fully look like the animals they’re based on, such as the famous dog-like Spot robot from Boston Dynamics, which can do everything from walking down stairs to dancing to Bruno Mars. This category of animal robot also includes MIT’s cheetah bot, an ostrich-like walker robot from Agility Robotics, and an amazing kangaroo robot from Festo.

While the robotic animal kingdom isn’t quite as diverse as the real animal kingdom, utilizing the looks and movements of the animal kingdom has spurred some major and exciting advances in robotics, and will continue to do so into the future.