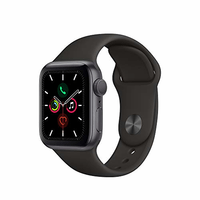 Are you itching to buy an Apple Watch but stuck between taking advantage of one of the several Apple Watch deals available today or waiting to see what discounts Prime Day 2020 brings to the table? If that’s you, this post can help. We have looked back at the pricing for the APple Watch Series 3 and Apple Watch Series 5 during Black Friday 2019, Prime Day 2019, and more recent sales to make some Prime Day Apple Watch price predictions at Amazon for 2020.

Please note our predictions aren’t based on insider pricing or leaks, nor are these set in stone. They may change as the months pass and we inch closer to Prime Day 2020. As such, we’ll continue to track Apple Watch pricing on Amazon and elsewhere. Analyzing past pricing and sales events, current prices, and recent trends generally result in reasonably accurate price range predictions.  We may tighten the ranges as we get closer to October’s (rumored) major event.

These predictions are only for the base GPS model of the Apple Watch Series 3 and Apple Watch Series 5. That’s because these versions of the Apple Watch are by far the most popular and are, therefore, the watches buyers wait to go on sale before pulling the trigger. There likely will be discounts on the Cellular + GPS variants too, but it’s safe to say their prices won’t drop as low as their GPS counterparts.

Should you wait until Prime Day 2020 to buy an Apple Watch?

At this time of year, your strategy depends on which Apple Watch series you want and how urgently you need it. Based on the price data, if you’re interested in an Apple Watch Series 3, chances are today’s $169 for the 38mm model and $199 for the 42mm variant are about as good as they’ll get for Prime Day 2020. On the other hand, if you want an Apple Watch Series 5, the outlook is good that you can save if you wait until Prime Day in October. Of course, for the Apple Watch Series 5, if you must have the watch as soon as possible because of your plans, today’s deals shave a bit off list price so you still can take satisfaction that you didn’t pay full retail price.

Apple’s latest and greatest smartwatch is “close to perfection” according to our reviewer. This is the standard-sized 40mm model with built-in GPS, always-on retina display and 30% larger screen.

Apple Watch Nike Series 5 lets you track your workouts and listen to Audio Guided Runs with the Nike Run Club app and the Always-On Retina display.

The larger Apple Watch Series 3 which, at 42mm, is still a bit smaller than the sized-up Series 4 and Series 5.

Apple Watch Series 5 has a display that’s always on and helps you navigate with the built-in compass. It also lets you check on your heart and track your workouts.