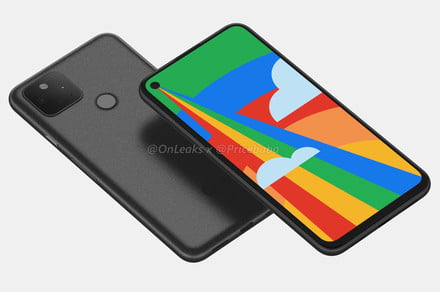 Earlier this week, alongside launching the Pixel 4a, Google teased a pair of unreleased phones: the Pixel 4a (5G) and Pixel 5 it plans to launch later in the fall. Now, a series of leaks have revealed just about every detail you need to know about these phones.

A report by Steve Hemmestoffer (@OnLeaks), who has a reliable track record, offers the best look (in collaboration with Indian outlets, 91Mobiles and Pricebaba) at the Pixel 4a (5G) and Pixel 5 through a bunch of high-resolution renders. Both the phones share a similar, minimalistic design that can be found on the recently announced Pixel 4a as well. There’s a nearly edge-to-edge screen on the front with a tiny cutout for the selfie camera and a square-ish camera housing on the back.

Interestingly, Google is set to bring back the physical rear-mounted fingerprint reader — that falls in a line with earlier rumors which suggested the company will be abandoning its facial recognition radar-based tech. While there’s not much to differentiate the Pixel 4a (5G) and Pixel 5 visibly, they won’t feel the same. The Pixel 4a (5G) will reportedly feature a plastic shell to cut costs and the Pixel 5 will likely opt for an aluminum exterior coated with a polycarbonate material — identical to last year’s Pixel 4.

As per another report by Android Central, the Pixel 5 will feature a 6-inch OLED screen with a refresh rate of 90Hz. It will run on Qualcomm’s latest, 5G-enabled processor, the Snapdragon 765G, and 8GB of RAM. Google is also expected to bundle IP68 water and dust-resistance rating and 5W reverse wireless charging that will allow you to top up other compatible devices by simply placing them on the back of the Pixel 5. Further, it will have a standard camera backed up by a secondary ultra-wide lens.

Although Android Central doesn’t share any battery specifications, a different leak that shows the Pixel 5 and Pixel 4a (5G) in the wild, claims it will have a 4000mAh pack.

The Pixel 4a (5G), on the other hand, will likely share the same hardware as the Pixel 4a except for a bigger 6.2-inch display and of course, support for 5G networks. Google has already confirmed it will cost $499, $150 more than the smaller Pixel 4a.