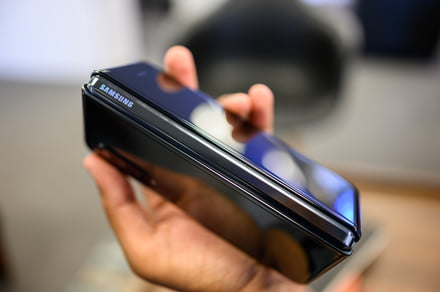 Samsung is proving that its serious about foldable phones. The company announced its third such device, the Galaxy Z Fold2, at the Galaxy Unpacked 2020 event on August 5. It follows the most recent Galaxy Z Flip smartphone, but is actually a successor to the original Galaxy Fold, as it folds like a book rather than a clamshell. It’s a significant upgrade too, as Samsung has responded to the main complaint we had about the first version — the size of the outer screen.

When the Galaxy Z Fold2 is folded up, the outer screen now has an edge-to-edge design and measures 6.2-inches. The original Galaxy Fold’s screen was just 4.6-inches and had sizable bezels above and below it, making using it awkward. Unfold the phone and the inner screen now measures 7.6-inches — up from 7.3-inches on the original — and has lost the notch in the top corner. The selfie cameras are now housed in an Infinity-O hole-punch on both the inner and outer screens.

While Samsung has announced the Galaxy Z Fold2, it has not shared all the details yet. We don’t know what processor is inside, or the camera array either. We do know it will come in Mystic Black or Mystic Bronze, a color that looks superb on the new Galaxy Note 20 series, and also that Samsung has teamed up with fashion house Thom Browne to create a limited edition model. Samsung also collaborated with Thom Browne for the Galaxy Z Flip, releasing a special edition in a custom color scheme earlier this year.

Crucially, we don’t know how much Samsung will charge for the Galaxy Z Fold2. The Galaxy Fold cost $1,980 when it was eventually launched in 2019, after a series of issues delayed the phone’s release. The Galaxy Z Flip costs less at $1,380. We’d like the Galaxy Z Fold2 to come in somewhere in-between these two prices, but with the advancements in technology, it’s possible this new phone will be even more expensive than the original.

Samsung isn’t the first to release a folding smartphone with an edge-to-edge screen on the outside. Huawei’s Mate X and Mate Xs use a different folding design that utilizes a single screen that folds together in the middle, so the same display is used when the device is open and closed. The Mate Xs is not officially available in the U.S.

We’ll update this story as soon as more details are available.

How to use Roll20

Whether you have a dedicated adventuring party or are looking for a group, Roll20 makes playing and GMing TTRPGs like D&D and V:TM easy as defeating a flumph.
Read more

VIP SALE! Save an extra 40% on apps and software

We’re back with another limited-time sale for various items in the AndroidGuys Deals Store! This time around the VIP SALE, which runs September 18-21, is your chance to save an extra 40% on apps and software.The prices we have in the AG Deals Store are already really low, but we’re more than happy to offer a coupon code for more savings. Enter the coupon code VIPSALE40 at checkout and we’ll drop the price by an extra 40%.Valid September 18-21Here’s a handful of some of the most popular apps and software in the AG Deals Store. Look around, though, there are a lot of choices and nearly all of them are eligible for the discount.The Social Distancing Lifetime Subscription Bundle Ft. Rosetta Stone – $120Power Through Important Books & Interesting Topics in Just 12 Minutes Each with Access to 385 Book Summaries and CountingFor the First Time Ever, Get Access to Learn All 24 Languages on Rosetta Stone’s Award-Winning SoftwareBest-Selling VPN Of All Time! KeepSolid Protects Your Online Activity & Lets You Browse Without Restrictions for LifeLingvaNex Translator: Lifetime Subscription (Desktop and Mobile Bundle) – $48Lingvanex Translator was created with the mission to enable people to read, write, and speak different languages anywhere in the world. It’s an excellent translation and dictionary app with the main function of translating text, voice, images, websites, and documents. It works on a wide range of platforms including iOS, Android, macOS, Windows, and more so you can start translating media in more than 112 languages instantly!KeepSolid VPN Unlimited: Infinity Plan (10 Devices) – $36Whether you’re using a private internet connection or public Wi-Fi, your online privacy and security is far from guaranteed. With top-rated solution VPN Unlimited, you can regain control over your digital life with full security and anonymity online. There are no speed or bandwidth limits, so you’ll still enjoy full browsing speeds, without the dangers of leaving your data exposed or the geographic restrictions set on certain websites abroad (think content viewing websites like Netflix or Hulu).Enpass Password Manager: One-Time Premium Lifetime License – $15Our everyday life is filled with too many passwords and various types of credentials. Use Enpass password manager to organize everything in one place securely. It also takes care of your credit cards, identities, social security number, and all the credentials you need handy in your daily life. And the best thing, none of your Enpass data is stored on servers; instead, it is stored locally on your device. You can sync it through your own trusted cloud account, all ENCRYPTED!!Restflix: Restful Sleep Streaming Service Subscriptions – As low as $18Restflix is a revolutionary streaming service designed to help users fall asleep faster and rest better. With 20+ personalized channels full of sleep meditations, bedtime stories, calming visuals, and binaural beats to harness the brain’s responsiveness to sound and help create a meditative, restful state. Through the use of sleep meditations, bedtime stories, peaceful and serene natural views and sounds, better sleep is achievable. Along with using Restflix for developing better sleep habits, it can also be a great tool for relaxation and mental healing.
Read more

Everything you need to know about Final Fantasy 16 for PS5

The Legacy of the Crystals has shaped our history for long enough.The latest in the epic Final Fantasy series has
Read more