Home News Meet the MIT artist who builds with fungus and paints with swarms...
News 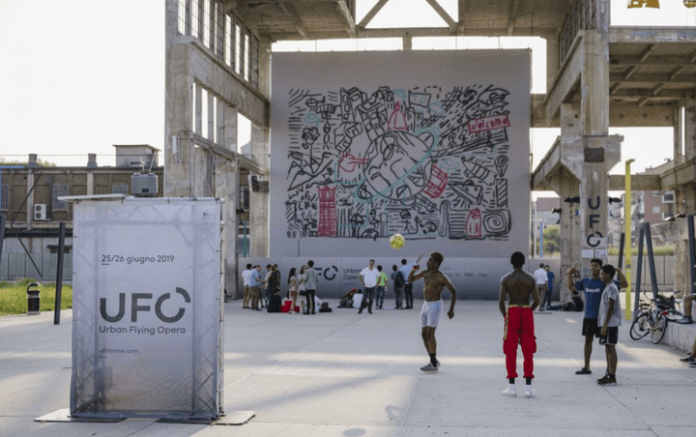 If you were walking through a park and saw four drones painting a giant, 46-foot graffiti mural, you would probably stop and gawk for a while. But in order to get a full sense of the planning, philosophizing, and historical cross-checking that went into such a wild display of techno-art, you’d have to sit down for a talk with the man behind it: Artist, designer, and Massachusetts Institute of Technology professor Carlo Ratti.

So that’s exactly what we did. Digital Trends caught up with Ratti to discuss his past and future projects, and how he manages to blur the lines between architecture, engineering, and digital art.

The team at Ratti’s studio, Carlo Ratti Associati (CRA), regularly develops ideas that seem both amazing and bizarre. In Zaragoza, Spain, his team constructed a building with raining water curtains for walls. In Paris, the group built a human-powered gym that floats down the Seine. For Milan’s Design Week, Ratti made a statement about the importance of recyclable materials and grew The Circular Garden, which had a kilometer of mushroom arches, many of which were tall enough to walk through.

We asked Ratti how he conceives and validates these ideas and he launched into a zigzagging tour through Western art and history.

What would Ernest Hemingway’s ghost make of the Makr Shakr, Ratti’s robotic bartender that can mix customized drinks to order? That answer may depend on the machine’s ability to make a stiff mojito. The Makr Shakr’s creator sees the metal bartender as more than just a Futurama-ready gag. If there is a through line to Ratti’s designs, he says it’s creating things that enable people to connect with each other and connect with nature. The Makr Shakr platform allows people to program and share drink recipes, creating human connections where there was once just screaming over loud music.

Ratti’s paint-by-drone project has its roots in a 2015 spectacle. That year, Milan’s edition of the World’s Fair commissioned CRA to work on a project about selling food. The result? The Supermarket of the Future: A 10,000 square-foot concept store where products were displayed on interactive tables. When a shopper reaches for an item, product information, including origin and age, appears, hovering above on a digital mirror like an augmented reality display.

Before completing The Supermarket of the Future, its creators needed to outwit a big design challenge: The World’s Fair wanted the grocery built in a large container the shape of a shoebox. “They told us: Do whatever you want outside of the shoe box,” recalls Ratti. “For instance, you could cover it all with LEDs. And I didn’t like that idea at all.” For someone whose work usually comes with a big dollop of digital, the professor is surprisingly not a fan of pixelated images. “We’re already spending too much time in front of screens,” he says.

So how did the CRA team devise a way to make The Supermarket of the Future look forward-thinking while avoiding a digital display? They erected a giant wall and made a “Vertical Plotter” to spray paint pictures onto it. The system converted digital images to analog in real time.

While spray-painted graffiti tags may be the obvious reference, Ratti says his team drew inspiration for the project from mankind’s original graffiti — the 30,000-year-old Chauvet cave paintings in the south of France, as well as Werner Herzog’s documentary about them, Cave of Forgotten Dreams. With that, The Supermarket of the Future connected back to the beginning of human history, tapping into a “timeless way of customizing the spaces we live in.”

Ratti’s team walked away from the World’s Fair with several design awards, a Guinness World Record (for the largest plotter ever) and the idea for a gadget for anyone who’s bored with his or her whiteboard. The Scribit, as it’s called (one of the few products CRA manufactures and sells) is a hand-sized drawing machine that downloads digital files and draws them on any vertical surface. The Roomba-shaped robot can ink out profit graphs on conference room walls or daily menus on bistro windows, but it’s unlikely anyone who buys it will make the stone-age connection.

The roots of creativity

Born in Turin, Italy, Ratti comes from a family of engineers and architects. His grandfather was a civil engineer who worked on projects in Africa and South America. Alessandro Antonelli, the architect of one of Italy’s tallest 19th-century buildings, the Mole Antonelliana, was a distant cousin. Ratti’s worldly curiosity led him out of Italy for college, to study engineering in France. After graduation, he forwent a potentially lucrative job and relocated to England to study architecture and computer science at the University of Cambridge.

“A lot of people thought that was kind of a crazy path — why would you do it?” he admits. “At the beginning, when you look at it, it didn’t make much sense.” He says he was just following his heart. It wasn’t until early 2000, while he was working on a Fulbright Fellowship at MIT’s Media Lab, that those various areas of interest gelled into a cohesive perspective.

The 2002 collaborative project Sandscape surfaced the combination of analog and digital technology Ratti has made into a recurring theme. Sensors tracked peaks and valleys participants shaped in sand to design computer landscapes. Such work led to an invitation to help start MIT’s Sensible City Lab, where students learn and theorize about the impact of design, technology, and sociology on large communities.

Ratti’s MIT office in Cambridge, Massachusetts, overlooks the Charles River. Before the COVID-19 international lockdown, he rarely spent more than 50% of the year in one place. The offices for his architecture firm are in New York and Turin. His work regularly takes him to several other countries. CRA is also designing a pavilion for the upcoming Dubai World Fair (made out of recycled materials like coffee grounds) and a floating garden island for the Lugano, Switzerland, waterfront.

“A lot of great ideas come when you’re in unexpected places, when you’re looking at something new and then you create new connections,” he says.

Ratti hasn’t filled his desk with the stylish tchotchkes that often adorn designer workspaces, preferring a “nomadic” existence. Even many of his cherished books are now in storage. As Director of the Sensible City Lab, he helps teach classes like “The Urban Citizen” about how citizenship is changing because of technology.

How does he instruct students to sharpen their bullshit detectors? It isn’t quite so easy, Ratti admits. In search of clarity, he likes to push ideas to the extreme.

“If you take a design and you try to exaggerate certain components, you can really see if it works or not — you can better understand, better develop your bullshit detector,” he says. He also takes influence from The Radicals — a ‘60s architecture collective — and their use of reductio ad absurdum, a way of validating an idea by demonstrating that the opposite scenario is absurd. Lately, that line of thinking has been applied to ways CRA can help health medical professionals and stay-at-home citizens make it through the pandemic.

While many cities have been converting convention halls into temporary health centers, and building tent hospitals in parks and parking lots, Ratti notes these spaces lack the proper ventilation to make them safe for patients and medical professionals. “Our question is: Can we do anything that’s fast to deploy as a makeshift hospital, but also safe?”

The answer: A temporary hospital room named the Curapod, built inside a 20-foot shipping container outfitted with biocontainment equipment. While the suggestion may seem like a moonshot project, CRA has already convinced an Italian bank to foot the bill for a prototype, which is almost finished.

Even if Curapods aren’t adopted worldwide, Ratti still considers the open-source project a success, given that 2,000 people have been involved in either helping its conception or have downloaded the designs with expectations to build something similar.

“Design is about a mutation, a way to look at how to change our interaction with the environment,” he says. “But in order to see if an idea really works or not, you want to go all the way down and produce it, in order to see if it can really change people’s lives.”