Facebook’s Merging of Instagram and Messenger Chats Gets Underway 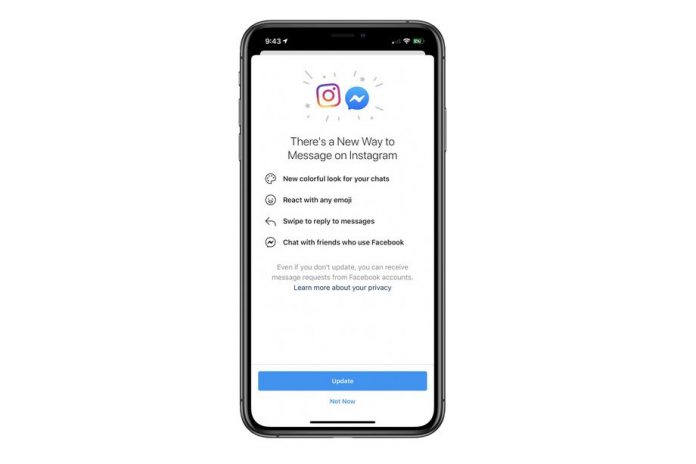 Facebook’s long-term plan to integrate Messenger, Instagram, and WhatsApp chat platforms appeared to kick into gear over the weekend as Instagram users in the U.S. were notified of a “new way to message” on the photo-sharing social network that merges the app’s chat feature with Facebook Messenger.

Image via The Verge
As a result of the merging of the chat services, the change means Instagram users will be able to chat with Facebook users and vice versa. After the update is applied, some features previously only available on Facebook Messenger can be accessed in Instagram, including colorful chats, more emoji reactions, and swipe-to-reply.

In addition, the regular paper airplane DM icon in the top-right corner of the Instagram UI is replaced by the Facebook Messenger logo, and the Messenger features noted above are applied.

Image via The Verge
However, as The Verge notes, it’s still not possible to message Facebook users from Instagram, but unification is clearly the plan, as Facebook explained back in January 2019.

Facebook CEO Mark Zuckerberg reportedly wants all the apps to incorporate end-to-end encryption, like WhatsApp does now. When the unification is complete, the services will continue to operate as their own standalone apps, but the company’s work will make them interoperable with one another.

Ultimately, by stitching the apps’ infrastructure together, Zuckerberg seeks to increase keep their billions of users highly engaged inside the Facebook ecosystem, in an attempt to ward off rival texting apps like Apple’s iMessage. Tags: Facebook Messenger, Instagram
This article, “Facebook’s Merging of Instagram and Messenger Chats Gets Underway” first appeared on MacRumors.com