Home News Bose SoundTouch 300 vs. Sonos Beam: Which should you buy?
News

Bose SoundTouch 300 vs. Sonos Beam: Which should you buy? 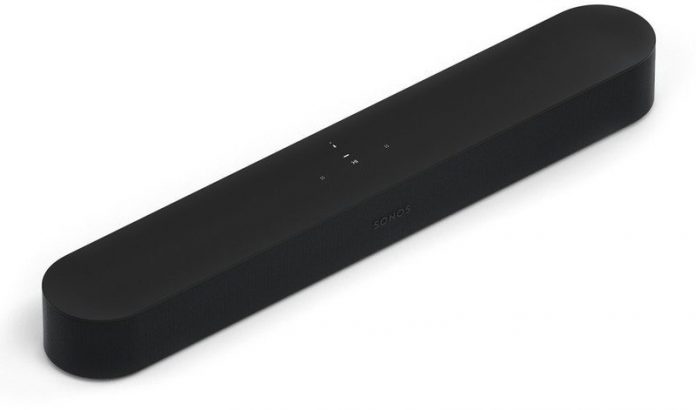 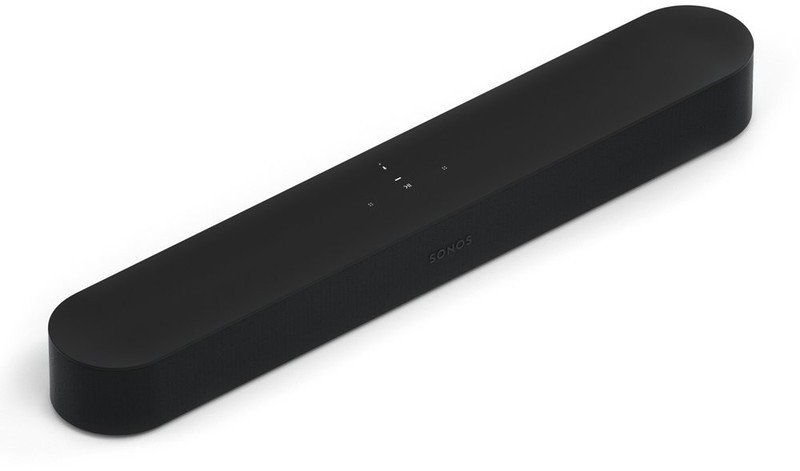 This compact 3.0 soundbar offers surprisingly powerful sound from a soundbar that’ll fit easily under most TVs. It offers native streaming of most music services, along with multiple built-in assistants for easy voice commands and AirPlay 2 for multi-speaker connectivity. You can upgrade to 5.1 by buying a subwoofer and rear speakers, but it stands well enough on its own if you don’t need surround sound and own an ARC-enabled TV.

Bose delivers excellent features and support (as always) with its SoundTouch 300. It handles high-quality streaming thanks to ARC support and HDR 10 passthrough, and can natively stream most music services using Wi-Fi and the Bose SoundTouch app. However, its average sound performance will tempt you into investing in a Bose subwoofer, and it lacks some features in newer Bose soundbars like eARC or built-in voice assistants.

Rather than overspend on a fancy home theater with surround sound, most buyers just want an affordable upgrade on TV speakers, with punchier bass and clearer dialogue. Bose and Sonos both have solid 3.0ch soundbars that fill that niche, though with very different advantages. Sonos Beam offers a dainty, stylish form factor with disproportionately solid sound and excellent voice assistant support, while the Bose SoundTouch 300 provides 4K pass-through for older TVs, better calibration for Android users and more connectivity options. This article should help you decide which perks will matter most to you. 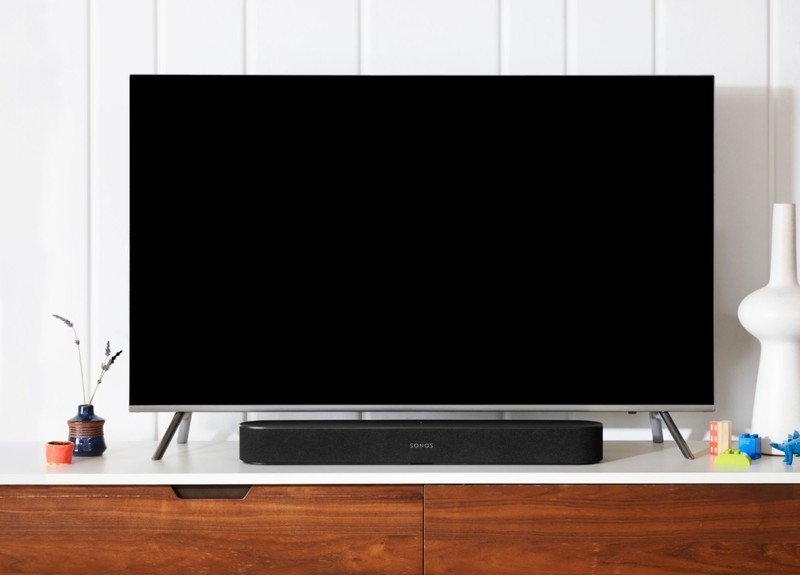 Both the SoundTouch 300 and Beam are 3.0-channel soundbars. You can purchase compatible subwoofers and additional speakers to upgrade to a 5.1-channel setup, but they only pair with Bose and Sonos products, respectively, and will cost you extra. So while you can upgrade down the line, you want something that stands on its own in the meantime.

Visually, your choice comes down to preference. The Beam easily stands out against the long, black rectangular prism template of most soundbars, including the SoundTouch 300. It’s narrow and light, with a pleasing curve along the ends, touch controls on top, and LED status info in front. The SoundTouch 300 differentiates itself from the uniform, plasticky soundbar archetype with its wrap-around metal grille and glass top. Ironically, it lacks any touch controls on the unit.

Whichever soundbar you choose, it will have four full-range drivers and one tweeter. Any proprietary tech to improve performance differ in language but often accomplish the same things. Sonos adds three passive radiators meant to augment bass performance while Bose adds “QuietPort” tech meant to do the same thing. Bose uses “PhaseGuide” arrays to better spread sound throughout the room, while Sonos uses five Class-D amplifiers along the Beam’s front and edges for full sound spread.

In practice, the Beam truly excels in sound performance despite its small size thanks to its packed-in drivers. Buyers with a small- or medium-sized living room, in particular, will get excellent value from this soundbar. On the other hand, the SoundTouch 300 takes full advantage of its long width to create a wide soundstage that will work well for larger rooms.

Sonos’ lack of support for automatic calibration for Android devices continues to be a mistake.

To customize your soundbar to best fit your space, you’ll want to calibrate the EQ settings. Both Sonos and Bose offer auto-calibration tech that does it for you, but unfortunately, Sonos’ TruePlay calibration app is iOS-only, forcing Android phone owners to calibrate the settings for themselves. Bose instead ships its soundbars with an ADAPTiQ headset accessory that anyone can use. TruePlay and ADAPTiQ work essentially the same way: you walk around your living room while the soundbar sends signals to your phone or headset, until it has mapped your space.

If you’re fine with clean and restrained bass, both soundbars accomplish this, and don’t try to amplify it into something more artificially loud. Yet many buyers will want more oomph for their action movies or parties, which means purchasing a subwoofer. The original SoundTouch 300 subwoofer is no longer for sale, but you can pair it with the Bass Module 500 or 700. With the Beam, you can pair it with the Sonos Sub.

If you already own another Sonos or Bose device, these soundbars will link up easily with them to form a multi-room setup. Beam also has AirPlay 2 enabled, which makes it easier for you to control it with any iOS device. Otherwise, you’ll use the standard Sonos S2 app or Bose SoundTouch app to control your soundbar and natively stream content via Wi-Fi.

Built-in voice controls have become the norm for soundbars, but the SoundTouch 300 missed the memo. You can control it via Alexa commands, but only through a separate Amazon Echo speaker. Sonos lets you use Alexa or Google Assistant commands depending on your preferences.

Neither soundbar has the upward-facing drivers or surround sound necessary to handle more complicated audio processing formats like Dolby Atmos or DTS:X. Dolby Digital works with both, while only the SoundTouch 300 can process DTS content. Most content today uses both standards, so Beam users won’t be locked out of anything. DTS has higher bitrate encoding than DD; some AV experts say this proves DTS’ superiority while others say bitrate doesn’t equal quality.

SoundTouch 300 does connectivity better thanks to Bluetooth, 5GHz Wi-Fi and 4K passthrough, but both devices disappoint with just one HDMI input.

Connecting devices to and from your soundbar is fairly easy, as Sonos and Bose offer a variety of different options. You can connect either device to your router via Wi-Fi or directly via Ethernet port. Syncing devices to the Beam or SoundTouch 300 is easy over Wi-Fi, although the Beam only works over 2.4GHz. Bose goes beyond Wi-Fi and lets you connect your devices to the SoundTouch 300 with Bluetooth and NFC. Both soundbars can connect to your TV by means of optical cable or ARC-compatible HDMI.

The Beam doesn’t allow for 4K passthrough, and only has one HDMI input that you’ll need to connect to the TV. This means you’ll need an ARC-compatible TV that can successfully transfer data without much compression, or else your audio may sound underwhelming in spite of the Beam’s specs. The SoundTouch 300 does allow for 4K and HDR 10 pass-through, but also only has one HDMI input, which means out of all your consoles, Blu-Ray player and cable box, you can only choose one to benefit from this.

Bose SoundTouch 300 vs. Sonos Beam Get your money’s worth

When you’re buying a soundbar that has been out for a couple of years — like the Bose SoundTouch 300 or Sonos Beam — it’s important to consider if said device (and its price) still holds up against whatever top-rated soundbars have come out in the interim. One can easily argue that the Beam holds up to new competitors better than the SoundTouch 300.

For one thing, Bose appears to have mostly moved on from the 300 in favor of the Bose Soundbar 500 and Soundbar 700, which are priced similarly to the 300, have most of its best features and include built-in Alexa and Google Assistant. Most major retailers either no longer carry the 300 or sell it used, and not even Bose still sells the Acoustimass 300 subwoofer that’s supposed to pair with it.

For another, Beam may fall short of the SoundTouch 300 in some features, but not in terms of pure audio performance. It retails for far less than the SoundTouch 300, and you’ll still find it in stock at retailers that may put it on sale during the holiday season. With the Beam, you save enough money that you can comfortably upgrade it with peripherals down the line, while the cost of the SoundTouch and peripherals could buy you a Dolby Atmos-compatible soundbar with more channels and better performance.

The Beam stands above budget soundbars thanks to a stylish design, sonorous audio and support for Alexa, Google Assistant and Siri all at once. iOS users will enjoy AirPlay 2 connectivity and TruePlay calibration, while Android users will still get improved performance with the Beam’s default settings and some EQ tweaks. Also consider investing in the Sonos Sub.

3.0 audio that can fill any room

Bose designed a versatile soundbar with multiple means of connecting to your TV or devices based on whatever’s convenient. Its ARC and passthrough tech ensure solid audio-video sync and data transfer between your TV, soundbar and another device, as you enjoy Dolby Digital and DTS soundtracks. Owners of Alexa or other Bose speakers will particularly benefit from adding this soundbar to their smart home.