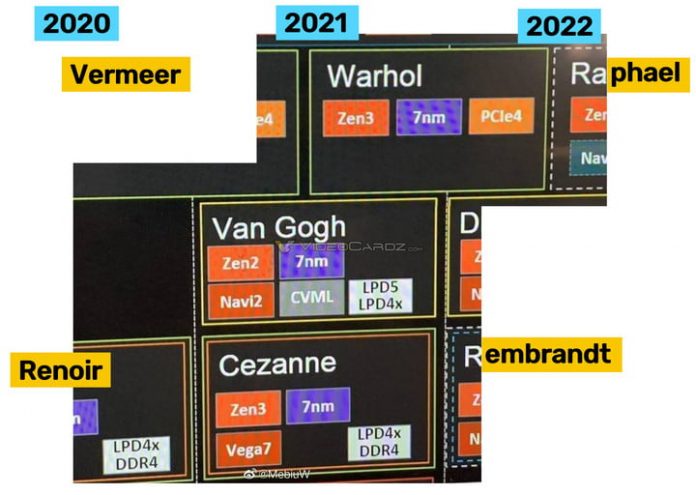 Though AMD’s latest Ryzen 4000 processors are commanding plenty of interest and the next-generation Ryzen 5000 processors have yet to launch, the company isn’t sitting idly by. A recently leaked road map suggests AMD’s Ryzen 6000 processors — the successor to the Ryzen 5000 chipset — may be ready as early as 2022 with a 5nm design utilizing the company’s Zen 4 architecture.

The processor currently goes by its code name of Raphael and bundles the company’s next-generation Navi 2 graphics architecture. According to the leak shared by Twitter user @MeebiuW, this suggests the Ryzen 6000 APU could integrate Zen 4 processor cores along with integrated a Navi 2 GPU design.

But before we arrive at the Zen 4-based Ryzen 6000 processors, there are still a few more items to get through on AMD’s roadmap, and 2021 will be a very busy year for the company. From the leak, the launch of Warhol, Van Gogh, and Cezanne are supposedly planned for a 2021 launch, with the latter being pegged as a successor to AMD’s Renoir but with a Zen 3 architecture.

Van Gogh, on the other hand, is designed for computer vision and machine learning, or CVML, so it could have a different — and more specific — purpose than other processors in the lineup. As an APU, Van Gogh is expected to be the first to integrate Navi-based RDNA 2 graphics. And while AMD has so far been inspired by famous artists in history for code names for its products, that may change after Van Gogh. The successor to Van Gogh, according to MebiuW, is said to be called Dragon Crest.

And Warhol is the last product in the 2021 road map, can either be a Vermeer Refresh or an interim product as AMD moves from its AM4 to AM5 socket, according to Videocardz. Warhol will be a desktop processor that’s likely expected to launch in mid-2021.

Facebook
Twitter
Pinterest
WhatsApp
Previous articleRAMPOW’s 61W wall charger is small in size and big on power
Next articleSurface Pro 8: Everything we know, and want from Microsoft’s next tablet