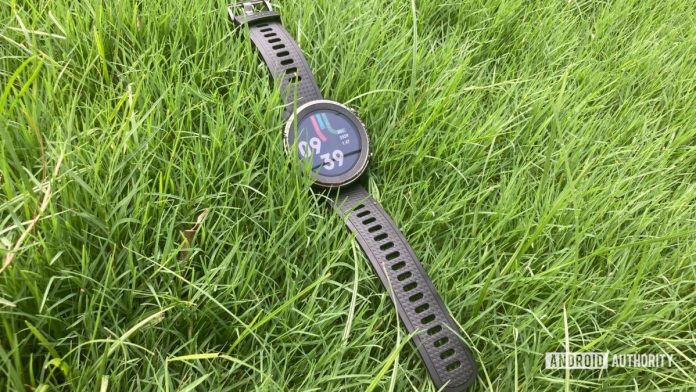 Chinese wearables company Huami makes decent fitness watches and bands, and I’ve had the opportunity to use and review quite a few of them. I was rather impressed by the $70 Amazfit Bip S for all the features it packed into that affordable price point.

The Amazfit Stratos 3 is a much more expensive device, coming in at $199. With numerous sports modes, an advertised two-week battery life, built-in GPS, heart rate monitoring, and more, you would think you’re getting a great bargain for the price. In fact, when I reported about its launch in India, I thought the Amazfit Stratos 3 could give the likes of Fitbit a run for its money. How wrong I was.

What is the Amazfit Stratos 3? 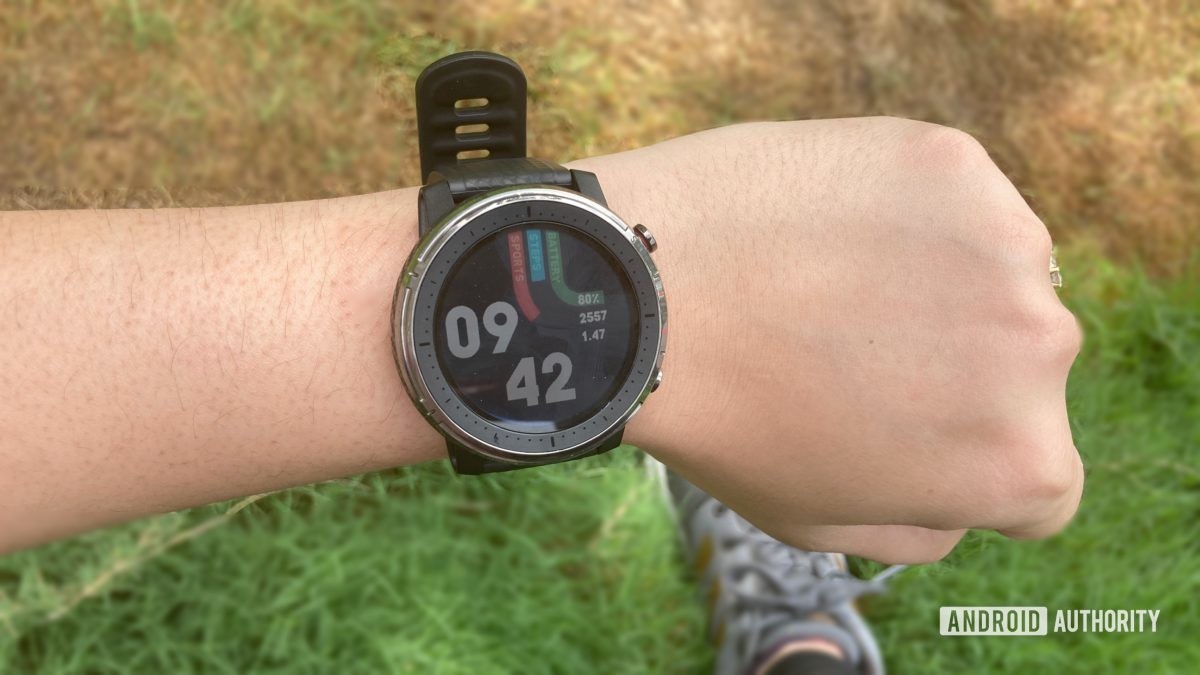 The Amazfit Stratos 3 is a fitness watch. Is it a good one? We’ll get to that later.

The Stratos 3 has a 1.34-inch circular color display surrounded by a ceramic and stainless steel dial. The bottom is made of plastic. It weighs about 40g and has 22mm-wide silicon straps with a Tang buckle.

The Stratos 3 doesn’t give you the ability to download third-party apps or make and receive calls/texts, so it’s not your traditional smartwatch in that sense. But it does provide notification alerts for calls, texts, social media apps, and more. All Amazfit fitness watches we’ve reviewed have this in common.

The list of activities that the Amazfit Stratos 3 can track is super long.

You get everything from a heart rate monitor to built-in GPS, built-in Wi-Fi, 5ATM water resistance, as well as 2GB of internal storage for music. The watch has a 300mAh battery and Amazfit advertises up to 14 days of battery life with its ultra-endurance Mode.

The list of activities that the Amazfit Stratos 3 can track is super long. It has the ability to give you workout stats for 80 different sports, including the most common ones like running, walking, cycling, swimming, treadmill, yoga, and freestyle.

You can select which sport you want to track and start a routine for it from the watch. You won’t actually find all 80 sports modes in the activities list within the watch. The watch will, however, allow you to add more sports modes to your list should you wish to use them. 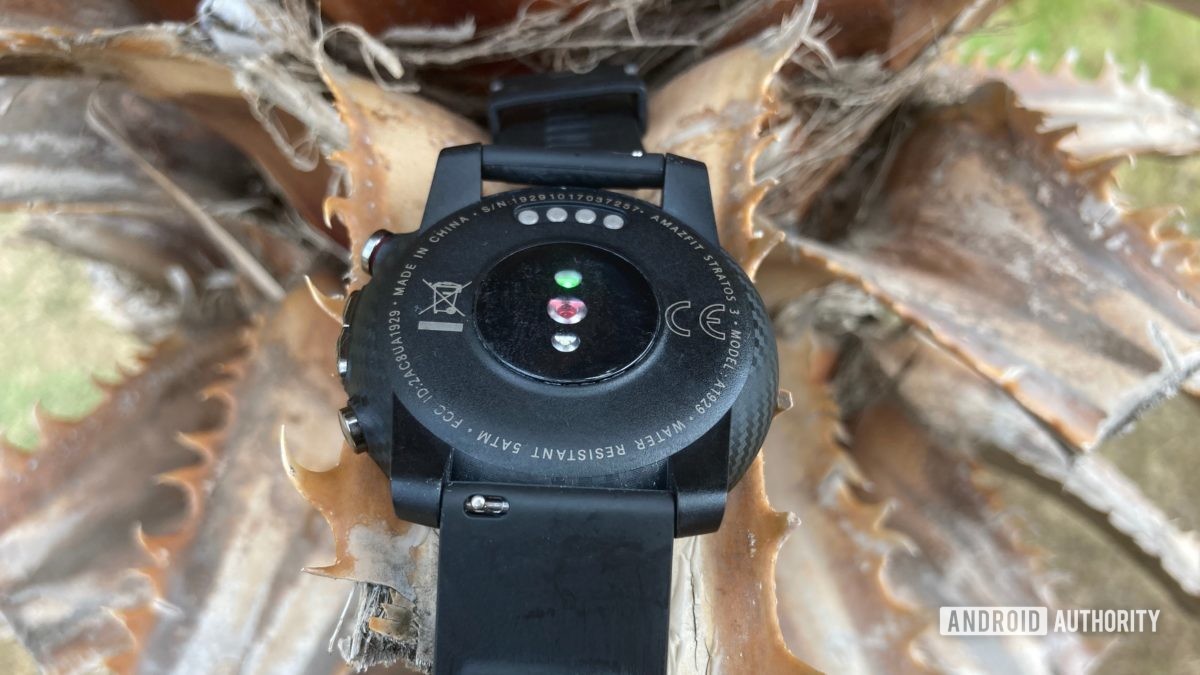 In its own ecosystem, the Stratos 3 is the most expensive smartwatch Amazfit has to offer. The Amazfit GTS comes in at $150 and the Amazfit GTR costs $139. All three watches have similar core features, but vary in the type of sensors used and the tracking modes they offer.

Related: The best fitness trackers you can buy 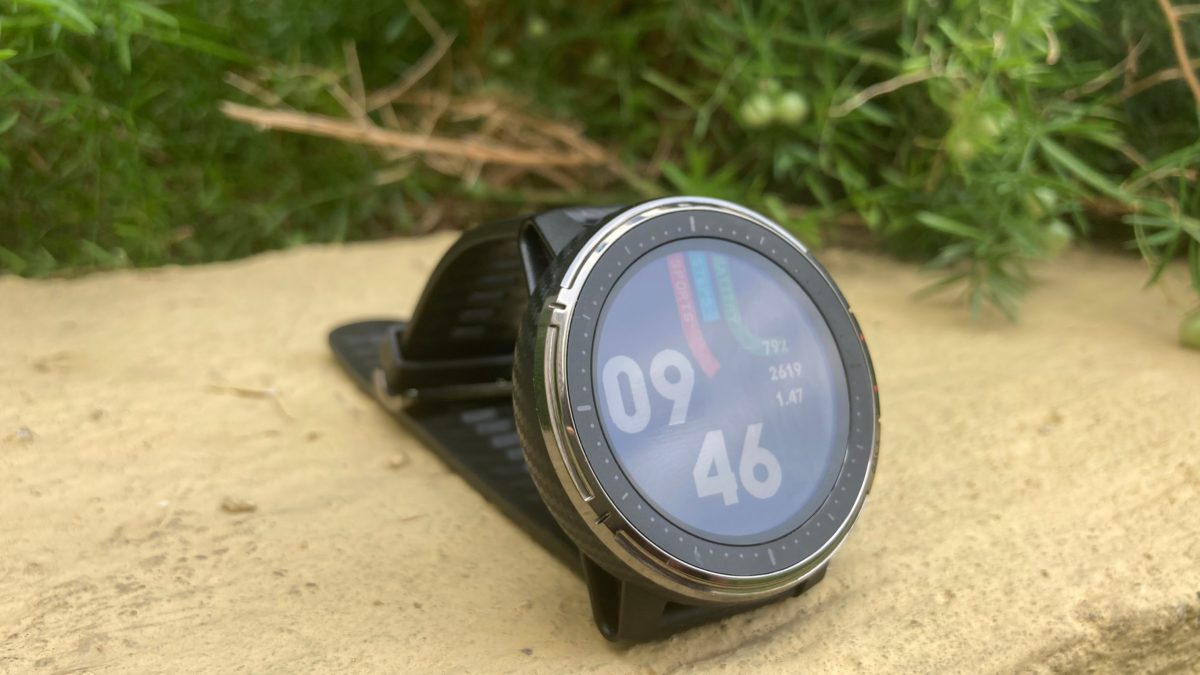 The Amazfit Stratos 3 looks like a pretty solid smartwatch when you first lay eyes on it. It’s got a round dial and I was happy to use an Amazfit watch that doesn’t remind me of the Apple Watch design.

The chrome ring surrounding the dial doesn’t rotate or do any tricks, but adds to the aesthetic appeal of the watch. It also has markings for the buttons placed on the right edge. The base of the watch — the part that rests on your wrist — is quite thick, giving the Stratos 3 a sporty look. This might put off some buyers who are looking for a sleek design. The Stratos 3 is meant for sports enthusiasts; there are many options in the market if you want a good-looking daily wear smartwatch.

They say looks aren’t everything and we found that to be a fair assessment of the Amazfit Stratos 3. While it might look attractive, it’s uncomfortable to wear, particularly when exercising. The cheap plastic bottom and silicon straps of the watch tended to get way too sweaty.

I expect $200 to mean high-quality materials.

In fact, the watch gave me a nasty sweat rash on my wrist the first time I wore it for an extended period. I expect $200 to mean high-quality materials. The rash surprised me because I didn’t have the same issue with Amazfit’s cheaper watches.

Even the TFT display of the Stratos 3 was not very pleasant to use. The touchscreen was too slow to register input and it has a bluish tint to it, which makes the overall appearance dull. Sunlight visibility was also not up to the mark. The Stratos 3’s display is surprisingly not as vibrant as those of other Amazfit smartwatches.

Like most smartwatches, there’s a raise-to-wake feature on the Stratos 3 as well, but it worked inconsistently.

Pairing an Amazfit watch with the company’s Android or iOS app is never an easy process, and it was the same story with the Stratos 3. The fitness watch needed an update when I first turned it on. A plus point of the Stratos 3 is that it can connect to Wi-Fi on its own to pull updates and doesn’t need to rely on a smartphone. However, when I tried setting up the Wi-Fi it failed to connect the first few times.

After several tries, I finally managed to get the Stratos 3 up and running, fully connected to Wi-Fi and the smartphone app. Applying the first update took what seemed like a decade, but it was actually about 20-25 minutes. By the time I could start using the watch and exploring its features, almost an hour had passed. While it might take that long to set up other smartwatches too — the Apple Watch also takes about 30 minutes — the sheer number of errors I came across during the setup process was frustrating, to say the least. 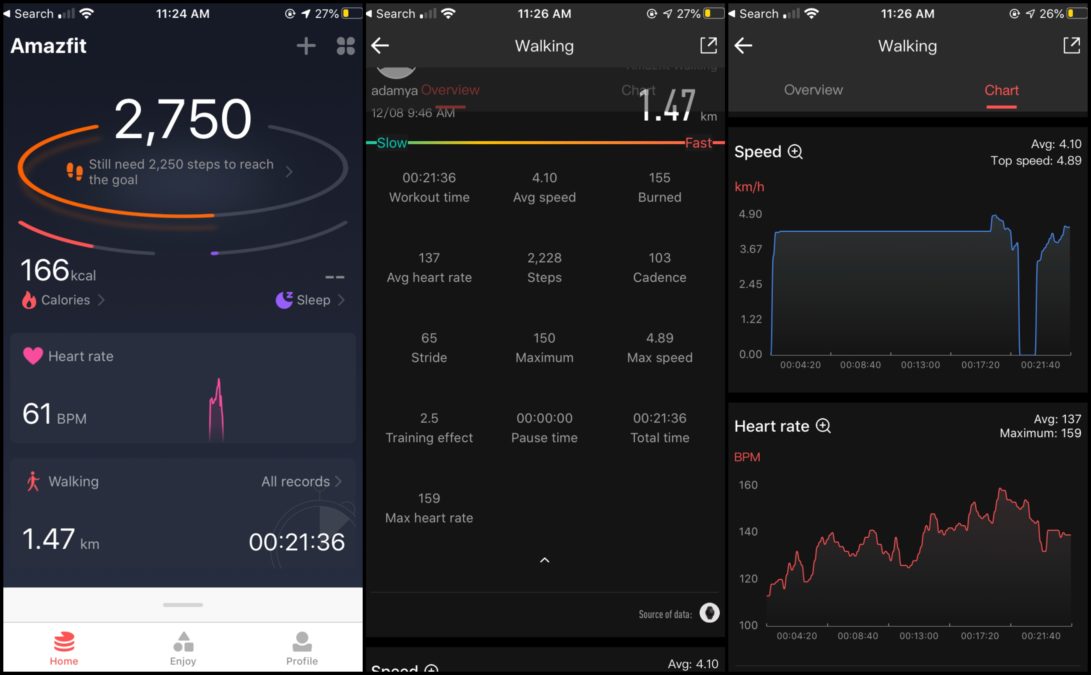 The most basic thing you can track with a fitness watch is the steps you take throughout the day. I am sad to report that the step tracking on the Amazfit Stratos 3 is unreliable.

There were several times it simply refused to account for 50-60 steps taken while strolling around at home. I would walk the length of my living room, sit down and look at the watch, and find the step count unchanged. It’s not a case of steps registering late or something, the watch simply fails to take short walks or strolls into account sometimes. While many smartwatches will miss a few steps here and there, the Apple Watch 4 I am using simultaneously doesn’t show such discrepancies. It might miss 5-6 steps but not 50-60.

Other times, when I used the Stratos 3 for tracking activities like walking and running, the step tracking was satisfactory. On a 1.5km walk around the block, the Amazfit Stratos 3 registered 2,469 steps. In comparison, my Apple Watch Series 4 counted 2,479 steps. I trust the Apple Watch’s tracking more, but a difference of 10 steps isn’t anything to complain about. 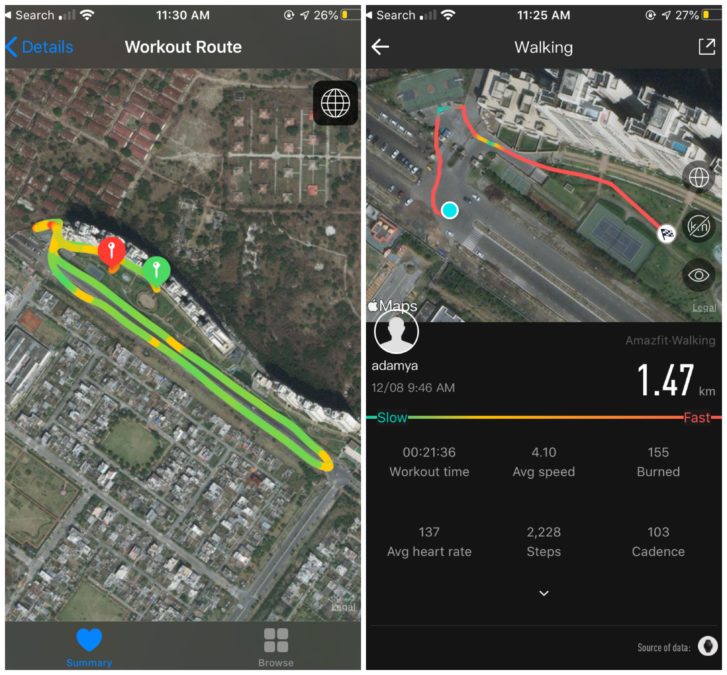 GPS tracking is where things took a turn for the worse. During walks and runs, the GPS on the Stratos 3 often failed to get a lock. In fact, one time, the GPS only managed to connect when I had almost finished my walk (see image above).

Even when it did work, it wasn’t very accurate. Take a look at what the GPS recorded on the Amazfit Stratos 3 and the Apple Watch 4 during the same workout in the image below. Notice how the GPS on the Amazfit shows me walking in front of the basketball court while I was actually behind it and then inside it, as recorded accurately by the Apple Watch. 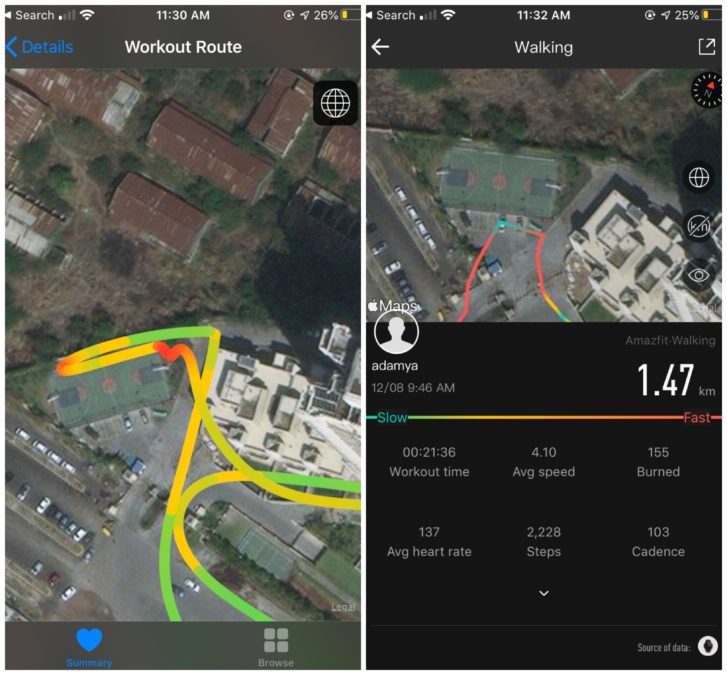 Other tracking modes, such as sleep tracking, worked just fine on the Amazfit Stratos 3 review unit. The only problem I had was that the sleep data did not sync with the app. I am confident it’s a bug. Why? Before I received the latest update, no activity data synced with the app for almost 20 days (more on that in the section below).

App connectivity, once again, was a frustrating experience. As I mentioned, for several weeks I could not use the app at all because a software bug prevented any data from syncing with my phone. The update to firmware version 4.2.7.0 resolved the issue. Thankfully, I could view most of my stats on the watch itself during that time.

Still, it’s a big problem when a new smartwatch suffers such catastrophic issues in its first month. Having access to an app to view your health data is one of the most basic requirements of the smartwatch experience. Sadly, the Stratos 3 deprived me of that for several weeks. Even now, I can’t view sleep tracking stats on the app. 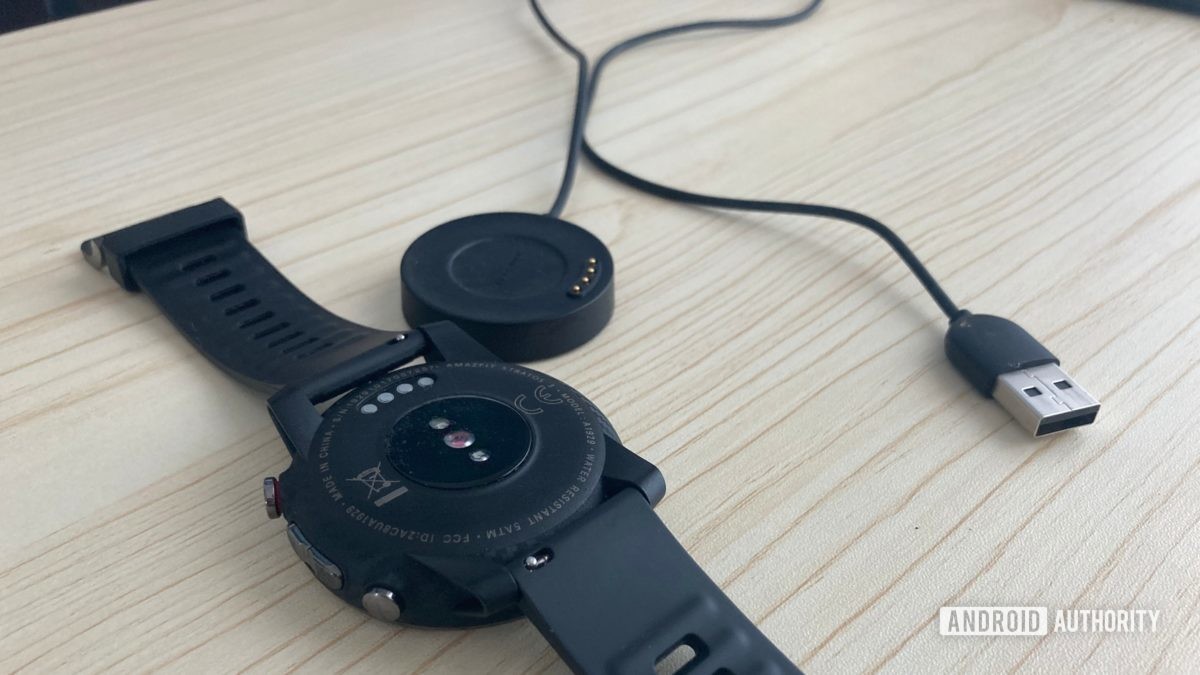 Most Amazfit fitness watches have one thing going for them: battery life. They always deliver the advertised battery life and the Stratos 3 is no different. It promises to run for seven days on a full charge and it gave me exactly seven days with heart rate monitoring and notifications turned on, 30 minutes of walking with GPS every day, and a decent display brightness level.

I also tried the Ultra-endurance mode on the watch and, sure enough, I got the promised two-week battery life. In fact, the actual on-time I got was 15 days. The only downside is that the display resolution drops when you switch to this mode. Some UI elements are also removed so the display has less stuff to render, thereby increasing power efficiency. 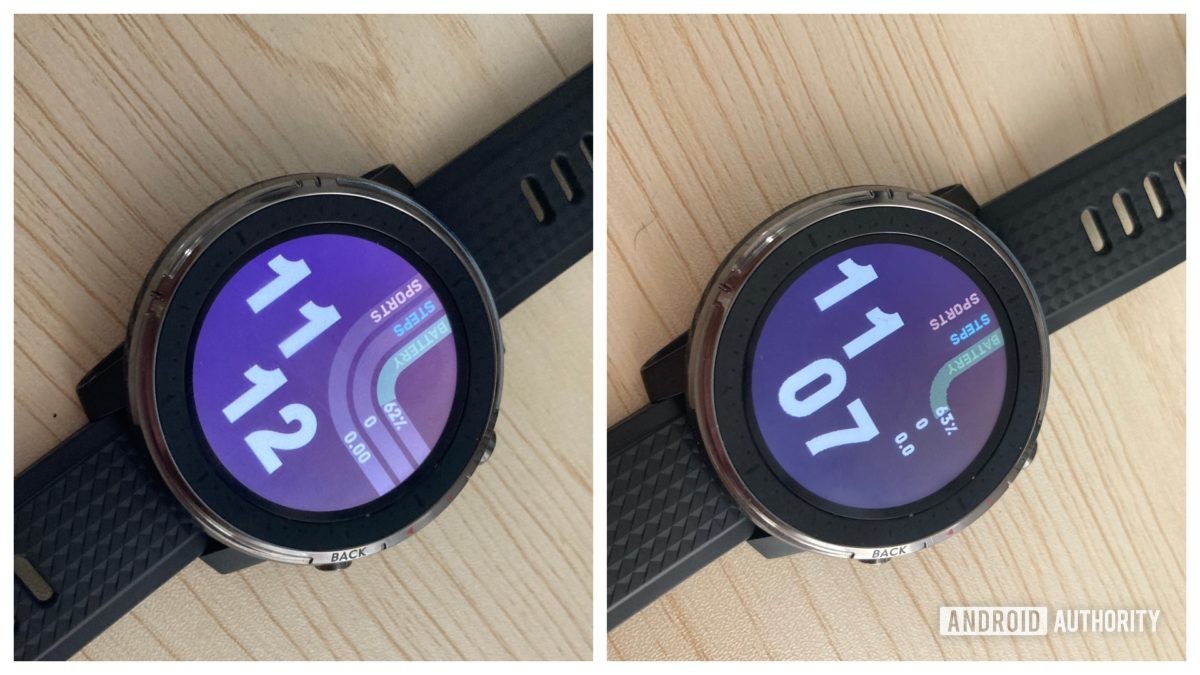 You will immediately notice the difference in how the default clock face looks after you switch to the battery-saving mode (see comparative images above). You also can’t connect the watch to Wi-Fi or get access to more than 12 sports modes during this time. You can, however, continue to use GPS, get notifications, and do all the other basic stuff with the watch.

The Stratos 3 charges using a circular magnetic pogo pin charger that sticks to the base of the watch. In my testing, the watch reached 30% charge in 30 minutes. So if you happen to run out of battery just when you’re about to leave for your workout, you can strap it into the charger, wait 15-20 minutes and leave home with about 15%-20% battery which is good enough to record a few workout sessions. A full charge takes two hours. 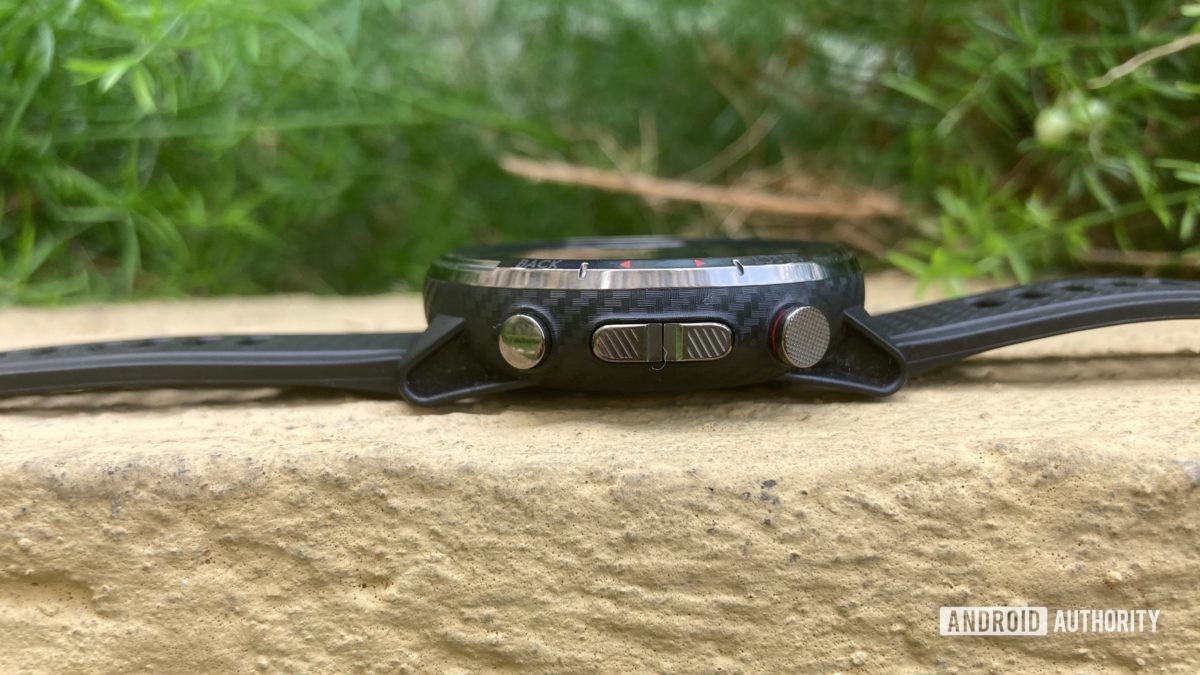 Basic things like app connectivity were unreliable. The build quality is nothing to write home about. The display is dull and uninviting. GPS takes a long time to lock and wasn’t very accurate. The behavior of the watch, in general, is erratic and you never know when a feature will just stop working. I would instead go for the $70 Amazfit Bip S, which offers a far superior experience.

You’re better off skipping the Stratos 3 altogether. It’s not worth your $200.

If you’re looking beyond the Amazfit ecosystem, consider getting the Fitbit Charge 4. In our review of the fitness tracker, we noted that it’s the best one you can get. It offers great battery life, built-in GPS, accurate tracking, and Fitbit Pay at $50 less than what you’ll pay for the Amazfit Stratos 3.