Home How to All Fortnite week 9 challenges, and how to complete them
How to

All Fortnite week 9 challenges, and how to complete them 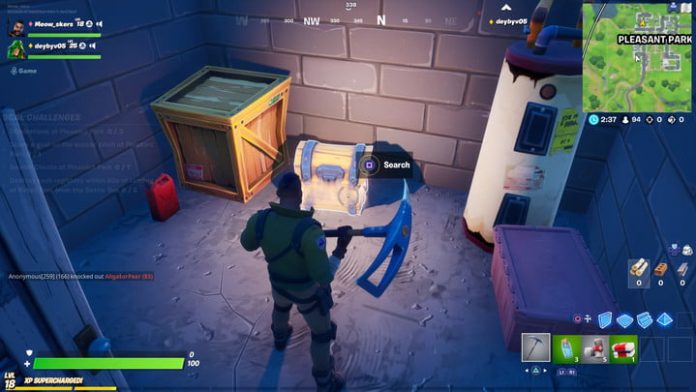 Fortnite’s season 3 week 9 challenges are ready to go and, for the most part, they’re straightforward to complete. As usual, the game will send you across the map to collect items, rack up kills, and more. While some challenges may not give you much trouble at all, others are more complicated. In this guide, we’ll walk you through completing all seven challenges, along with tips and tricks to finish them faster and with ease.

Here’s how to finish all of Fortnite’s season 3 week 9 challenges.

While this challenge isn’t difficult to understand, actually completing it in practice can be a pain, simply due to it forcing you to go to a high-traffic area. To complete this one, you need to open seven chests in the Pleasant Park area, which is located to the north of The Authority. The nice thing is that there are plenty of houses to raid, so you’ll probably find at least one or two if you land there right away.

If you’re having trouble staying alive in this area, or aren’t able to find any unopened chests, we recommend you coordinate with a team so you don’t have to go alone. Your teammates can watch your back so you can get to Pleasant Park right away — giving you a much higher chance of survival and the ability to find unopened chests. You only get credit for the chests you open, but you are able to open the same chest across multiple games.

In the image above, you can see the location of a well-hidden chest, found in the basement of a house on the southwestern portion of Pleasant Park. You can make a beeline to this location, run inside, and head downstairs to find it. It’s also a good idea to plan your visit to Pleasant Park based on the bus’s path. You might have an easier time opening chests if the bus’s path is nowhere near this location — thus making it less busy than you’d expect. However, if you’re even a moderately experienced player, you should be able to get this challenge completed in just a couple of games, depending on whether you have company (from teammates or enemies).

The great thing about this challenge is that you don’t have to eliminate real players for it to count. By taking out Henchmen, you’ll get credit for eliminations at The Fortilla, making things much easier. You’ll find The Fortilla at the southwestern point of the map, west of Rickety Rig. Since it’s usually not a busy area, you’ll almost certainly have to take out Henchmen instead. There are plenty of weapons and items nearby, so you shouldn’t run into too many issues with this one — and you can easily find three to take out in one game.

Do note that you have to completely eliminate the Henchmen for it to count, meaning you can’t simply down them. You’ll need to secure the kill after they’re downed. Any Henchmen kills will stack with the other challenges for this week, including eliminating seven and 70 Henchmen. If you aren’t confident in your skills, we recommend skipping this area if you see a bunch of real players preparing to land at The Fortilla.

Gas Up a Vehicle at Catty Corner

To finish this challenge, you’ll need to gas up any vehicle while at Catty Corner (located on the southeastern part of the map). There are a couple of ways to go about doing this, so pick one based on your playstyle. As always, survey the area and make sure there are no other players nearby who could distract from the challenge. In the main hub of Catty Corner, you’ll see a gas station packed to the brim with Henchmen. You can take them out (which is a good plan since you need Henchmen kills for the other challenges), but if you’re having trouble doing so, there is an easier way.

The easiest way is to visit the telephone booth across the street from the gas station in Catty Corner to wear a disguise. This will prevent the Henchmen from shooting at you, making it easy to simply grab the fuel pump and gas up. This method is the safest when compared to others.

Alternatively, you can find a gas canister — we found one by the western side of the bridge that connects Misty Meadows to Catty Corner, at a small bus station — and fill it up while you’re at Catty Corner. This way is also relatively safe, but it’s more complicated since you have to find a gas can first. If you already have one on hand and aren’t far from Catty Corner, hop in a vehicle, drive it there, and fill it up after you arrive. Just make sure you’re in a safe place, one far from the Henchmen.

The final method is to take out all the Henchmen before filling up. This is the most aggressive means, but it might serve you well on your journey to rack up Henchmen kills for week 9’s challenges.

We go into more detail about this challenge here, but the main thing you need to know is where to find Camp Cod. As shown in the image above, Camp Cod is found on the southeastern island, to the east of Misty Meadows. It’s not labeled on the map, so just look for the large island with the campfires. The goal here is to stoke all three campfires located on the island. When you arrive, you’ll want to head to the center of the island, where you’ll find the first campfire next to a chest. To stoke, you’ll need 30 pieces of wood, which you should have no trouble acquiring from the surrounding trees.

Interact with the campfire to light it, and then quickly interact again to stoke. If you don’t interact quickly enough the second time, the wood will burn and you’ll need 300 more wood to start it again. The second campfire is found on the eastern side of the island, south of the large structure on the right side of Camp Cod. The third and final campfire is found on the easternmost point of the island on a dock (just north of the second campfire).

This is a relatively tranquil location, so you’ll likely have the island to yourself even if you head here right away. Though, if you’re having trouble, we always recommend bringing a friend, just in case. Keep in mind, you don’t have to stoke the fires in any order; the list above is simply the order we went with.

Much like the previous challenge, the hardest part about this one is finding it on the map, since it isn’t labeled. Hydro 16 is found on the southern portion of the map, north of Misty Meadows. Use the image above for reference. This area contains a dam (hence its name) and has lots of metal objects you can smash. On the southern side of the large structure, you’ll find these transformer-looking things that can be destroyed for around 40 pieces of metal each.

There are three of them all bunched up together on the south side, so once you’ve destroyed them, run around the area to finish it up. There’s at least one other transformer across the street from the aforementioned three, which will put you close to 200. From there, smash the fences, street lights, and pretty much anything else that isn’t made of wood or brick and you’ll get 200 in no time. If you head to the roof of the building, you’ll find a handful of metal objects like vents and AC units.

From what we experienced, this area isn’t too terribly busy. We did come across one person, but they were on their way out of the area, leaving it open to complete the challenge. If you do come across someone who has collected most of the metal in this area, it’s still recommended to grab what you can since the challenge can be completed cumulatively, across multiple games.

The final two challenges are for eliminating Henchmen and/or Marauders, and there are a few key points on the map that feature plenty of them. If you’ve been following along, you might already have the easier of the two completed, given it requires you to take out only seven Henchmen. They’re located in The Authority, The Fortilla, and Catty Corner and spawn in packs of around five. The Fortilla is the safest area to farm Henchmen kills since it’s so secluded. You’ll probably run into real players if you go to The Authority or Catty Corner, depending on the trajectory of the bus at the start.

As mentioned before, you need to completely take the Henchmen out after they’re downed, so make sure you secure the kill for it to count. It might take you two rounds to get seven kills if you aren’t able to visit at least two of their spawn points. If you really want to get it finished quickly, head to The Fortilla, take out all the Henchmen you see, and then use a vehicle to get to Catty Corner to take out the rest at the gas station (mentioned in the gas challenge above).

This challenge is the same as the last, only the number of Henchmen required to complete it is tenfold. It’ll likely take you an hour or so to finish taking out 70 of them, but to speed things up, we recommend you fly around in a chopper to hit all three of the aforementioned areas (The Authority, The Fortilla, and Catty Corner). It’s worth noting that Henchmen/Marauders do randomly spawn throughout the map, so be on the lookout for them running around, typically in packs of four. They’ll shoot at you from the ground while you’re in a helicopter, making them easy to spot.

Despite mentioning “four players,” you can complete this challenge solo; it just might give you a little more trouble since you won’t have anyone to watch your back. Finally, make sure you play matches other than Team Rumble, as they don’t appear in that mode. For us, we averaged around 10ish Henchmen/Marauder kills per game, but you can get more if you’ve got a squad with you to help out.