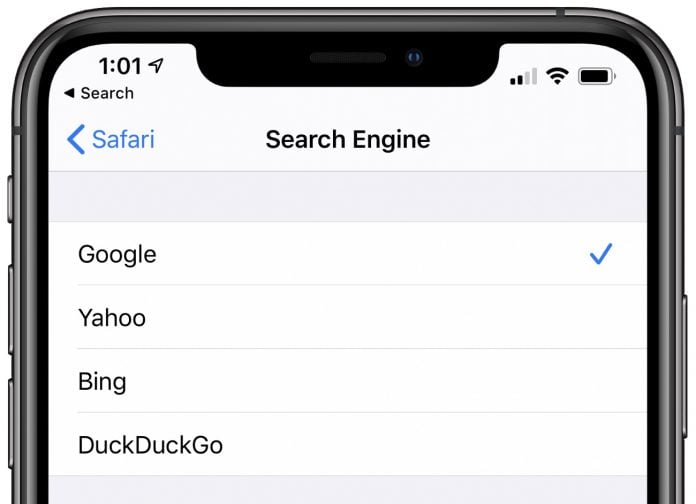 Google pays Apple to be the default search engine on Apple’s Safari web browser on iPhones and Macs, which causes a “significant barrier to entry and expansion” for rivals in the search engine market, said the UK Competition and Markets Authority in a report released today (via Reuters).

The relationship between Apple and Google impacts Microsoft’s Bing, Verizon’s Yahoo, and independent search engine DuckDuckGo. Apple allows users to set these search engines as their default in the Safari settings, a privilege the search engines pay for, but Google Search remains the default on a new device.

Apple received the “substantial majority” of the $1.5 billion (1.2 billion pounds) that Google paid to be the default search engine on various devices in the United Kingdom in 2019, according to the report.

“Given the impact of preinstallations and defaults on mobile devices and Apple’s significant market share, it is our view that Apple’s existing arrangements with Google create a significant barrier to entry and expansion for rivals affecting competition between search engines on mobiles,” the regulators wrote in the report.

UK regulators believe that enforcement authorities should be provided with a range of options to address the arrangement between Apple and Google to provide a more level playing field for other search engines.

Apple could be required to provide “choice screens” that would let users decide which search engine to set as default during device setup, or could be restricted from monetizing default search engine positions, a move that Apple said would be “very costly.”

Apple and Google have never confirmed exactly how much Google pays to be the default search engine on Apple devices in the UK, the United States, and other countries, but it’s rumored to be in the billions.Tags: Google, Safari
This article, “UK Regulators Call Google’s Search Engine Deal With Apple a ‘Significant Barrier’ for Competitors” first appeared on MacRumors.com