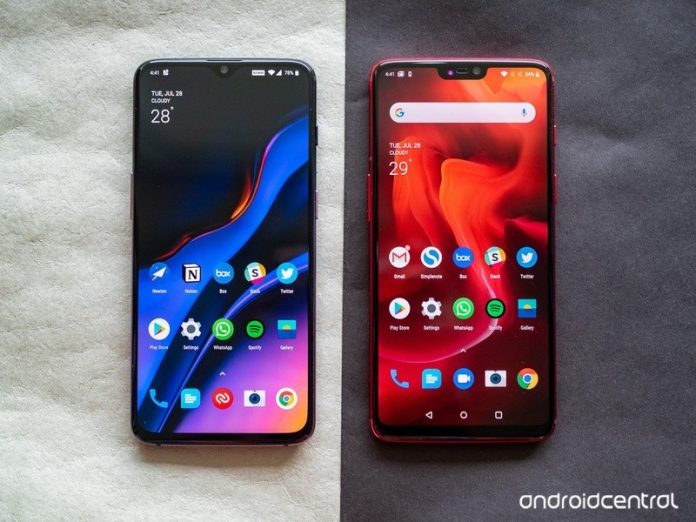 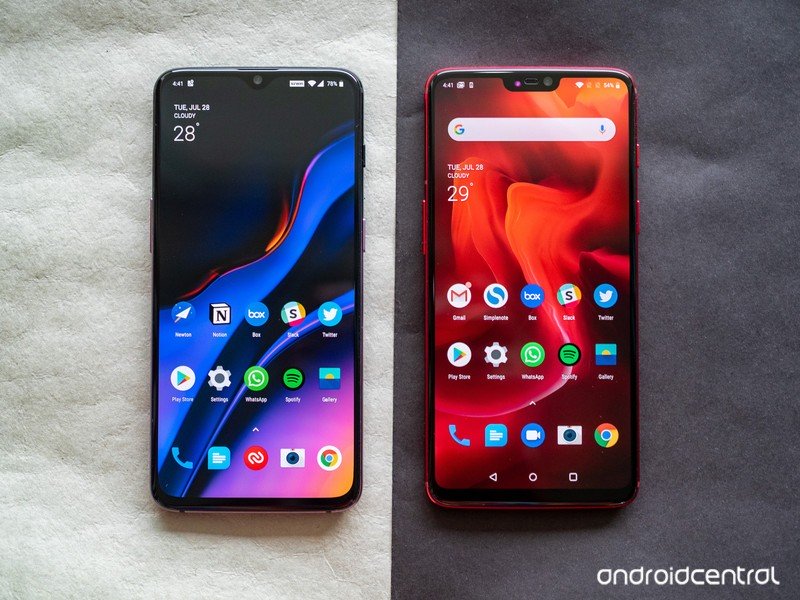 2018 was a big year for OnePlus; the OnePlus 6 and 6T allowed the company to increase its market share in the value flagship segment. The OnePlus 6 was the first OnePlus phone to offer a metal-and-glass design, and the 6T became the first with an in-display fingerprint reader — and the first to ditch the 3.5mm jack.

Both phones offered a more premium design as OnePlus sought to differentiate itself in this area. With the OnePlus 6 retailing for $529 and the 6T launching at $549, OnePlus had to nail the design and feature-set to compete effectively in this segment, and it managed to do just that.

The OnePlus 6T was an important device for OnePlus’ ambitions in the U.S., because it was the first phone the company sold via T-Mobile. The carrier partnership allowed OnePlus to break through the mainstream barrier in the U.S. as the company sought to gain market share in the country.

I switched back to the OnePlus 6 and 6T for a few days to see how either device holds up. Here’s what you need to know about OnePlus’ 2018 phones, and how they fare in 2020. 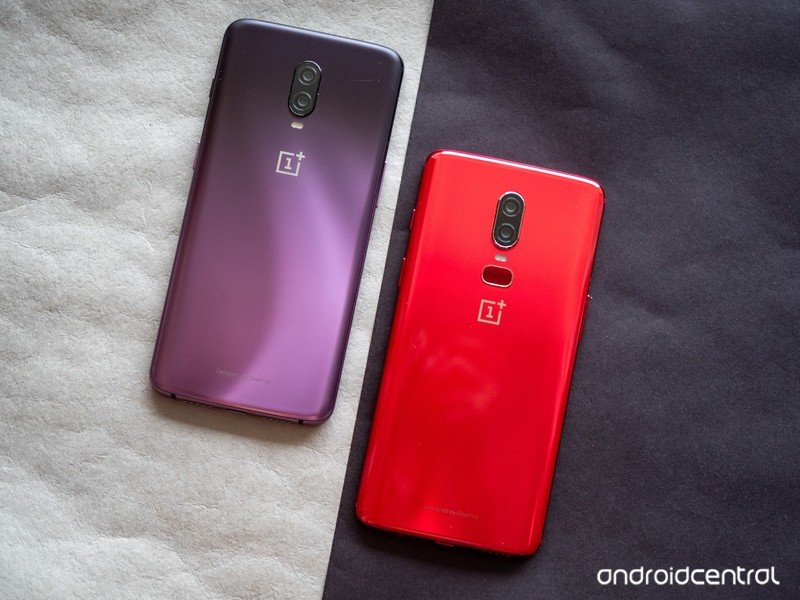 The OnePlus 6 and 6T are based on the third iteration of OnePlus’ design language. The first wave was with the Sandstone finish of the OnePlus One and OnePlus 2, and the second iteration was the metal phase that included the OnePlus 3/3T and 5/5T. With the OnePlus 6 series, OnePlus switched to a glass-and-metal design that has continued into 2020.

The OnePlus 6 and 6T set the stage for OnePlus’ design ambitions.

The design itself has been updated in the last two years as phones got taller and OnePlus started using curved panels, but the aesthetic is largely the same. There’s a familiarity to the design that became evident as I switched back to the OnePlus 6T from the OnePlus 8 Pro. The flowing curves, the positioning of the alert slider above the power button on the right, and the matte coating on the glass back are identical.

That said, the OnePlus 6 and 6T feel different in-hand because of their size. They’re shorter and wider than the OnePlus 8 series, and they serve as a reminder as to just how tall phones have gotten over the last two years. It just feels more comfortable to use the OnePlus 6 and 6T, as there’s no awkwardness with a curved display or issues with adjusting your grip to access a tile from the notification pane.

The OnePlus 6 stood out for the wrong reasons when it launched because of the wide cutout that housed the camera module and the earpiece. Most phones released in the first half of 2018 had this notch, and it defined that generation of smartphones. By contrast, the hole-punch cutout that’s ubiquitous these days feels much more elegant.

Going back to the OnePlus 6 made me realize how much I miss the physical fingerprint sensor.

The OnePlus 6 also had the distinction of being the first OnePlus phone with a vertically-arrayed camera housing at the back. With even budget phones these days offering quad cameras at the back, the dual sensors on the back of the OnePlus 6 and 6T feel almost quaint.

On that note, it was nice to be reacquainted with the fingerprint sensor at the back of the OnePlus 6. As much as I like a seamless design and enjoy the novelty of using an in-screen fingerprint module, it’s just easier to use a physical capacitive sensor to unlock the phone. Oh, and the OnePlus 6 has the distinction of being the last OnePlus phone with a 3.5mm jack. I don’t miss the analog port anymore, but like the physical fingerprint sensor the 3.5mm jack feels like another relic of a bygone world. 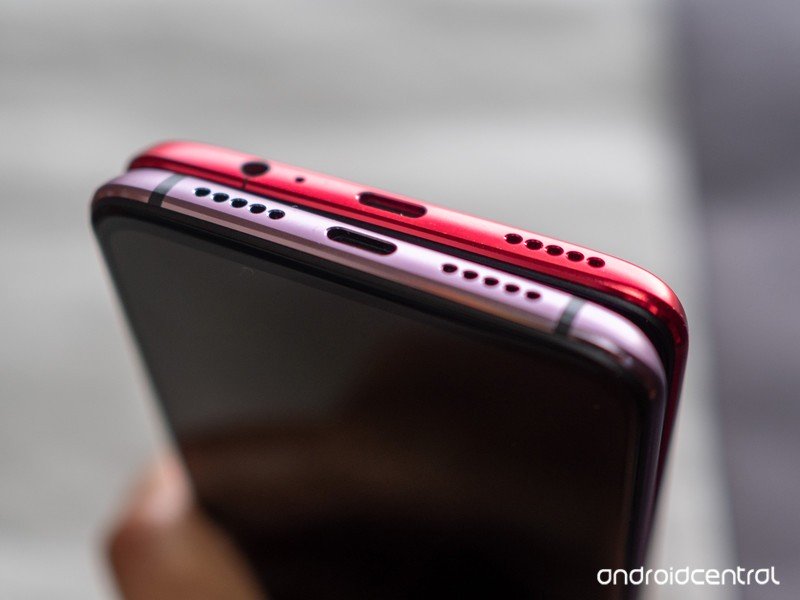 Phone manufacturers collectively decided to get rid of the 3.5mm jack to push their Bluetooth products that netted them better margins, and we acquiesced. The result is that instead of plugging a pair of headphones into a phone and just playing music, we now constantly fiddle around with Bluetooth pairing settings and hope that things work out the first time around.

What the OnePlus 6 ultimately reveals is the tactility that’s missing on phones these days. We used to press a physical sensor to unlock our phones and plug headphones into the 3.5mm jack to play audio. Now we rely on an optical sensor that’s embedded underneath the glass, and tap a few buttons to pair headphones. Technology has come a long way in the last two years, but in the name of progress, we ended up with phones that feel more sterile than ever.

But I digress; let’s get back to the subject at hand. While the OnePlus 6 was notable for being the last phone from the manufacturer to offer a 3.5mm jack and physical fingerprint sensor, the 6T had a lot going for it too. The waterdrop cutout was easier on the eyes, the in-screen fingerprint sensor was in line with the times, and the seamless design at the back allowed OnePlus to unleash its creativity, which led to the stunning Thunder Purple option. The phone was also the first from OnePlus to offer 128GB of storage as standard. 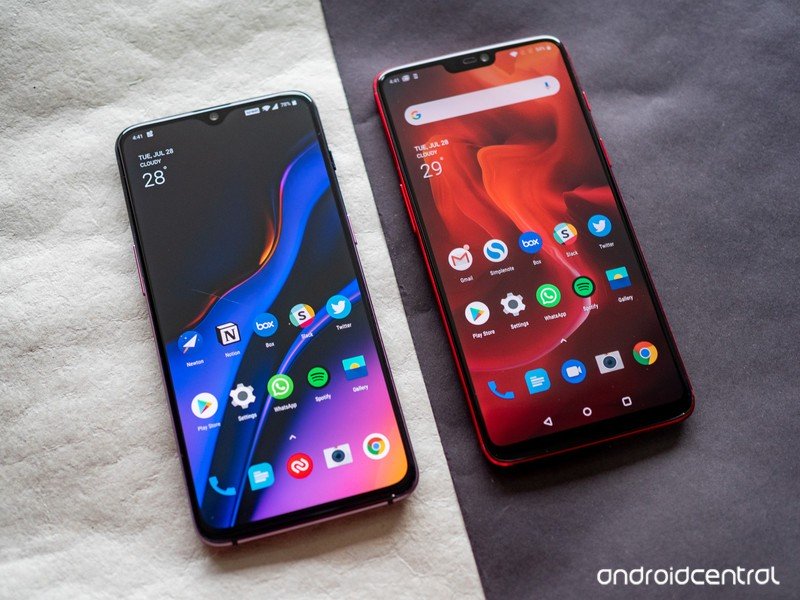 The OnePlus 6 and 6T are just as great to use now as they were back in 2018, and a lot of that has to do with the powerful hardware coupled with software optimizations. Performance is a key tenet of all OnePlus phones, so it’s no wonder that two-year-old phones like the OnePlus 6 hold up well in this regard.

Both the OnePlus 6 and 6T feature the Snapdragon 845 chipset, and it is still going strong. You don’t really see any slowdowns in day-to-day use, and while the experience isn’t as fluid as the OnePlus 8 series, it is evident that neither phone is short on power. OnePlus outfitted both devices with LPDDR4X RAM modules and UFS 2.1 storage modules, and the hardware combined with the optimized user interface with OxygenOS make the OnePlus 6 and 6T a joy to use in 2020.

The display is another facet of the hardware that holds up just fine. The AMOLED panel on the OnePlus 6 and 6T has vibrant colors and a lot of customizability, and you get all the new software features thanks to OxygenOS.

The software side of things is where OnePlus came into its own in the last two years. Both the OnePlus 6 and 6T have received two platform updates, and are on Android 10. The devices are also continuing to get regular security patches, and that’s set to be the case for at least one more year.

The OxygenOS experience is similar to what you get on OnePlus’ latest phones. You get all the exciting features that OxygenOS 10 has to offer, including a system-wide dark mode, Android 10’s navigation gestures, fine-tuned notification controls, and improved permissions. Combine that with all the features OnePlus introduced in the last 12 months — a built-in screen recorder and Zen Mode just to name a few — and the software is what keeps these phones chugging along smoothly in 2020. 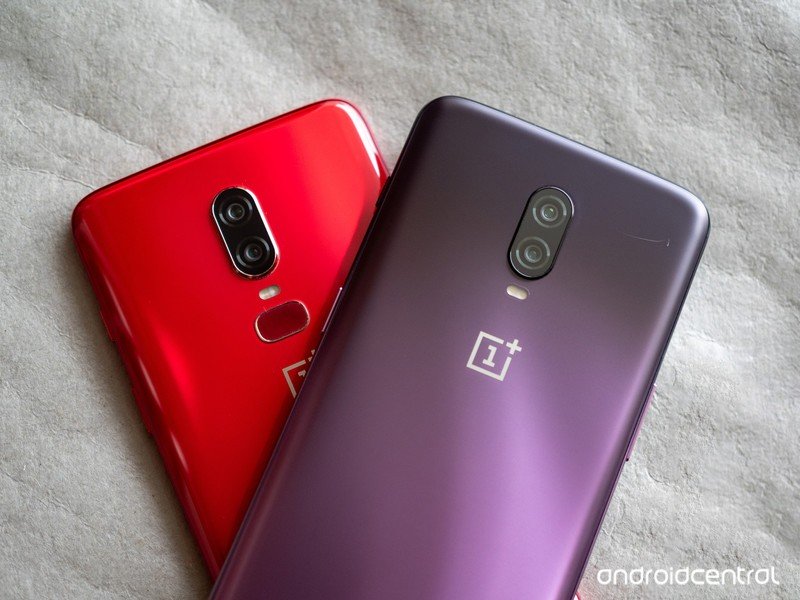 The OnePlus 6 and 6T feature a 16MP main camera and a 20MP secondary sensor at the back, and a 16MP shooter up front. The one thing that was immediately evident when using these phones is how unremarkable the cameras are in 2020.

The cameras are starting to show their age now.

These days, $500 phones give you much more versatility in terms of lenses, and the final image quality is also better thanks to higher-res sensors and pixel binning. Having said that, the OnePlus 6 and 6T fare well enough in daylight and well-lit conditions, but they struggle in low-light environments.

Coming from a 120Hz screen on the OnePlus 8 Pro, I observed an infinitesimal delay when launching an app or scrolling through long-form content on the OnePlus 6 and 6T. 90Hz and 120Hz panels have transformed phones in the last 15 months, and you’ll only appreciate just how much of a difference they make once you go back to a standard 60Hz screen.

Then there’s the issue of haptics. OnePlus started adding a decent vibration motor with the OnePlus 7 Pro, so the haptic engine on the OnePlus 6 and 6T is mediocre. 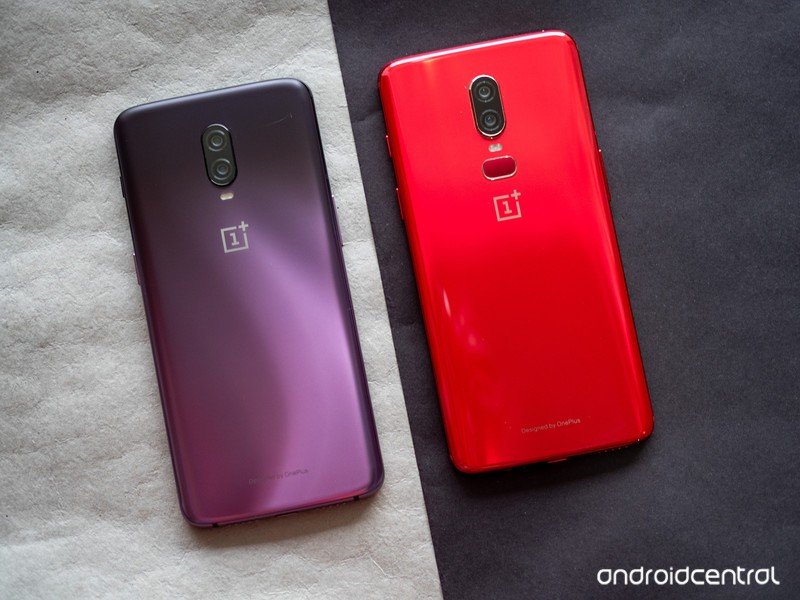 The OnePlus 6 and 6T have aged very well in the last two years. The combination of powerful hardware and optimized UI means they’re reliable in day-to-day use, and they’re continuing to get regular updates.

The design language is still pretty modern, but the phones are starting to show their age with regards to the cameras. And with 90Hz and 120Hz panels breaking into the mainstream with the OnePlus 8 and 8 Pro, there are great options available in the market if you’re looking to upgrade.

The OnePlus 6 and 6T set the tone for OnePlus’ journey into the premium category. The devices allowed the Chinese manufacturer to overtake Samsung in India in the premium category, and nearly two years later, OnePlus still sits at the top of the summit.

All the latest tech 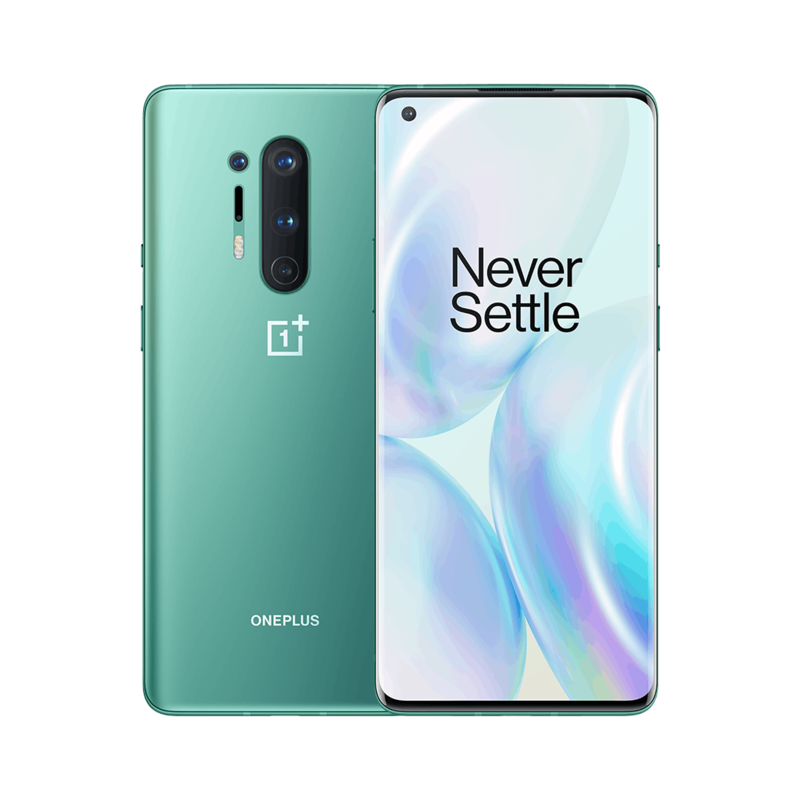 With the latest internal hardware and a stunning new design, the OnePlus 8 Pro has it all. You get a 120Hz AMOLED panel, robust cameras, 30W wired and wireless charging, IP68 water resistance, and a clean software without any bloatware with the promise of timely updates. The OnePlus 8 Pro is the obvious choice if you are looking to switch to a flagship.

Facebook
Twitter
Pinterest
WhatsApp
Previous articleLet the Alexa-enabled iRobot Roomba 960 clean for you at over $100 off
Next articleWill the Oculus Quest 2 have a physical IPD slider?

The next Resident Evil Village update is coming this winter

A couple more months before the next update could be here.What you need to knowResident Evil Village was revealed earlier
Read more

The best cases for the Galaxy Note 20 Ultra needs to balance protection and profile, style and substance, and do
Read more