Home News This could be our first real-world look at the massive Samsung Galaxy...
News 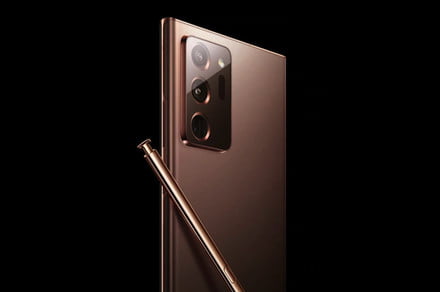 The Galaxy Note 20 likely won’t be out for at least another month or so, but a leaked image could provide our first real look at the upcoming device. The leak comes from YouTuber Jimmy is Promo, and it shows a device with a beautifully large edge-to-edge display and a stunning glossy black finish.

The leaked images themselves show off the volume rocker and power button on the right side of the device, in a similar placement to the new Galaxy S20. Apart from the camera array and some other changes, the tweaks to the overall design seem minor.

Perhaps the biggest change is the new rectangular camera bump, which matches the one on the new Galaxy S20. The camera bump houses a total of four camera sensors, including what appears to be a folded zoom lens. One of the sensors is also likely a time-of-flight sensor.

Under the hood, the Galaxy Note 20 is likely to be one of the best phones of the year. You’ll get a Qualcomm Snapdragon 865 processor, along with at least 8GB of RAM, though possibly more, and at least 256GB of storage. The device will also reportedly offer a 6.7-inch display, with a possible Plus-sized model coming in with a 6.9-inch display. Speaking of the display, Samsung is also expected to start moving away from the curved glass trend, and as a result it’s likely that the Galaxy Note 20 may offer only slightly curved edges.

While the new devices may be announced on August 5, it likely won’t be until later in the month that they’re actually available to purchase, barring any delays due to the ongoing coronavirus pandemic.