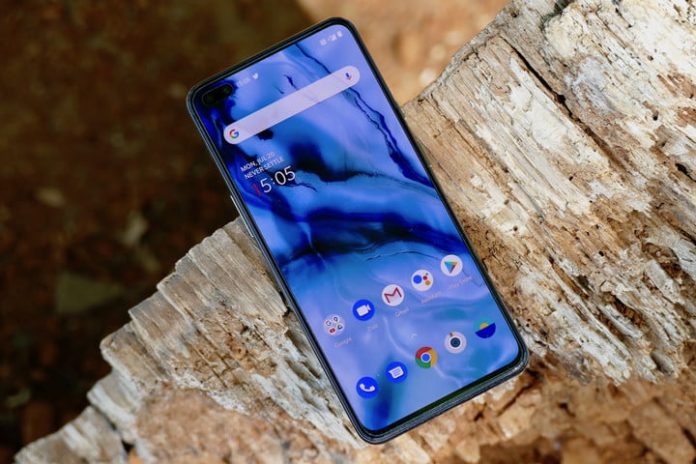 A few years ago, buying a midrange smartphone meant that you were settling for underwhelming specs and performance. Today, the price tier has become a goldmine of exceptional offerings, thanks to companies like OnePlus. Its latest release — the OnePlus Nord — looks to elevate the competition with speed, a quad-camera setup, and 5G connectivity.

However, OnePlus isn’t the only brand hoping to stake its claim in the midrange territory. Apple’s 2020 revamp of the iPhone SE is a no-brainer for those wanting to experience iOS without paying the “Apple tax.” Which device should you buy? We break down the differences and similarities of the two so you can make the perfect choice.

Though released in the same year, the OnePlus Nord looks and feels more like a 2020 smartphone than the iPhone SE. It features a 6.44-inch Fluid AMOLED display with a 90Hz refresh rate and 2,400 x 1,080 pixel resolution for vibrant and sharp visuals. The Nord is a colossus compared to the iPhone SE, but many will find its size more enjoyable, especially for multimedia. Durability takes a hit with the use of a plastic frame instead of metal, though it doesn’t feel cheap and can easily be mistaken as stainless steel. The lack of water- and dust-resistance also raises some questions about how the Nord will hold up in the long run.

If you’ve used the iPhone 6, 7, or 8, then you might find the 2020 iPhone SE very familiar. The handheld is more than just a throwback to when iPhones had home buttons and pocketable figures — it showcases Apple’s latest software and camera technology. It’s smaller than the average Joe, with a 4.7-inch IPS display, but it’s manageable thanks to the large chin and bezels surrounding it. The phone won’t stretch your fingers the way the Nord does, but may also be uncomfortable to handle for those with larger hands.

We’re giving OnePlus Nord the win this round as it offers a premium build that eclipses the outdated design of the iPhone SE.

You won’t be disappointed with the performance of these budget-friendly devices — just don’t set your expectations too high. The Qualcomm Snapdragon 765G chip in the OnePlus Nord can power through most day-to-day apps, but you’ll encounter some stutters and drop frame rates when playing graphic-intensive games. The iPhone SE handles apps and games much more consistently thanks to Apple’s secret weapon, the A13 Bionic chip. You won’t have trouble bouncing from app to app — just don’t expect ones that were used hours ago to still be running in the background.

Packing a 4,115mAh battery, the Nord will comfortably last you a day and some more. A much smaller 1,821mAh cell resides in the iPhone SE, but don’t let the difference fool you. The cell is powering a much more compact device with a lower refresh rate, and, like all iPhones, the standby time is exceptional. As for charging speeds, Warp Charge 30T (30-watt) on the Nord trumps the 18-watt capabilities of the iPhone.

With all-day battery life and faster charging speeds, the OnePlus Nord is better than the iPhone SE in this round. Performance on the iPhone is greater, but only by a small margin.

The OnePlus Nord garnered a lot of interest when it was touted for having a quad-camera setup — one that competed with flagships. If the Google Pixel 3a has taught us anything, it’s that you only need one good camera to take excellent photographs. Even with a 48MP main lens, an 8MP ultra-wide, a 5MP depth sensor, and a 2MP macro lens, we found pictures taken on the Nord to be washed out and underexposed.

On the other hand, the iPhone SE only has a single 12MP lens at the back. At a glance, you don’t expect much from the camera, but you’ll be blown away by how natural and balanced pictures come out. Thanks largely in part to the A13 Bionic Neural Engine, image processing on the iPhone is groundbreaking.

Both devices can shoot 4K at 60 fps, but the iPhone SE’s camera performance is above the OnePlus Nord.

If you have a preference for operating systems, then choosing between the two should be fairly straightforward. The Nord operates on OxygenOS layered over Android 10. It’s one of the cleanest skins out there and packs a slew of customizations. The iPhone SE brings the latest features of iOS 13 to the budget market — that includes dark mode, swipe-typing, and new camera modes, just to name a few. Even with the recycled body, the iPhone SE software experience is snappy and intuitive.

With users upgrading less often, it’s crucial that phones receive timely and consistent updates for software stability. You can expect at least two years of Android updates and three years of security updates on the OnePlus Nord. Those are excellent numbers, especially for a manufacturer not named Google. Even then, the update cycle on iPhones is unmatched. You’ll be able to update to the latest version of iOS as soon as it’s released, even if your iPhone is three or four years old. If you can’t wait, beta programs are available to join at your own risk.

The OnePlus Nord brings standout features that you won’t find even on the most expensive iPhones. A notable one is 5G support. While the next-generation network isn’t fully available, it’s comforting to have the feature for future-proofing. The Nord also brings a smooth, 90Hz refresh rate pane and an in-display fingerprint scanner so you can unlock the phone with a tap. The iPhone SE doesn’t have as much sparkle and glitter but holds up for being one of the best compact smartphones in the market. At a time when smartphones are getting bigger, the iPhone SE fills the void for those with smaller hands. It’s also the only iPhone launched in the past two years with Touch ID.

If you put the two phones side by side, though, there’s no contest. The OnePlus Nord has a better array of special features.

The OnePlus Nord will be available in Europe beginning August 4. You can pick one up for 379 British pounds (about $480) from OnePlus, Amazon, and John Lewis retail stores. An import service is your best bet if you reside in the U.S., though OnePlus is planning to launch a U.S.-based Nord device in the future. The iPhone SE is available to purchase from Apple and all major carriers. Prices start at $399.

The OnePlus Nord is an exceptional device that’s worth considering if you’re in the market for a sub-$500 smartphone. It offers all-day battery life, versatile cameras, a buttery-smooth display, and all the bits and pieces that make for a true OnePlus experience. The phone marks the start of the company’s initiative to produce affordable flagship killers again, and we’re excited to see what’s next.

However, despite the OnePlus winning in more categories, we think the iPhone SE (2020) is still the better phone. Despite the outdated design and single-lens camera, it’s still a phenomenal phone, and one of the best phones you can buy for under $500. The lack of availability seals the deal in the U.S. The OnePlus Nord is the device of choice if you’re wedded to Android, but if you’re stuck between these two phones, then buy the iPhone SE (2020).