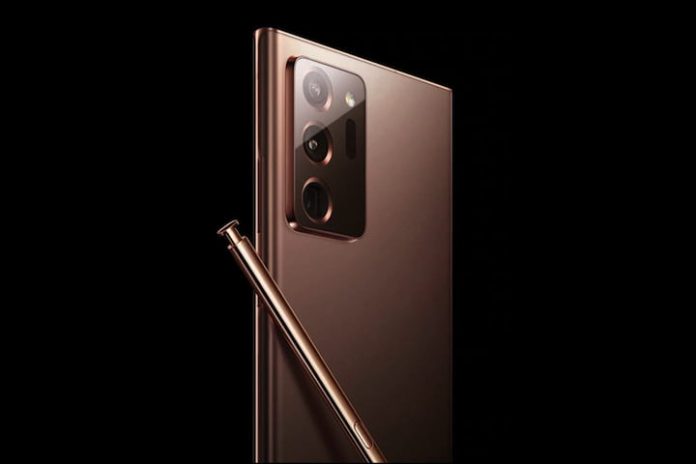 Leaks don’t get more authoritative than when they come from the manufacturer itself, and Samsung has accidentally given us a very good look at the upcoming Galaxy Note 20, after a render of the phone was published on its Ukrainian official website and spotted by Russian YouTube channel Techno Harry. Now removed after the company realized its mistake, it’s our best look at the highly anticipated phone yet, and reveals for the first time one of the colors the phone will come in, called Mystic Bronze.

The render is of the phone’s back, and shows a large camera bump which may end up splitting opinion in its design. The bump shows three sensors running down the side, with a flash unit and another sensor next to them. The look is similar to the one already introduced by Samsung on several A Series phones including the A21 and A71. The dimensions are hard to judge, but it does seem to protrude quite far from the body, although the design itself is neater than that seen on the Galaxy S20 Ultra.

The render shows the Note 20 phone with an S Pen stylus in a contrasting gold color, but its inclusion is no surprise. Samsung has long said the S Pen is central to the Note Series devices, and it has worked hard to make it more relevant and useful to more people, introducing features like a remote shutter control and lock screen note-taking. It will be interesting to see how it evolves with the new Note series.

One other interesting aspect that’s notable in the render is the volume and power button being mounted on the right-hand side, shifting from the left-hand side position Samsung chose for the Galaxy Note 10. Otherwise, the two images don’t tell us anything regarding the technical specification of the new Note 20, or show how the screen will look. The overall shape however, appears to be broadly similar to the Note 10 Plus.

If Samsung follows tradition, the Note 20 series will be revealed during an “Unpacked” event held in August or September. The phone may also be joined by the Galaxy Fold 2 and the Galaxy Watch 3, but nothing is certain yet.