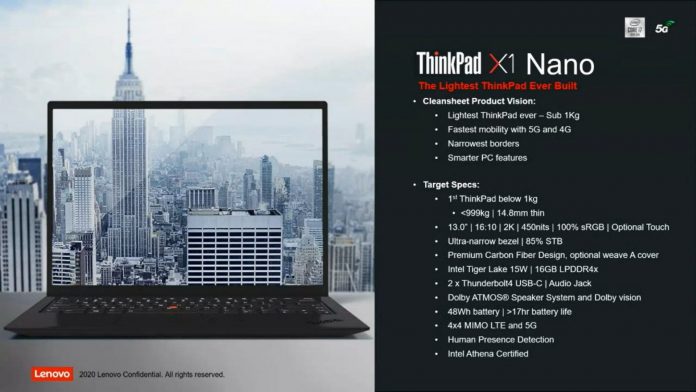 A new ThinkPad X1 Nano laptop could be in the works. Spotted by WalkingCat on Twitter, it features slim bezels and a new 16:10 aspect ratio on the screen, as well as 5G and 4G connectivity.

Though a series of slides sent out by WalkingCat does detail some already released laptops, one of the more interesting reveals is a glimpse of the ThinkPad X1 Nano in what could shape up to be most of its glory. Lenovo is apparently calling the device “the lightest ThinkPad ever built,” highlighting that its weight comes in at sub 1 kilogram — or 2.2 pounds.

More importantly, though, the leaked slide also shows that the X1 Nano sport an “ultra-narrow screen,” and an 85% screen-to-body ratio. Slim on all four sides, the listed specs in the slide suggest the laptop will come in the 16:10 aspect ratio that cuts out the typical bottom chin on the screen. This would be the same as the Dell XPS 13, which has the same, taller screen to allow for more on-screen room for multitasking.

Other target specifications revealed from the slide include that the laptop is apparently 14.8 mm thick, the same as the XPS 13. It also could sport Intel’s next-generation Tiger Lake chipset under the hood, 16GB of RAM, and have a target battery life of up to 17 hours.

Elsewhere, the slide mentions support for 4×4 MIMO LTE and 5G networks. Joining the Lenovo Flex 5G, which is another 5G laptop, it would be a great travel companion for living life without worrying about Wi-Fi.

Of course, the device also appears to support an optional touchscreen, as has been standard on most ThinkPads. It will come outfitted in what Lenovo calls “a premium carbon-fiber design” and “optional weave A cover.” As for connectivity, the slide mentions two Thunderbolt USB-C ports and an audio jack.

It’s not clear when these slides were released and nothing has been confirmed as of yet. As always, this means that the X1 Nano should just be regarded as a rumor. But with Dell fresh off the release of the XPS 13, XPS 15, and XPS 17, it’s not too surprising to see Lenovo refresh its own lineup with similar design features.