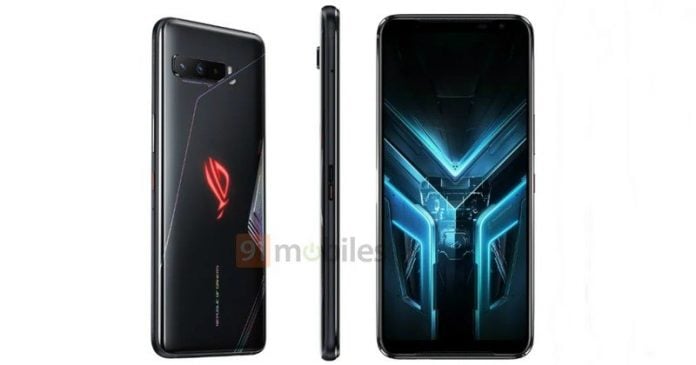 The ROG Phone 3 will come with just a few notable changes on the outside.

The much-awaited successor to the ROG Phone 2 will finally be unveiled next week. As confirmed by ASUS earlier this month, the ROG Phone 3 will be making its global debut at a “Game Changer” virtual event on July 22. Ahead of the event, leaked renders of the flagship gaming phone have now surfaced, reaffirming a largely familiar design.

The renders of the ROG Phone 3 shared by leaker Ishan Agarwal and 91Mobiles show the upcoming gaming phone from all sides. As can be seen in the renders above, the phone will have a Republic of Gamers logo on the back with RGB lighting, just like its predecessor. Unlike its predecessor, however, the ROG Phone 3 will have a triple-camera setup at the rear. The renders also confirm the positioning of the power, volume, and trigger buttons on the right side of the phone. On the left side of the phone will be the SIM card tray and a proprietary port for charging and connecting various accessories.

In terms of hardware, the ASUS ROG Phone 3 is expected to be a beast. It will feature Qualcomm’s new Snapdragon 865 Plus chipset, which delivers 10% higher gaming performance compared to the Snapdragon 865. The flagship 7nm chipset is expected to be paired with up to 16GB of LPDDR5 RAM and 512GB UFS 3.0 storage. ASUS’ upcoming gaming phone is also rumored to have a 6.59-inch AMOLED display with 144Hz refresh rate, a 64MP primary camera, and a massive 6,000mAh battery with 30W fast charging.