Home How to How to watch UFC Fight Night 173 online: Live Stream Figueiredo vs....
How to 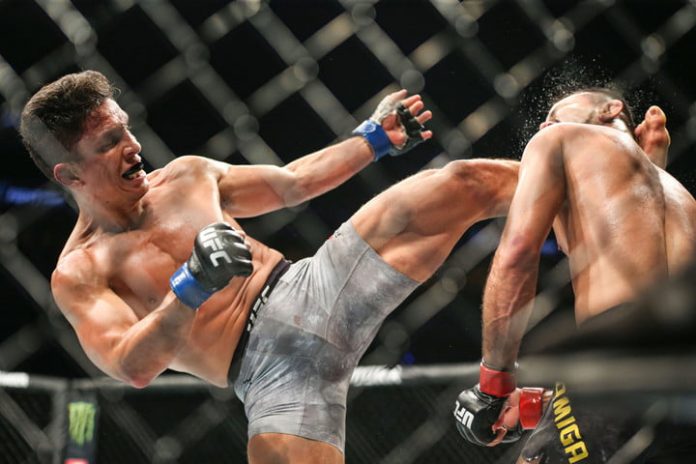 If you’re looking for a way to stream UFC Fight Night: Figueiredo vs. Benavidez 2, then you’ve found the right place. Below, we’ve got all the latest info about UFC Fight Night 173 including fight cards, starting times, and more about the combatants, along with a quick guide on how you can live stream Figueiredo vs. Benavidez 2 with ESPN+ this Saturday.

How to watch UFC Fight Night 173 online in the U.S.

UFC Fight Night 173: Figueiredo vs. Benavidez 2 is not a pay-per-view event, so all you need to watch it online is an ESPN+ subscription. ESPN+ is a premium streaming service that launched in 2018, giving members on-demand access to a myriad of sports content including UFC content such as live fights, weigh-ins, fight analysis, press conferences, and more. And since the UFC and ESPN enjoy a very tight relationship, ESPN+ is the best way to stream UFC Fight Night 173 online and is the only way you can watch pay-per-view events like the upcoming UFC 252. ESPN+ will set you back only $5 per month or an even cheaper $50 per year.

Although it’s not a high-stakes pay-per-view event, UFC Fight Night 173 has some exciting matches featuring top MMA talent. The headliner on the main card is a rematch between Deiveson Figueiredo (18-1) and Joseph Benavidez (28-6), the UFC’s two top-ranked flyweights who faced off earlier in February. At that UFC Fight Night, Figueiredo held onto his rank as the No. 1  UFC flyweight when he defeated the second-ranked Benavidez via a second-round TKO.

The co-main event at UFC Fight Night 173 is a bout between American fighter Kelvin Gastelum and Swedish-Norwegian combatant Jack Hermansson, both seasoned middleweights on the UFC roster who each boast impressive records. However, both men are also walking into the Octagon at UFC Fight Night 173 following defeats: Gastelum, with a record of 16-5, has lost three of his past five fights (including both of his most recent ones), while Hermansson (20-5) suffered a TKO loss in his fight against Jared Cannonier in September in what was the main event for UFC Fight Night 160.

The only thing you need to do to watch UFC Fight Night: Figueiredo vs. Benavidez 2 online this weekend is to sign up for ESPN+, and with the UFC firing on all cylinders again, there’s never been a better time to jump aboard. With ESPN+. you can stream UFC (and a ton of other sports content) to your hearts content right on your computer web browser, mobile device, or other compatible streaming device with the ESPN+ app for just $5 per month or $50 per year; if you want a more complete bundle that includes UFC live streams, however, then this package gets you ESPN+, Hulu, and Disney+ for just $13 (saving you $25%).