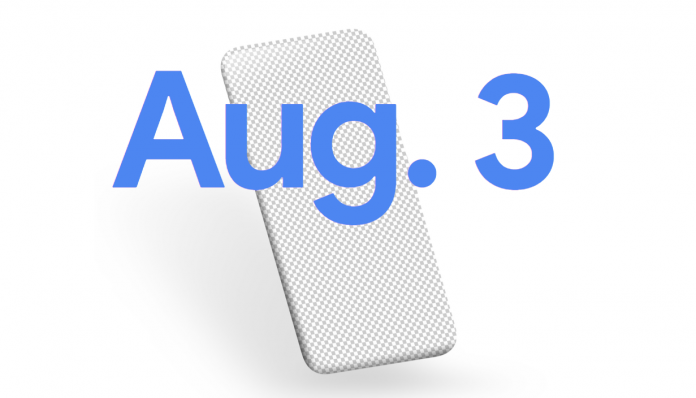 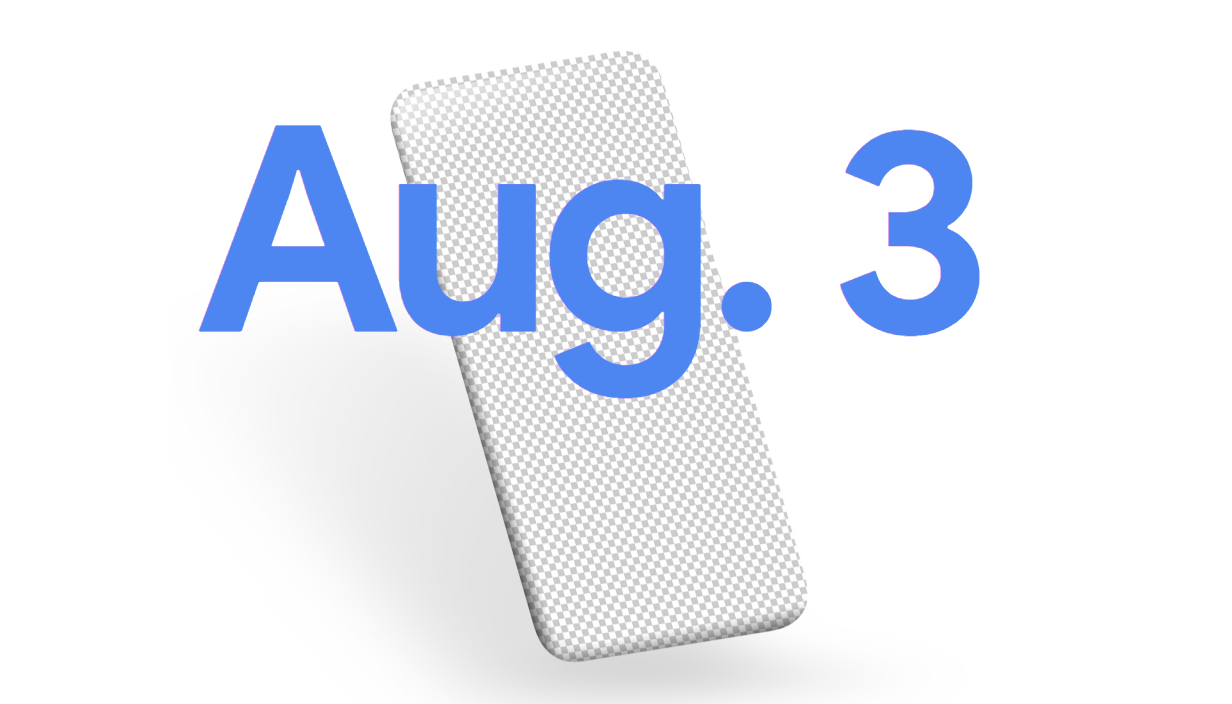 Google’s next phone, the oft-leaked Pixel 4a, is set to arrive in but a few days time. Or at least that’s how it appears.

Google this week updated its “Made by Google” Facebook and Twitter accounts with new images and set up an interesting landing page at its online store. Part placeholder text (lorem ipsum), part fake words, it teases out a few features for the forthcoming device.

Providing an image that looks like a phone wrapped in checkerboard pattern, the seemingly redacted description is actually a puzzle.

Simply tap each square until it matches the Google logo colors (blue, red, yellow, blue, green, red) and it reveals text. Moreover, it reveals an August 3 that displays atop the phone. 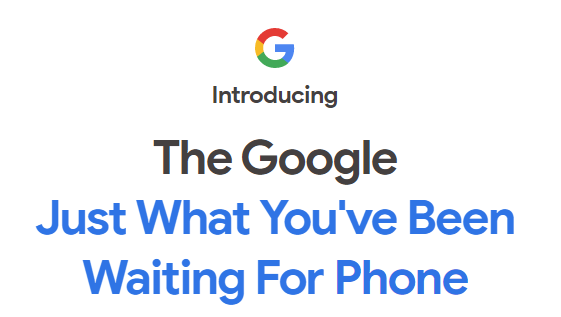 Originally expected in May, the Google Pixel 4a has been the subject of many leaks and rumors. Its features and specifications are all but certain, as is its price tag. With that said, we’ll be quite interested in the phone once it’s made available.

If you dig through the placeholder text, you can suss out some of the details or selling points. In it are references to video chat, low-light capture, bokeh effects, and long-lasting batteries.

Thanks to chatter and leaks over the last few months we have an idea as to what to expect. Specs are reported to include a 5.81-inch display, 6GB RAM, and at least 64GB storage capacity. Additionally, it is alleged to have Google’s Titan M security chip and feature the same video recording capabilities as the Pixel 4.

As far as pricing goes, all signs point to a $399 starting cost for the phone with black, white, and blue shades.

Facebook
Twitter
Pinterest
WhatsApp
Previous articleJust $35 today, these wireless earphones boast six hours playback per charge
Next articleHow to back up (and restore) your Animal Crossing island should the worst happen

Wireless headphones and earbuds are easily some of our favorite mobile-related gadgets. If you’re like us, once you’ve cut the cord, it’s tough to go back to something that’s physically tethered. Bluetooth is the way to go.Plenty of Bluetooth earphones or earbuds still have some degree of a cord; they often need something to connect the left ear to the right ear. Many newer models, though, are able to take advances in Bluetooth technology. Take for, instance, the GSK True Wireless Headphones from 1VoiceNYC.AboutAs our special offer of the day, the 1Voice Bluetooth wireless earbuds are ergonomically designed to sit comfortably in your ear. They’ll stay in place when you go running, jogging, or about your daily commute.FeaturesListen to smooth audio & clear calls w/ cVc 6.0 active noise-cancellationRecharge your headphones on-the-go w/ the 300mAh battery in the charging caseWirelessly listen to your jam for longer hours thanks to Bluetooth 5.0 + EDR connectivityTake calls anywhere w/ the built-in micWhere to BuyYou can purchase the GSK True Wireless Headphones for only $34.99 right now, a savings of some 70% from their normal price. Normally listed around $119, this limited time offer won’t last long.Best SellersEarn Credits!For every $25 you spend in the AG Deals Store you get $1 credit added to your account. And, if you refer the deal via social media or an email that results in a purchase, you’ll earn $10 credit in your account.First Time Buying?If this is your first time buying, you are also eligible for 10% discount! Just be sure to subscribe for email updates.Free StuffNot looking to spend any money today? No worries. You can still visit the AndroidGuys section for freebies and pick something anyhow.
Read more
Reviews

The dog days of summer are upon us and outdoor living is in full swing. For some of us this means taking our TV and movie experience to the patio or driveway for projecting media.The original Nebula Capsule has been a great device for family viewing on my patio over the last few years. I was pumped to be able to give the new Capsule II a shot from the Anker sub-brand over the last few weeks.How does the latest edition match up against the solid performer of the Capsule I? Overall, you’d be hard to say it hasn’t improved in almost every metric.DesignLet’s start with the industrial engineering behind the Nebula Capsule II. The overall size is larger than the previous generation. The original model was literally the size of a soda can. The Capsule II is more the size of a pint glass.This is not a knock on the Capsule II though. It’s still incredibly portable and can be used with any 1/4-inch tripod mount. As long as you have that, you can pretty much set up anywhere with the Capsule II.Specification wise, you will only get 720P HD resolution at 200 Lumens that can be canvased to a max screen of 100 inches. All this is presented under the wrapper of Android TV as the Capsule II operating system.Internally, you need a good engine if you take the Nebula Capsule II on the road. It has a combination of 2GB of RAM, 8GB of internal memory, and a 9,700mAh battery. In addition, you have an 8-watt speaker to power the audio.Expandability is also an option with several inputs in the back of the Capsule II. You can use auxiliary audio via 3.5mm jack, full HDMI, USB 2.0, or USB-C to add additional inputs to your projection experience.Watching ContentSpeaking of experience, the addition of Android TV has made a world of difference between the first two generations of the Capsule II. The full Google Play Store and Chromecast make this a much more polished option for the end-user.The remote contributes to this as well. Having a full D-pad style remote with Google Assistant just makes finding content easier. The remote has a good weight and hand-feel. The buttons offer good feedback on button presses that are better than the first generation as well.All of your favorite apps are available that you’d normally see on Android TV with one glaring absence of Netflix. There are multiple rumors of the why including that Netflix has units produced minimum that the Nebula Capsule II hasn’t reached in volume, but it’s disheartening to not see it on the homepage.Thankfully, there are several options to get the Netflix app installed, but we recommend the official avenue of Nebula Manager offered directly from Anker. This allows you to install the app and walk you through adding it to your home screen.While many will fault the Capsule II for only having 720P resolution, I’ve had zero issues. The screen size is easily adjustable with a crisp output. The projector also has an auto-focus feature that will make getting the setup just right a hassle-free adventure.Battery LifeThe big selling point of the Nebula Capsule II is portability and you can’t have that without endurance. I’m happy to report that I’m consistently getting three hours of playback of the video. I will deduct a point or two that this is down a full hour from the smaller generation one unit. You’d think with a larger footprint, this could have at least stayed flat at four hours.Regardless, three hours gives you some great time to take in content with the family. It may be a little short for longer movies, but you have to go to bed sometime, right?Final ThoughtsI’ve loved my time with the Anker Nebula Capsule II. This projector should be on anyone’s shortlist for outdoor entertainment that can be easily set up and moved when done. Add the mass improvement of Android TV over the blown-up phone interface of the original, you have a new king of small projectors.The one drawback might be the price of $580. However, the quality of this projector combined with its portable design makes it uniquely valuable. You can purchase the Nebula II via Anker’s site directly or head to Amazon if you prefer.
Read more

If you are looking for an affordable way to get a theater-like audio experience the Yamaha YAS-207 soundbar is the one you...
Read more

Apple has purchased payments startup Mobeewave, which created a system that lets shoppers tap a credit card or smartphone on
Read more