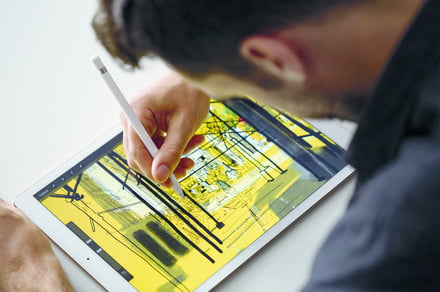 A patent reveals that a future version of the Apple Pencil may be able to select colors from the real world, a feature geared toward illustrators or artists.

The patent application, filed with the U.S. Patent and Trademark Office in November but just published earlier this week, covers a “color sensor” with photodetectors, which will measure the reflected light from objects to determine their colors. The stylus may also come with its own light source to help the sensors detect objects’ colors.

The sensor may be placed at the tip, coupled with a light guide, or at the opposite end of the Apple Pencil, with the feature activated when the stylus is placed in a certain orientation, such as upside down.

The technology will allow Apple Pencil owners to bring the stylus near a real-world object, such as fabric or flowers, which will then be detected by the sensor and placed in a color palette in a drawing program. The color may then be assigned to the program’s functions, such as for lines and text.

The Apple patent, however, does not limit the application of the technology to art. The sensor may also be used to measure colors for the purposes of calibrating displays and printers, making health-related measurements, and identifying colors for paint and cosmetics, among other things.

The patent application does not mean that the feature will surely arrive in an upcoming version of the Apple Pencil, but it does mean that Apple, at the very least, is exploring a color sampling sensor for the stylus. Digital Trends has reached out to Apple to try to get more information on the technology, and we will update this article as soon as we hear back.