HomeHow toFortnite: How to unlock every Aquaman skin
How to

Fortnite: How to unlock every Aquaman skin 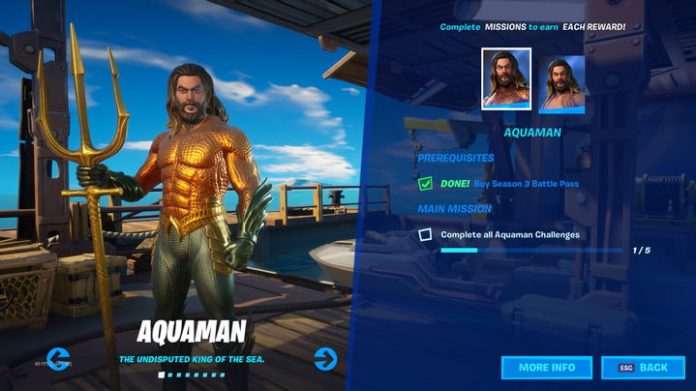 With the arrival of week five in Fortnite‘s season three, players are now able to unlock the highly-anticipated Aquaman skin. There’s also an optional variant available, called the Arthur Curry skin, if you’re up for tackling one additional task. It’s not difficult to acquire either, but there are several steps involved in the process.

Fortnite has been letting players attempt one new Aquaman Challenge each week, so if you haven’t been keeping up with your to-do list, you’ve got a bit of a slog ahead. Here’s everything you need to know about unlocking every Aquaman skin in Fortnite.

Up until week five, it was impossible for anyone to earn the basic Aquaman skin. Every week leading up to the fifth, Fortnite would unlock one new Aquaman Challenge and, with the arrival of week five, players can finally complete the last challenge. In case you haven’t been keeping up, here are all the tasks and their associated rewards:

Most of these are straightforward and easy to accomplish, but the new week-five task might throw some players for a loop. It turns out that the trident you’ll need to collect doesn’t spawn in one specific place. Instead, it can be found at one of three spawn locations in the Coral Cove section of the map. All three are rock formations that jut out from the water’s surface, so keep an eye out for anything shiny at these hotspots.

Complete all five and you’ll be rewarded with the popular skin. Of course, you’ll need to purchase the Battle Pass to gain access to the content, so make sure you’ve got a few V-Bucks in your pocket before setting your eyes on Aquaman.

Once you’ve picked up the basic Aquaman skin, there’s one more challenge you can attempt:

With the Aquaman skin selected, head over to the waterfall at Gorgeous Gorge and dive off the edge. For your death-defying antics, you’ll be rewarded with the muscular Arthur Curry skin variant. As of now, these are the only two Aquaman skins available in the game — although we wouldn’t be surprised to see new ones arrive in Fortnite‘s cosmetic shop at a later date.

Don’t feel like you need to rush through these challenges, as they’ll remain available until the end of season three. Epic Games hasn’t given us an official date yet, but many fans are speculating that it will run until the last few days of August.