Home News Everything we know about Assassin's Creed Valhalla
News 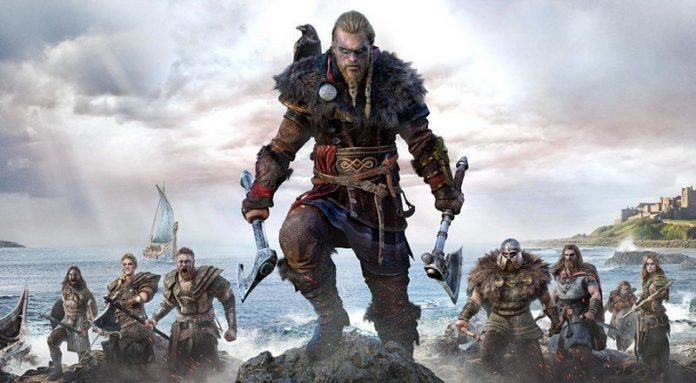 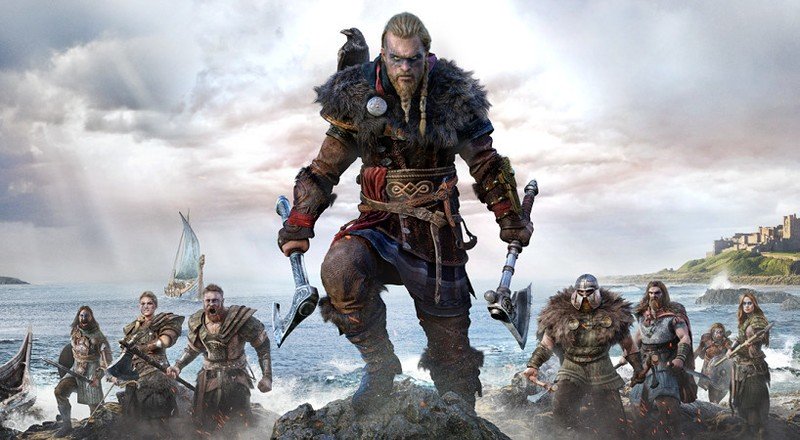 Get ready to raid some villages and conquer new lands.

The next Assassin’s Creed was revealed by Ubisoft through a livestream where graphic designer BossLogic worked some magic to create artwork for the game. As previous rumors suggested, it does take place during the time of Vikings. If the world premiere trailer is anything to go by, it promises a lot of bloody battles. Assassin’s Creed Valhalla is being developed by Ubisoft Montreal, with support from 14 other studios around the world. 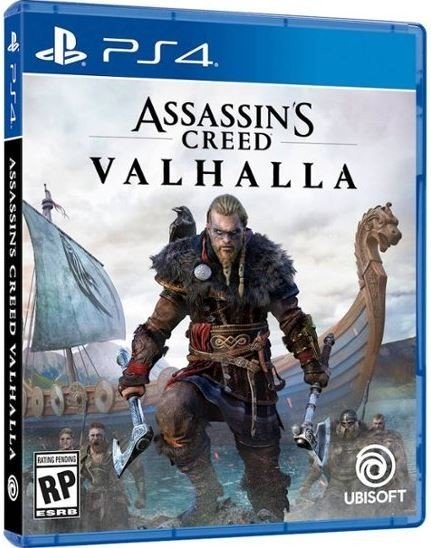 Assassin’s Creed Valhalla takes place during England’s Dark Ages in the 9th century. According to Creative Director Ashraf Ismail, players will visit four major English kingdoms during that time period: Wessex, Northumbria, East Anglia, and Mercia. Specific cities include London, Winchester, and Jórvík (York), along with smaller towns. Norway also plays a major role as role set sale from your homeland after endless wars. Players will be able to go back and forth between both countries.

Though Norway and England make up the core of the map, Ismail says the world still has some surprises in store that Ubisoft isn’t getting into just yet. 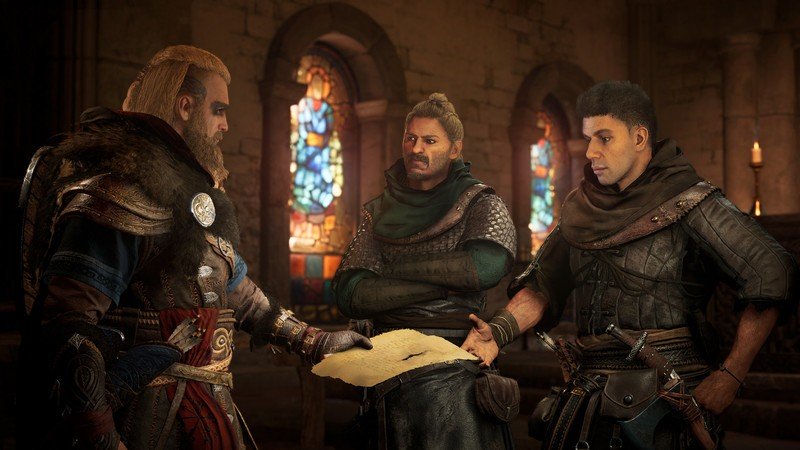 As clan leader, Eivor (male or female) will lead their clan from the war-ravaged Norway to the shores of England and beyond. Their arrival is met with resistance from King Alfred of Wessex (also known as Alfred the Great) and the Saxons, who will do everything in their power to drive you from the land. Eventually Eivor comes in contact with the Assassins during their journey, thus kicking off the age-old Assassin vs. Templar conflict the series is known for.

Ubisoft is taking inspiration from Norse mythology — much like the studio did with Egyptian and Greek mythology in Origins and Odyssey, respectively — but we don’t know what role the gods will play just yet. Apparently, the lore will be more grounded than what we saw in Odyssey.

The present day story will again be playable and follow Layla Hassan from the previous two titles. Ubisoft apparently found a way to “blend the present day into a new type of experience for players,” but it’s unclear what this means.

Like Assassin’s Creed Odyssey before it, Valhalla will continue the series’ jump into RPG territory. Players in Valhalla will be able to forge political alliances and choose dialogue options that will affect the story. A revamped combat system now allows players to dual-wield any combination of weapons (including two shields) against a “greater variety of enemies than ever before.” Whether you want to brutally decapitate them with a war axe or stealthily kill them in the shadows with your hidden blade (it’s back!), the choice is yours. This is all about nailing that visceral feeling of being a Viking warrior.

It seems like Ubisoft heard complaints loud and clear, because some penchants from the earlier Assassin’s Creed games are returning. Not only is the hidden blade back, but it can also be upgraded so that you can instakill just about anyone, just like the good old days. Social stealth is also making a return, though it’s unclear just how our viking warrior will be blending into the crowds. And when a fan asked if there would be any tombs in Valhalla, Lead Writer Darby McDevitt teased that there are “many buried secrets.”

Not only is the hidden blade back, but it can also be upgraded so that you can instakill just about anyone.

New features include raids, settlement growing, and the ability expand your power and influence. With raids, you can pillage enemy villages and fortresses across England for valuable resources. Settlement growing appears to be like what Assassin’s Creed 2 and Brotherhood offered with Monteriggioni and Rome, but greatly expanded with more depth. Players can construct and upgrade barracks, blacksmiths, tattoo parlors, and more.

One such settlement will serve as a hub for the player. “It’s at the center of our quests and the center of the decisions you make. We want players to see the consequences of their actions,” Lead Producer Julien Laferrière told Eurogamer. 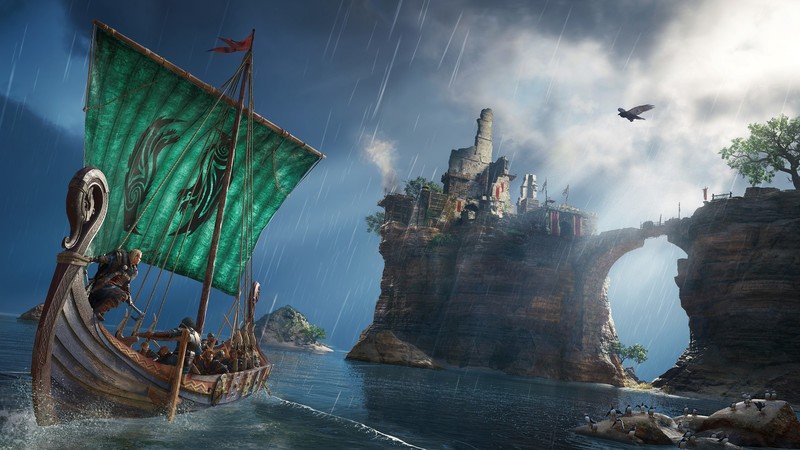 “It really changed the shape of the game we were making,” Laferrière said. “Instead of exploring one territory, then moving on to another and having no real opportunity or reason to return, the settlement changes the structure. So you’ll go on an adventure and then be encouraged to come back to your settlement. It changes the way we’re playing the game we’re making – at least, that’s the bet we’re making.”

In a first for the series, players can create customize a unique Viking raider and share it online with friends who can then use it during their own raids (though there is so co-op or multiplayer in Valhalla). Players will also be able to customize hair, tattoos, war paint and gear of their own character. Gear can be upgraded throughout the game so that a set of weapons or armor you begin the game with will still feel formidable as you progress.

Ravens are largely associated with the Norse god Odin.

Instead of your trusty pet eagle to help guide you along your journey and act as some eyes in the sky, a raven will be filling that role in Assassin’s Creed Valhalla. After all, ravens are largely associated with the Norse god Odin.

“We have a bunch of new abilities for the raven,” Laferrière said. “We used it as a reason to re-explore the way players can explore the world so it is less reliant on UI. If you notice a distraction somewhere it’s probably because there’s some content there.”

Naval gameplay will be a major element as well, but don’t expect to be fighting on the sea often. Vikings are known for being fearsome warriors, and many battles were won because of their skills as sailors, but they didn’t partake in naval combat like you’d expect. The Vikings longship will play a crucial role in traversing the map and bringing your raiding party where it needs to go. Ismail teases a lot of surprises in store with the longship, but he did not go into detail.

The company revealed that for the first time ever, players will be able to switch between male and female Eivor whenever they’d like in the menu, meaning both genders are canonical to the story, though the reasoning for why this is possible was not explained. Players will also be able to play as Layla in the open-world of England. Previously, modern day characters could not be played in the historical simulation. 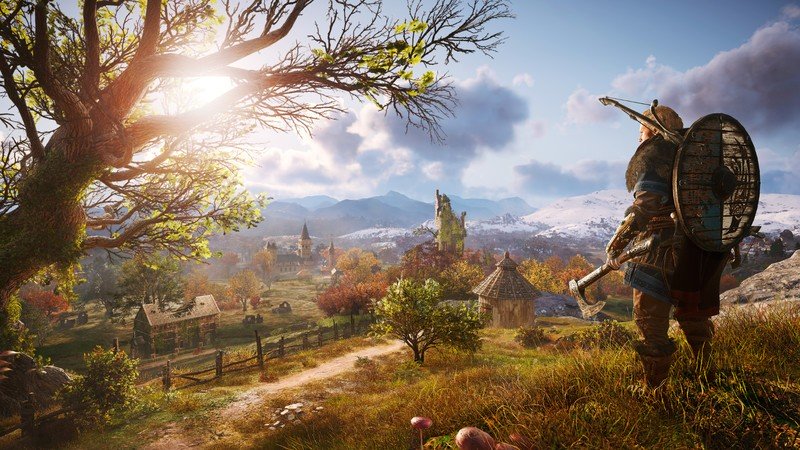 Assassin’s Creed Valhalla will release Holiday 2020 for Xbox One, Xbox Series X, PlayStation 4, PlayStation 5, PC (Epic Games Store and Uplay), and Stadia. You can pre-order it now. It is unknown if the current global pandemic has affected its release date in any way.

For anyone worrying about which Microsoft console to buy it for, it will support Xbox Smart Delivery, meaning that one purchase gets you the game on both Xbox One and Xbox Series X. It will run at 4K on Microsoft’s upcoming platform. It is unknown what resolutions it will run at on Sony’s consoles or if you can buy one copy for both PS4 and PS5.