Home How to Comic-Con At Home: How to watch it and which panels to watch
How to 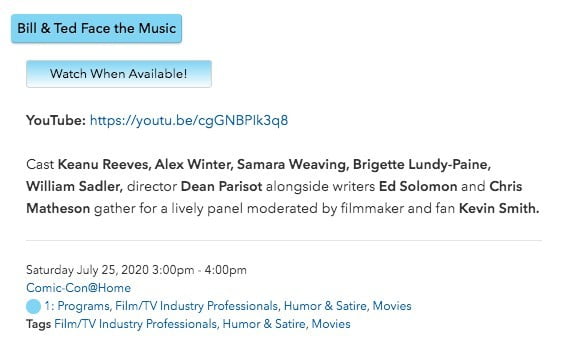 The last few months have been a roller coaster of emotions for fans of San Diego Comic-Con, which was canceled for the first time in its 50-year history in April, only to be revived as a virtual, streaming event a month later. The five-day event, titled Comic-Con at Home, officially kicks off July 22 and will include an impressive list of streaming panels, interviews, themed discussions, and sneak peeks from the worlds of comics, gaming, movie, and television.

Comic-Con International (as the annual event is formally called) will return to San Diego in 2021, but you can get the Comic-Con experience at home this year by watching some of the 300-plus virtual panels that will bring together artists and creators in various media for discussions via streaming video. In order to make planning a little easier, we’ve put together a brief explanation of how to watch the Comic-Con panels, as well as a list of some particularly noteworthy events you won’t want to miss.

How to watch Comic-Con At Home

The full schedule of events across all four days of the virtual convention can be found on the website for Comic-Con At Home. The schedule can be filtered by day, as well as by topics (i.e., “movies,” “animation,” or “television”), and is searchable for specific terms (“Marvel” or “Star Wars,” for example).

Once you’ve identified a panel you want to see, you can watch it on the day and time indicated on each panel-specific page. A link is available in each panel’s description that will launch a page with the video embedded on it, and in some cases, a link to the streaming video on YouTube or other sites will also be available. All of the panel videos will also be available on the official Comic-Con channel on YouTube throughout the week, too.

Unlike the actual San Diego Comic-Con, if you aren’t able to watch the panel live, you’re not out of luck. According to the Comic-Con website, most of the panels (but not all of them) will still be available to watch after their initial streaming broadcast — although some might have a limited period of availability, so make sure you watch them as soon as possible if you don’t want to miss out.

If you’re wondering what’s worth watching, here are some of the most noteworthy movie and TV panels on the schedule so far.

Cast members and creators from Star Trek: Discovery, Star Trek: Lower Decks, and Star Trek: Picard join franchise producers Alex Kurtzman and Heather Kadin to talk about the past, present, and future of their respective corners of the Star Trek universe during this hour-long panel. The Discovery cast will also conduct a virtual table read of the season 2 finale, Such Sweet Sorrow, Part 2.

Hulu’s hit animated series from Rick & Morty co-creator Justin Roiland and Star Trek: Lower Decks creator Mike McMahan gets its own panel, and the aforementioned co-creators of the show will be joined by cast members Thomas Middleditch, Sean Giambrone, and Mary Mack, as well as executive producer Josh Bycel. The panel will also deliver a sneak peek at season 2 of the series.

Learn more about Disney’s upcoming anthology series that explores how Marvel Comics’ legacy is built on the real-world people, places, and stories around us now and how storytelling and pop culture have blended to create the Marvel universe. Directors Gillian Jacobs, Paul Scheer, and executive producers Sarah Amos and Jason Sterman will all be in attendance to discuss the Disney+ show.

The Apple TV+ series Mythic Quest: Raven’s Banquet has earned plenty of praise, and this panel puts the spotlight on the women both in front of the camera and behind it that have made the show so successful. In attendance will be the series’ co-creator and executive producer, Megan Ganz,; writer and cast member Ashly Burch, Ubisoft Film & Television’s director of TV development and Executive Producer, Danielle Kreinik; and Ubisoft Red Storm’s VP of product development, Elizabeth Loverso.

The cast and creative team from Amazon’s hit sci-fi comedy will preview what fans can expect from season 2 of Upload in this event, which will feature creator, executive producer, and director Greg Daniels along with cast members Robbie Amell, Andy Allo, Kevin Bigley, Allegra Edwards, and Zainab Johnson.

Three of Hollywood’s hottest filmmakers will discuss filmmaking and their past, present, and future projects in this hour-long discussion of the art of making movies. The event will bring together Alita: Battle Angel and Sin City director Robert Rodriguez, Jurassic World director Colin Trevorrow, and TRON: Legacy and Top Gun: Maverick director Joseph Kosinski.

Amazon’s brutal (and brutally funny) series set in a world where superheroes have a nasty habit of abusing their powers and celebrity returns in September, but this panel will bring much of the show’s cast together for a behind-the-scenes look at what’s to come. Executive producer Eric Kripke will be joined by Karl Urban, Jack Quaid, Antony Starr, Erin Moriarty, Jessie T. Usher, Laz Alonso, Chace Crawford, Tomer Capon, Karen Fukuhara, and Aya Cash, with fellow executive producers Seth Rogen and Evan Goldberg also expected to make an appearance.

The authors of Lucasfilm’s upcoming Star Wars publishing projects discuss what they have planned for the sci-fi saga and give you a sneak peek at future events in a galaxy far, far away.

Hulu’s next foray into the Marvel universe will introduce audiences to Daimon Helstrom, aka “Son of Satan,” in a horror series expected to debut in late 2020. The series’ showrunner and cast will offer the first look at the Marvel-inspired show that puts a scary spin on the Marvel Cinematic Universe.

Peacock’s upcoming series explores the terrifying possibilities of a world in which seeing isn’t believing when it comes to the news and how technology like facial recognition software and image manipulation can be abused to change our perception of the truth. Famke Janssen, Ron Perlman, and the rest of the show’s cast and creators will deliver the first look at the series.

Celebrated filmmaker Joss Whedon, who made Buffy the Vampire Slayer one of television’s greatest cult hits and brought the Marvel Cinematic Universe together for the first time with The Avengers, will discuss movies and his career in this solo panel.

Disney’s new scripted series will explore the early days of the U.S. space program and follow a group of astronauts hoping to become the first men in space. The panel will be moderated by former NASA astronaut Mae Jemison, and feature the series’ cast and showrunner.

Get your first look at the second season of the Apple TV+ series set in an alternate timeline where the international space race never ended. Executive producer Ronald D. Moore (Battlestar Galactica) and the series’ cast will look back on season 1 of For All Mankind and provide a peek at the next season of the sci-fi drama.

The cast and creative team on Peacock’s sci-fi series inspired by Aldous Huxley’s groundbreaking novel of the same name will discuss the first season of the show, offering a hint at what’s to come just a week after the show’s July 15 premiere.

You can learn more about Comic-Con At Home and the schedule of events at the show’s homepage.