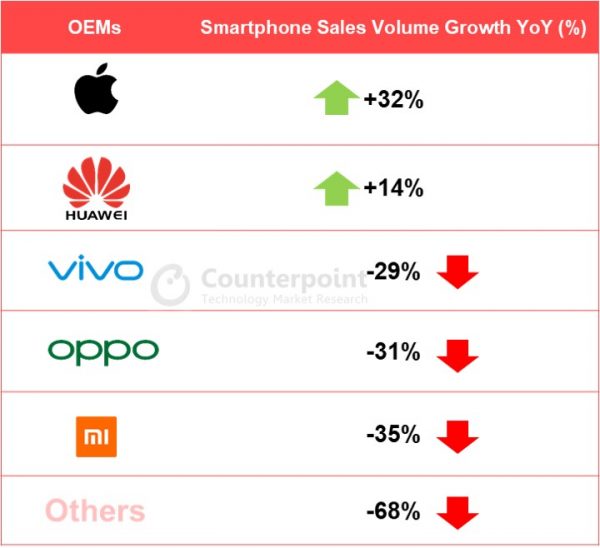 Apple’s iPhone was the fastest-growing smartphone brand in China in the second quarter, according to data published by Counterpoint Research.

Bouncing back from the decline in the market in Q1 following the global health crisis, Apple grew 32% year on year thanks to the continued popularity of its iPhone 11 lineup and heavy discounting at an annual shopping festival that Apple doesn’t usually participate in.

This year’s new iPhone SE also entered into the top three best-selling iPhones in the quarter, mirroring the more affordable device’s performance in the United States in the same quarter.

Apple’s reversal of fortunes in China are particularly impressive given that it saw an almost 60 percent slump in iPhone sales in February compared to the previous year, shifting fewer than 500,000 handsets across the country.

The surge in ‌iPhone‌ sales in Q2 comes amid a 17% year-on-year decline in overall smartphone sales in China. In addition, one third of total smartphone sales during the quarter were 5G devices, which is the highest adoption of 5G in the world and bodes well for Apple’s 5G “iPhone 12” lineup, expected this fall.Tag: China
This article, “Apple Was Fastest Growing Smartphone Brand in China in Second Quarter, Buoyed By Strong iPhone SE Sales” first appeared on MacRumors.com