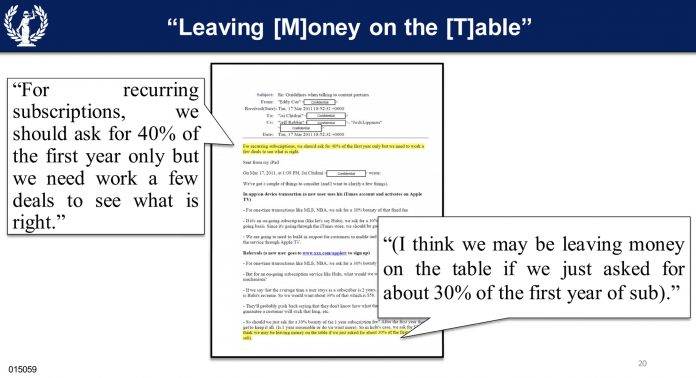 Apple once considered taking a 40 percent cut from some subscription apps, according to documents shared today by the House Judiciary Committee (via Bloomberg).

Back in March 2011, Apple’s services boss Eddy Cue emailed three other executives and suggested Apple should “ask for 40% for the first year only,” but that a “few deals” needed to be worked out for Apple to “see what is right.”

One of the executives, Jai Chulani, wrote back that Apple could be “leaving money on the table” asking for 30 percent in the first year of subscriptions.

At the time, the emails referred to apps that offered digital content like Hulu on the Apple TV rather than apps running on iPhone and iPad, though Apple had launched App Store subscriptions in February 2011.

Apple CEO Tim Cook during his testimony at today’s antitrust subcommittee meeting emphasized that Apple has not changed its ‌App Store‌ fees since the ‌App Store‌ launched, and has in fact lowered them, referencing the 15 percent cut.

Ahead of the antitrust meeting, Apple also commissioned a study suggesting Apple’s ‌App Store‌ fees are in line with the fees collected by other digital marketplaces and service providers.Tag: App Store
This article, “Apple in 2011 Considered Collecting a 40% Fee From Some Subscription Apps” first appeared on MacRumors.com