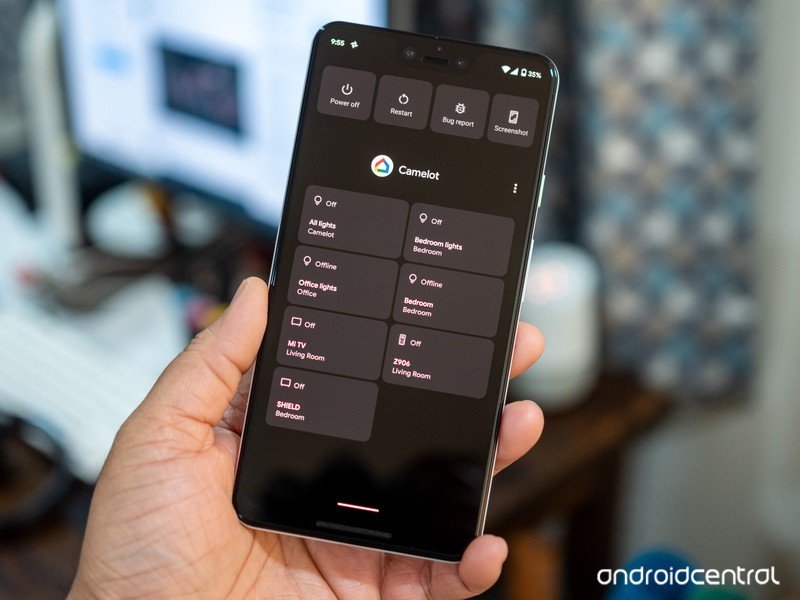 A button should do more than turn on your screen, and in Android 11 it can.

Android 11 isn’t filled with huge changes that make everything look and feel different. But there are some really nifty goodies in the next version and one of them is the new power button menu.

Up until now the power button on your phone was really only there to turn it on and off. That’s a waste when pushing it brings up its own menu. Android 11 replaces the vertical box that lets you shut down, restart, or take a screenshot with two other features most people want quick access to: Google Pay and smart home controls.

You still have the emergency button and the power controls but now they are across the top of a new window. Right under is a picture of your default designated Google Pay card to let you know you’re ready to pay for purchases. Just hold your phone to a credit card reader set up to use Google Pay and you’re good to go. You can’t access Google Pay when your screen is locked, so it offers the same security as the old way of tapping the icon and opening the app did. It’s just easier to get to it which makes it easier to use.

While quick access to Google Pay is a great idea, the real star of the show are the smart home controls. Any device you have set up to work with Google Assistant through the Google Home app is available, and you can do things like turn off or turn on lights or toggle a smart lock with the tap of a button. Other smart devices, like a Nest Thermostat, open a quick menu when you tap the button. It’s just like using a smart display.

Smart home controls also only work if your phone is unlocked, so you’ll either have to unlock it and press the power button or tap one of the controls to be prompted to unlock your screen. Part of me wishes I could tap to turn on my porch light without unlocking, but the other half appreciates the security.

The new power menu is one of those features you really don’t appreciate until it’s there. Pulling up my Pixel 4 to unlock it and holding the power button to use Google Pay feels natural, and sometimes I don’t want to talk to my phone to turn on a light. It’s a lot better than hunting down the right apps to do these small things, and I wonder if Google plans to move other quick features to the new power menu.

These are bar-none the best Android tablets for kids

Every kid wants a tablet. But deciding to invest in a tablet for your child is a big step, and
Read more

Snooker live stream: How to watch the World Snooker Championship

Originally scheduled to take place in April, the 2020 World Snooker Championship finally kicked off at the Crucible Theatre this
Read more

These are bar-none the best Android tablets for kids

Every kid wants a tablet. But deciding to invest in a tablet for your child is a big step, and
Read more