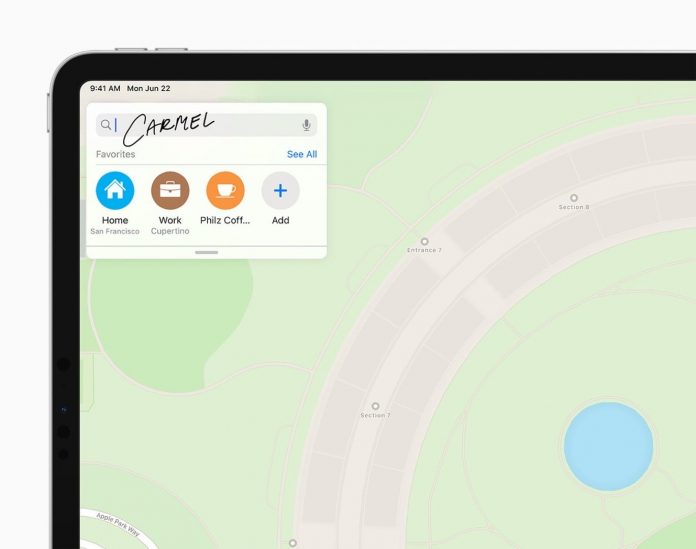 Apple’s virtual Worldwide Developer Conference for 2020, brought a slew of new offerings to the table, including improvements for its iPadOS platform. iPadOS 14, will be inheriting features from its smaller sibling, iOS 14, including customizable widgets, an updated Messages app, and a new App Library screen; however, it will also be gaining a few tricks of its own. Here are the five best new features coming in iPadOS 14.

If you love using Apple Pencil with an iPad, then we’ve got great news, as Apple has expanded its capabilities to make handwriting as powerful as typed text. With iPadOS 14, users won’t need to put down Apple Pencil to interact with text fields; a new Scribble feature will enable writing directly into these fields, thanks to Apple’s handwriting recognition technology. Apple’s handwriting engine will even be able to recognize the use of languages such as both English and Simplified Chinese, within a single sentence.

Using onboard processing, iPadOS 14 will also enable users to select handwriting with a double or triple tap, altering the writing or moving it into a separate application with seamless handwriting to text conversion and copy and paste. The latest version of iPadOS will be able to auto-detect written content such as phone numbers and addresses, allowing a simple tap to launch a call or bring up directions in Maps.

Mac users watching Apple’s latest keynote may have recognized something familiar, a new Spotlight-style universal search function. For years, Spotlight on the Mac has allowed users to search for content across their machine or the web, as well as receive intelligent suggestions. While Apple isn’t calling the feature Spotlight, it is evident that the new search upgrade on iPadOS 14 has borrowed from its older sibling.

Unlike previous incarnations of search on iPad, the new universal search function will no longer cover the entire screen, instead, presenting you with a similar search bar as seen on the Mac. Apple notes that the new experience is designed to be less-jarring, allowing users to continue their work without feeling as though they have been launched out of the app they are currently working.

The latest iteration of iPadOS isn’t receiving the substantial design overhaul that we’ll be seeing within MacOS, but we’ll still be seeing a few improvements. The most significant change is the introduction of a new sidebar that can be integrated into apps, allowing users to move around the application with greater ease. With screens on iPad devices being quite large, it makes sense to include a UI element that serves up more information than standard tabs.

In its demonstration, Apple showed off designed versions of the Files, Photos, and Music, apps. When in Files, users are presented with a broader view of their files, allowing interactive elements to be displayed within the new sidebar or a compact toolbar UI. Those who enjoy perusing photos or using Apple Music will be happy to see a new interface that doesn’t require you to dig around for your favorite albums or playlists.

Nothing can be more frustrating than working on your masterpiece and being bombarded with full-screen call notifications. Apple is finally addressing the problem, with iPadOS 14 introducing a new compact calls UI. When a call comes in, whether it be from FaceTime, your iPhone, or a third-party VoIP client, a small notification pop up will appear with the abilities to answer, hang up, or dismiss the event.

Users who call upon Siri will also find a change with a more compact Siri UI. While the new interface was announced for both iOS 14 and iPadOS 14, iPad users will see the new floating Siri element in the lower corner of their screen. Siri on iPad can even bring up information for reference, such as a list from the Reminders apps.

If you’ve opted out of using the default iPadOS Mail client, clicking on an email address can now open an app of choice, such as Airmail or Spark. The same goes for browsers, where Google Chrome or Mozilla Firefox can now open as default if a user clicks on a web link within another application.