Some iPhone 11 Users Complain of Display With Odd Green Tint 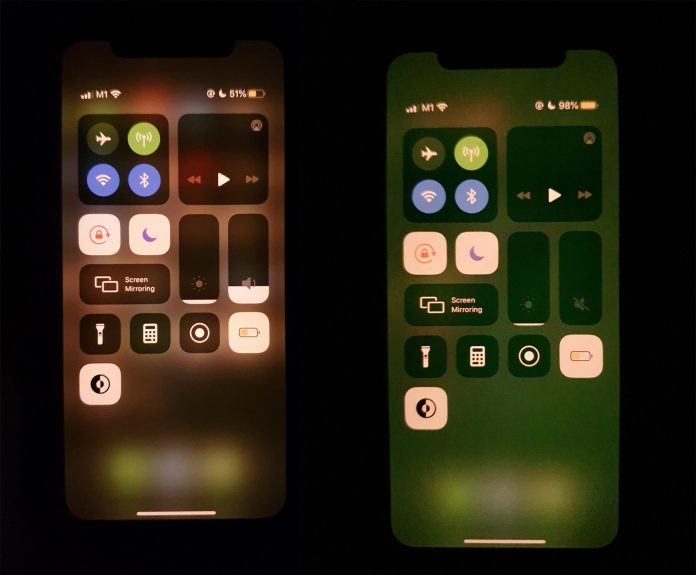 Some iPhone 11, 11 Pro, and 11 Pro Max owners have been noticing an unusual green tint to their iPhone displays when first unlocking the device, based on complaints shared on Reddit and the MacRumors forums.

Image of green tint appearing briefly on the right, from MacRumors reader Oceannn

It’s not clear what’s going on, but almost all of the affected users say that the green tint is visible just for a few seconds after unlocking an ‌iPhone‌. Some users have seen it at night with Dark Mode and Night Shift enabled, while others say it occurs when brightness is at the lowest possible setting. A MacRumors reader describes the problem:

About 25% of the time when I unlock my launch day iPhone 11 Pro the screen looks all washed out with a green tint. After about 3 seconds it flashes back to normal. Anyone ever have this happen or know if this is a problem on ‌iPhone‌ 11s? I should probably do a restore / set up as new but I’m trying to avoid that if possible.

According to some users, the weird tint has been popping up since the iOS 13.4.1 update, which suggests that it may be a software issue. Some people were able to get the tint issue to cease after restarting, but others were not.

If this is indeed a software problem, Apple may be able to address the issue in a future iOS update. iOS 13.5.5 is in testing right now, and it’s not clear if that fixes the bug as of yet.
This article, “Some iPhone 11 Users Complain of Display With Odd Green Tint” first appeared on MacRumors.com