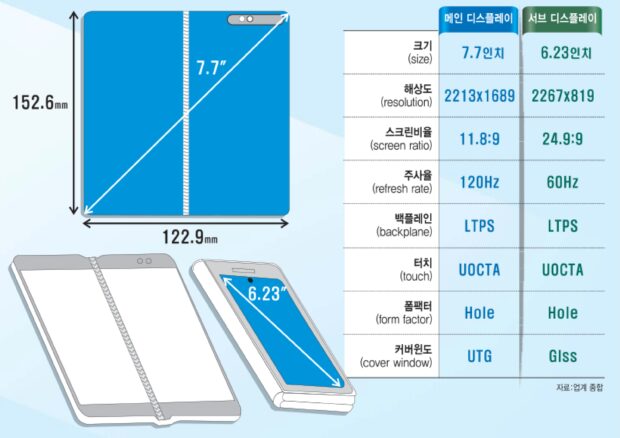 There seem to be some screen specifications of the upcoming Galaxy Fold 2. And Samsung has a lot in store. It wants to avoid mistakes from the past and silenced criticism of the original Fold.

It seems like an eternity ago, but maybe you can still remember. The launch of the first Galaxy Fold was not about roses. The spectacular presentation was followed by a dramatic review by tech journalists. They broke one copy after another. Samsung decided to cancel the entire launch, make reinforcements, implement improvements and do damage control. The launch of ‘foldables’ suffered a costly dent.

And yet this was not the end of foldable phones. In fact, it only aroused more interest. Especially because there is as much more as possible than there is now. And that’s why we’re always looking forward to new models. So are those of the Galaxy Fold 2. New details show that Samsung has learned from its mistakes. For example, the Fold 2 will have an UTG screen, also known as ultra thin glass. The original Fold had a layer of plastic which still feels a lot cheaper. UTG we saw earlier in the Z Flip which received rave reviews.

The small screen in front of the Fold also seems to be a thing of the past. The 4.6 inch screen has been exchanged for a 6.23 inch one. Another improvement is that the almost ridiculously large notch inside gets a makeover. It remains large but possibly it goes from a ‘bite’ to a punch-hole. The screen size goes up from 7.3 to 7.7 inches. Possibly this is due to thinner screen edges, but we don’t rule out the possibility that the device has physically grown larger as well.

Another important advantage is the (much) higher refresh rate of 120Hz. This should provide much smoother images. The front panel stays on a more traditional 60Hz. Something that seems to be missing, by the way, is an S Pen. That function remains (for the time being) exclusive for the Note-series. Expect 5G support and an extremely high price tag. We expect a launch sometime in August, possibly at the same time as the Note 20 series.