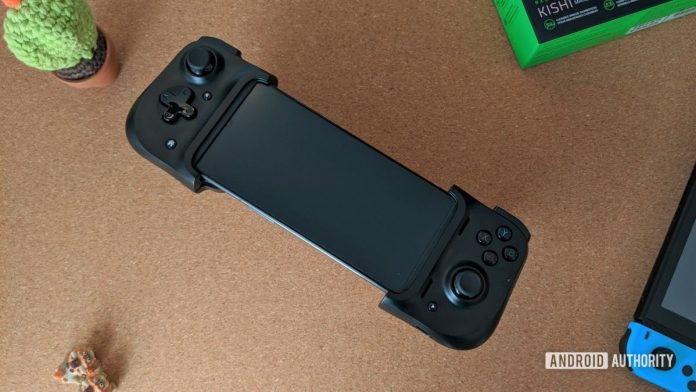 Despite being a 50-billion-dollar industry, smartphone gaming is really still finding its footing. Most smartphone controllers on the market are simply console controllers with a smartphone stand attached, which can lead to bulky contraptions that are a major hindrance to portability. Switch-like controllers, such as the Razer Junglecat, seek to solve this problem by sandwiching your phone between two gamepads. Can Razer’s latest effort solve the compatibility problems that plagued previous efforts? Here is Android Authority’s Razer Kishi review.

About this Razer Kishi review: I wrote this review after using the device for roughly two weeks with a Pixel 3 and OnePlus 7. I tested it with mobile games, emulators, and cloud gaming services. Razer provided the review unit to Android Authority.Show More

What is the Razer Kishi?

The Razer Kishi is a telescopic mobile controller that fits snugly around a wide variety of smartphone screens. It connects directly to your phone’s USB-C port, which offers much lower latency than Bluetooth controllers. Another advantage of this approach is that the controller doesn’t ever run out of battery life or drop the connection. However, this also means that the Razer Kishi is mobile-only; it isn’t designed to work with PCs or consoles.

Still, despite its hefty design that’s significantly larger than Nintendo’s Joy-Cons, it’s one of the best mobile gamepads on the market. The Razer Kishi’s price tag is set at $79.99 / €89.99, which is expensive though still cheaper than previous Razer gamepads such as the Junglecat and Raiju. Most off-brand, Switch-like controllers are around $50, making the Kishi’s price a premium yet still competitive.

How does the Razer Kishi work? 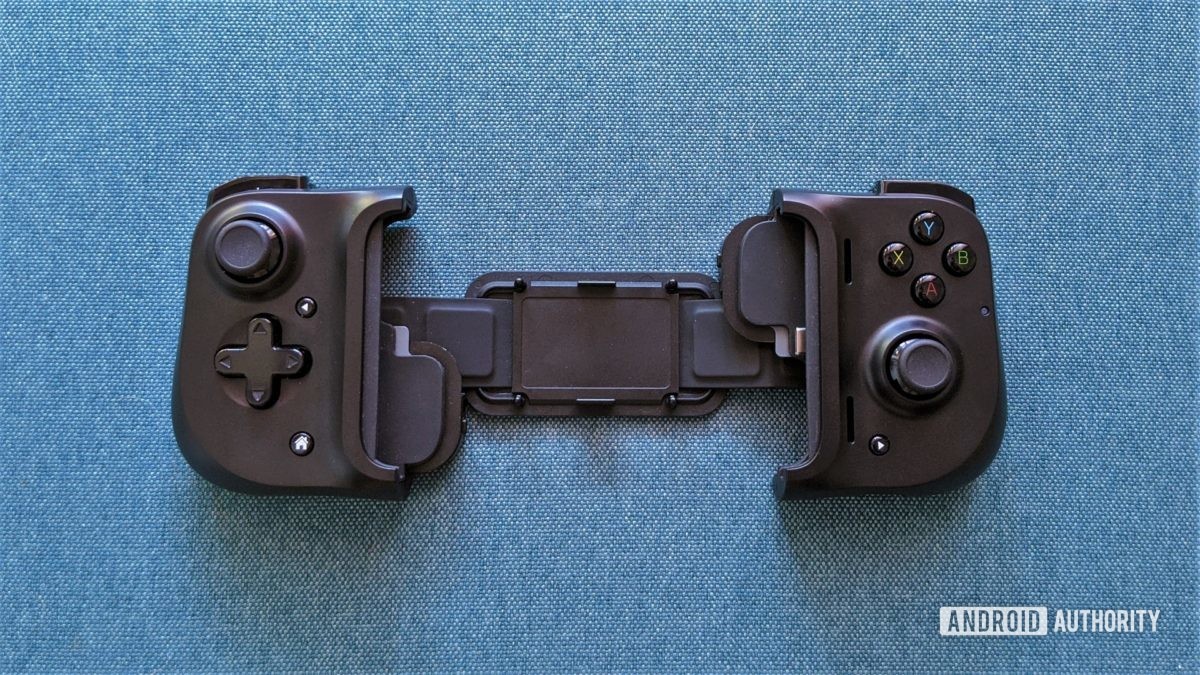 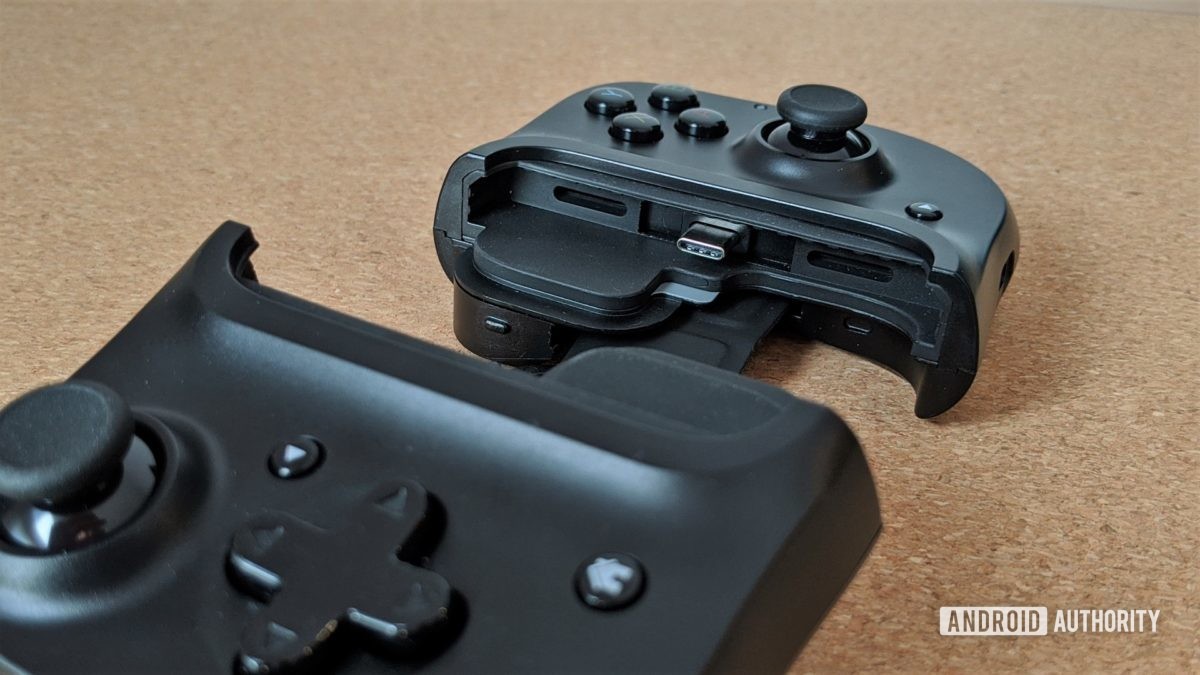 This Razer gamepad was made in partnership with Gamevice, which makes a number of similar wrap-around smartphone and tablet controllers. The Razer Kishi is essentially two halves of a controller connected by an elastic band in the back. Your phone plugs into the USB-C connector on the right hand side, and slips into another padded slot on the left for a secure fit.

When not being used, the controller folds up into a compact shape that’s smaller and lighter than a traditional controller, making it perfect for taking with you wherever you go. The two sides lock together so you don’t have to worry about it flopping around in your bag. In fact, the latches on the back could be stiff and difficult to open when locked.

While not in use, the Razer Kishi folds into a light, compact package.

Once plugged in, it works just like any other controller plugged into a phone with an OTG cable. It isn’t required, but there is a Razer Kishi app on the Google Play Store that lists all of the games compatible with the controller. You’ll also use the app to update the firmware of the controller, so it’s worth the download if you buy the Kishi.

It has all the inputs you’d expect from a console controller: an eight-way D-pad, two clickable analog sticks, two triggers, two bumpers, and more.

It should go without saying that the Razer Kishi will not work for games in portrait mode, but few of these support controller inputs anyway.

Who is the Razer Kishi for?

Both casual and avid gamers alike will find a lot to like in the Razer Kishi. It’s relatively compact, but it’s also larger than Nintendo’s Joy-Cons or the Razer Junglecat. This makes it a better choice for people with large hands. It’s also exceptionally light, so holding it for long gaming sessions won’t wear you out.

Whether it’s for retro gaming on an emulator or playing controller-enabled games such as Fortnite, Dead Cells, or Stardew Valley, the Kishi really gets the job done. The only downside is a slightly mushy D-pad, so fighting game aficionados might want to look elsewhere.

What phones are compatible? 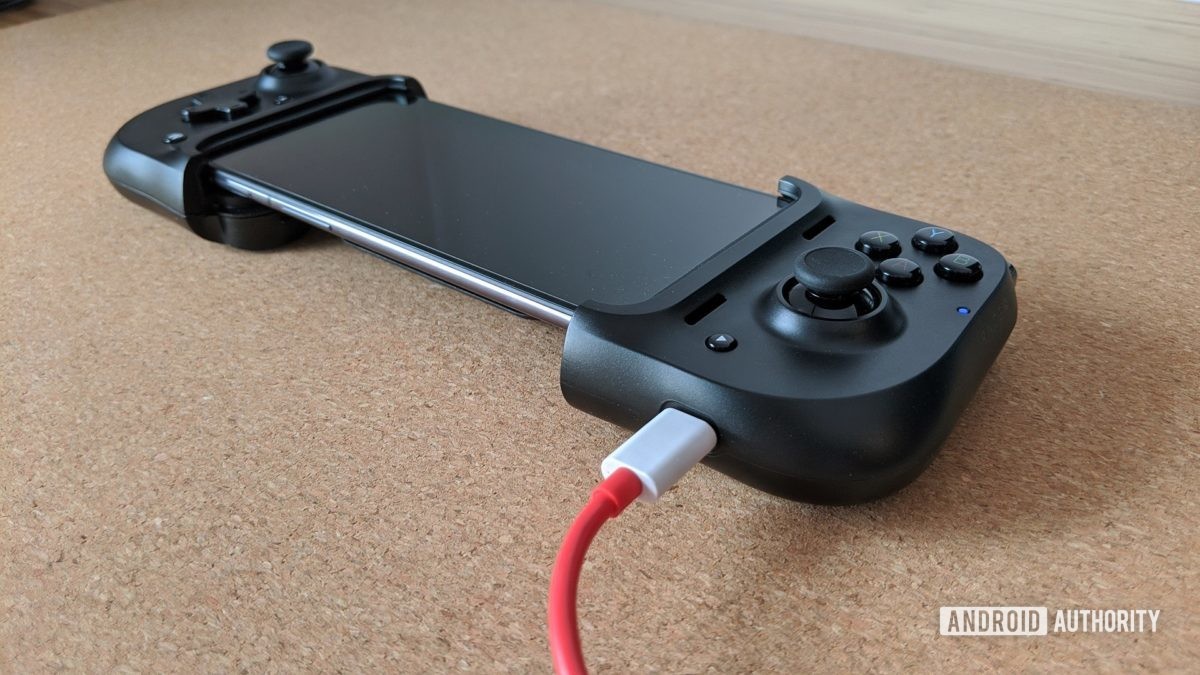 One of the best things about this Razer gamepad is just how widely compatible it is. The list of Razer Kishi-compatible phones covers just about any Android phone with USB-C charging. (You will almost certainly need to remove any phone cases while using the controller.) The inside is soft rubber, so you don’t have to worry about it scratching your phone or slipping loose while gaming.

By way of comparison, the Razer Junglecat requires a different case for each model of phone, severely limiting compatibility. Those issues are virtually eliminated with the Razer Kishi. There is a downside to this approach, however, as headphone ports on the top or bottom of a phone will be covered and unusable. There are two relief holes for bottom firing speakers, but the only way to get decent sound is with a good pair of Bluetooth headphones.

If you’re thinking of using a pair of USB-C headphones or a wired gaming headset, they won’t work either. The USB-C port on the bottom of the controller is only for pass-through charging. This is a bit disappointing. Adding a headphone jack to the body of the Razer Kishi would have truly made it the perfect mobile gamepad.

Does the Kishi work with iPhones?

Since the Razer Kishi plugs directly into a phone’s charging port, there are two separate versions, one for Android and one for iOS. The Android version of the Razer Kishi was released on June 9, but the version for iPhones isn’t expected until later this summer.

How about cloud gaming? 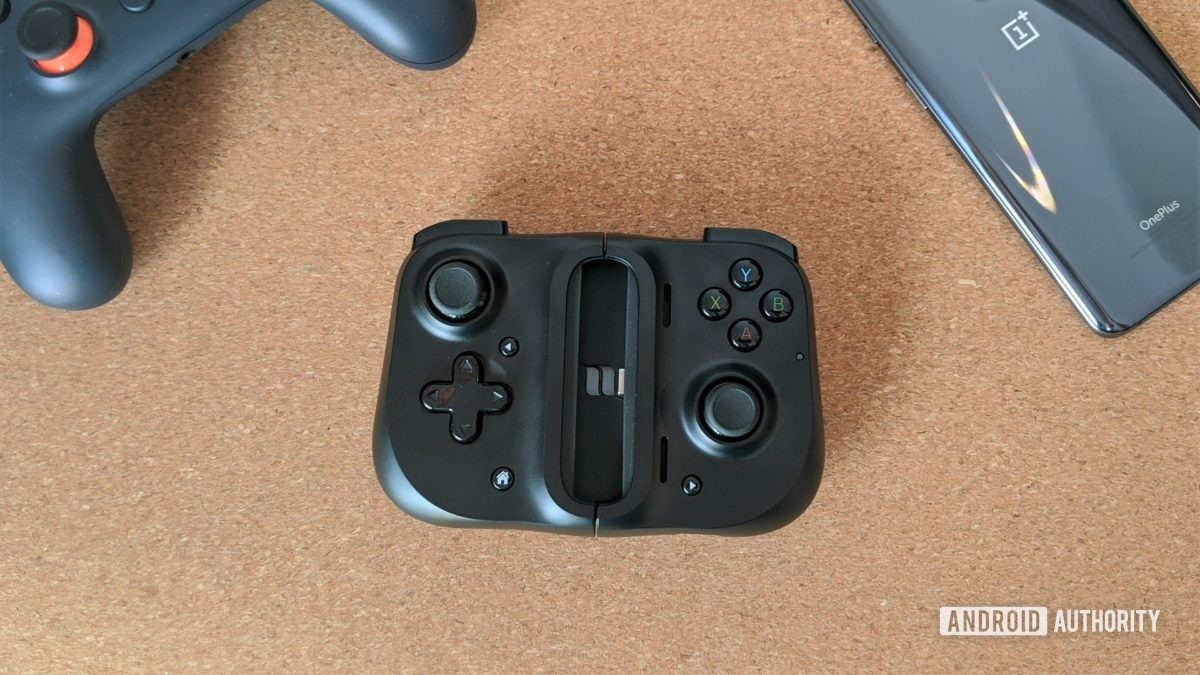 Cloud gaming has grown immensely in popularity with the official release of Google Stadia and GeForce Now, and Razer promotes its gamepad as “cloud-gaming compatible.” While this is true, and the USB-C connection works with all cloud gaming services, certain design choices prevent the Razer Kishi from being an ideal choice.

Because of the way the controller hugs and covers the top and bottom edges of the phone, it can have a detrimental effect on some Wi-Fi connections. This was the case for the Pixel 3 and OnePlus 7 that I used for testing, and I suspect it will hold true for other phones as well. Switching from any other standard controller to the Razer Kishi resulted in immediate stuttering in video and audio while streaming games, even with no change in environment.

Your mileage may vary depending on which phone you have and where its antennae are placed, but for true cloud gaming you might be better off with something more open like the official Stadia claw accessory or similar options.

Razer Kishi review: Is it worth it? 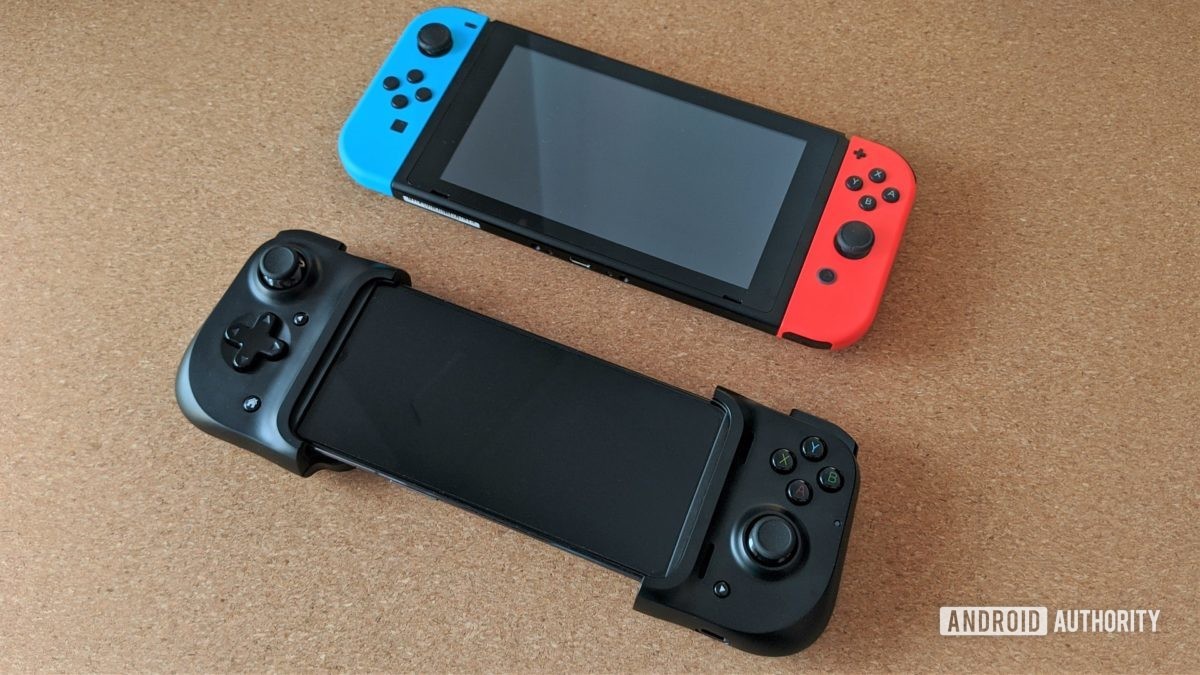 If you’re looking for a premium, portable, mobile-only controller, the Razer Kishi is a fantastic choice. The lack of wired headphone support will be a major downside for some, but headphone jacks are increasingly rare on new phones anyway, and Bluetooth appears to be the way forward.

There are some cheaper Switch-like controller options on the market, but most rely on Bluetooth connections and can’t compare on build quality. It’s worth spending a bit more for the Kishi if you’re seeking something sturdy.

As for more traditional controllers, we’ve got a whole list of alternatives. Our favorite is the Xbox One controller for its wireless and wired support, plus the variety of aftermarket clips to attach smartphones of any size. The Xbox controller isn’t as light or portable as the Razer Kishi, but it will perform better on cloud gaming platforms and leave your headphone jack uncovered.

Save $500 on the Razer Blade Pro 17, and more of the best gaming laptop deals

What are the best USB-C headphones?

The best Razer laptops you can buy right now