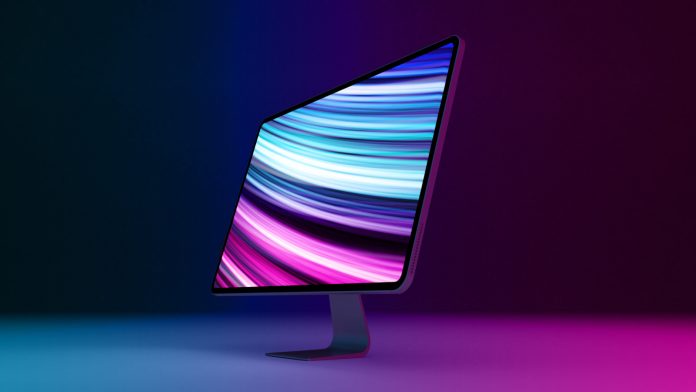 WWDC is shaping up to see some significant Mac news, starting with word earlier today that Apple will be beginning its shift to its own Arm-based processors, and now leaker Sonny Dickson is claiming that Apple will be introducing a redesigned iMac at the event.

MacRumors mockup of iPad Pro-style ‌iMac‌
According to Dickson, the new ‌iMac‌ will have “iPad Pro design language” and thinner bezels similar to those seen on Apple’s Pro Display XDR that accompanied the new Mac Pro last year. The ‌iMac‌ will unsurprisingly feature the custom T2 chip that has made way across the rest of the Mac lineup to integrate several security and controller functions.

Dickson also says the revamped ‌iMac‌ will include graphics processors from AMD’s Navi family introduced last year, and will go all-flash on the storage front with the discontinuation of the hybrid Fusion Drive system that has paired a smaller SSD with a larger traditional hard drive to balance speed and capacity.

Apple’s ‌iMac‌ hasn’t been updated in over a year, so it’s certainly due for an update. Reliable leaker CoinX claimed in March that an ‌iMac‌ update was coming “soon,” but hasn’t shared any additional information on it since then.

Meanwhile, Intel announced new “Comet Lake” processors in late April that would be appropriate for the ‌iMac‌, although we haven’t heard specifically which processors Apple plans to include in the updated ‌iMac‌.

Finally, an April rumor claimed that Apple is planning to introduce a lower-priced 23-inch iMac in the second half of this year, which has led to some confusion around timing for any ‌iMac‌ release. It remains to be seen if this 23-inch model is arriving at WWDC, and if so, what overall changes we may see to the size options considering the ‌iMac‌ is currently offered in 27-inch and 21.5-inch sizes.Related Roundups: iMac, WWDC 2020Tag: Sonny DicksonBuyer’s Guide: iMac (Don’t Buy)
This article, “New iMac With ‘iPad Pro Design Language’ and Thin Bezels Reportedly Coming at WWDC” first appeared on MacRumors.com

Facebook
Twitter
Pinterest
WhatsApp
Previous articleiPhone 12 Production Expected to Begin in July
Next articleApple Has Now Reopened Over 300 Stores, Including Locations in France, Sweden, and the Netherlands This Week