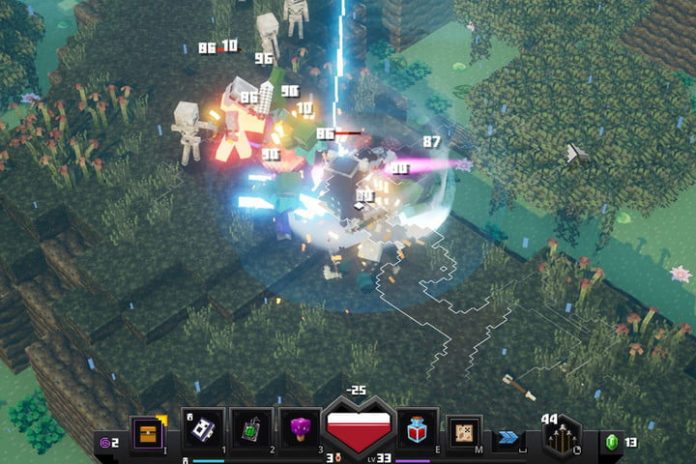 Minecraft Dungeons is here but not in its full glory. Although the short, simplified dungeon crawler offers dozens of hours of fun, it doesn’t offer that fun across platforms. At launch, Minecraft Dungeons only allows players on the same platform to play together. Thankfully, a free update in the future will solve that problem. Here’s everything we know so far about Minecraft Dungeons cross-platform support.

The Mojang FAQ about Minecraft Dungeons makes no bones about cross-platform support: “At launch you’ll be able to play online multiplayer with players on the same platform.” So, if you’re on Xbox One, you can only play with other players on Xbox One, as of right now. Thankfully, the FAQ continues, saying, “Our goal is to let everyone play together regardless of platform, and we’re looking forward to enabling cross-platform play in a future free game update.”

Minecraft Dungeons doesn’t support cross-platform play now, but Mojang is very clear that it wants crossplay in the future. It’s possible that Mojang intended for crossplay from the start. As a game published by Xbox Game Studios with a strong multiplayer element, it’s strange that Minecraft Dungeons isn’t an Xbox Play Anywhere title. At launch, there was a sneaky exploit in the game that would allow Xbox One and PC players to join up, suggesting that crossplay was a feature intended for launch. It seems the exploit has since been patched, though we haven’t been able to confirm.

As for when the update will come, we don’t know. We don’t know what it will look like, either. Mojang hasn’t confirmed if Minecraft Dungeons will support crossplay across all platforms or just a select few (say, PC and Xbox). The game is currently available on Switch, PS4, Xbox One, and PC, and very few games support cross-platform play across all four.

Even with the free update, Minecraft Dungeons will have the same multiplayer restrictions it has now. You can play either a local or online multiplayer session, but you can’t mix the two. Additionally, there isn’t online matchmaking, and it won’t be coming in the future. In the FAQ, Mojang says, “Minecraft Dungeons is designed to be played together with your friends — either on a comfy couch or in a comfy online session.”

Cross-save and cross-progression in Minecraft Dungeons

Although we know crossplay is coming to Minecraft Dungeons, we don’t know if the update will include support for cross-save and/or cross-progression. In the FAQ, Mojang lumps crossplay and cross-save into the same question, though says very little about the latter. On the matter, the FAQ simply says, “Save files and game progress do not transfer across platforms.” There are hints that cross-progression could be in the update — we noted achievements on Windows after playing on Xbox One — but it’s unlikely. Getting all of the major platforms to play nicely together is a tall order, pushing games like Destiny 2 to manage save files separate from whatever platform someone is on.

If we do see cross-progression, it’ll likely be between Xbox and PC, given that Xbox Games Studios published Minecraft Dungeons.