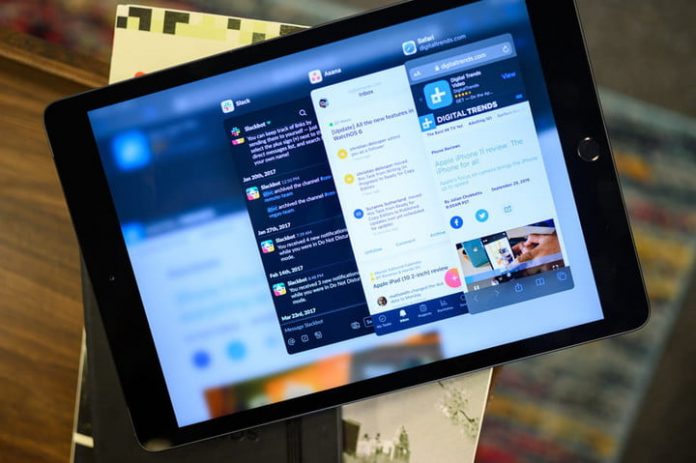 Apple markdowns are few and far between. Seldom do we really see significant price drops on the tech titan’s numerous products. But that’s exactly what we’re seeing today. Right now, the Apple Watch Series 5 and iPad 10.2 are discounted to their lowest prices ever at Amazon. These would make excellent gifts for Father’s Day. Hurry though because we are seeing limited availability on both devices.

The standard iPad 10.2’s bezels are still obscenely large (slimming them down would have made it look a bit more contemporary), but this tablet now boasts a bigger 10.2-inch screen compared to the previous model’s 9.7-inch display. In comparison, Samsung’s Galaxy Tab S6’s trimmed bezels look fetchingly modern, and so do those of the iPad Pro. None of this means that the iPad feels cheap, though. It has a nice substantial weight to it, plus it sports a 100% recycled aluminum enclosure, which is good for the environment. Instead of Face ID, which remains exclusive to the iPad Pro and the latest iPhones, you get Touch ID, although that’s not exactly a deal-breaker for most users. What sets this apart from the older iPad 9.7 is support for the Smart Connector so you can use it with Apple’s Smart Keyboard (sold separately).

Strangely, the iPad 10.2 didn’t get a processor upgrade, unlike the rest of the iPad lineup, which now boasts the A12 Bionic chipset. However, this tablet’s A10 Fusion processor still packs plenty of power. Multitasking with several apps open won’t be an issue, and navigating the new iPadOS is buttery smooth. The previous iPads ran with just a slightly altered version of the iOS, but the iPadOS is an entirely different beast. You have the ability to use multiple apps in the Slide Over menu, a revamped home screen layout that includes the Today View widgets, desktop-grade Safari, and multi-window apps. You can now even use Split View on the same app, like having two Google Docs open side by side.

Despite its shortcomings, the iPad 10.2 is the best tablet that you can buy on a limited budget. It is powerful, has a fantastic operating system, and serves up solid battery life. Get the 32GB Wi-Fi version for the very affordable price of $250 instead of $329 – a huge $79 off. What’s more, you can score an additional $50 off instantly upon approval for the Amazon Rewards Visa Card, reducing its price even further to just $200.

Visually, there’s nothing that sets the Apple Watch Series 5 apart from its predecessor the Series 4. It still sports the same square design and digital crown control system. Its case is made of 100% recycled aluminum (perfect for the environmentally conscious), although it also comes in titanium, stainless steel, and ceramic if you have the money to splurge, with a case size of either 44mm or 40mm. Curvy and ergonomic, it’s small and light enough to let you feel like you’re not wearing it, and it won’t get caught on your shirt cuff.

The biggest difference between the Apple Watch Series 5 and the previous Apple Watch iterations is its always-on display. It will always show the time and you no longer need to raise your wrist in order to wake the screen up. This might sound a tad silly and inconsequential, but having to move your hands unsubtly isn’t appropriate at all times, so we appreciate the slight upgrade. Workout stats are also immediately shown as soon as you start exercising. For example, do some pushups and the Watch will automatically display the corresponding metrics. There are plenty of watch faces to choose from, with designs that range from the elegant to the quirky. And if you’re thinking that the always-on display will take a serious toll on the battery life, don’t fret. It’s possible to get a full day and a half out of a single charge. Recharging takes about an hour.

The Apple Watch Series 5 also has an internal compass, an even more powerful S5 processor, and a much larger storage capacity. The interface is fun and simple to use. Using the digital crown to zoom in and out of the app screen is great, and the haptic feedback provides an impressively tactile experience. All your basic fitness-tracking needs are covered, plus a few more. It takes care of steps, calories, hourly movement, relaxation, VO2 Max data, hours spent standing, and workout tracking for a range of sports including swimming and biking, and it even handles more unusual activities like yoga and elliptical training.

Probably the most important health feature of the Apple Watch Series 5 is its electrocardiogram (ECG) monitor, which was introduced first on the Series 4. It’s not exactly a heart rate monitor — which is useful for fitness tracking as well as for medical purposes — but instead is designed for use when you feel an irregularity in your heart rate. Having it there will provide peace of mind to anyone with cardiac concerns, as it will send a notification if a problem is detected.

The Apple Watch Series 5 is nearly perfect and is the best smartwatch that you can buy right now. Get it for $300 instead of $384 at Amazon today. Just note the discount is applied at checkout.

Which iCloud subscription is right for you?

Which iCloud subscription is right for you?