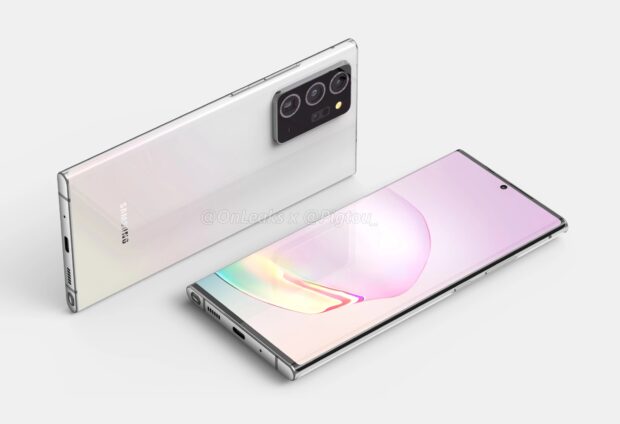 The generally reliable @onleaks has published renders of Samsung’s upcoming Galaxy Note 20+. We clearly see a Note-like device with an eye-catching camera bumb on the back. That is where the change seems to be concentrated in the coming period.

Although the renders of the Note 20+ come from @onleaks, they are published at Pigtou. We came across that name recently; they posted images of the Note 20 a week ago. Differences with both devices mainly focus on the camera bumb.

Samsung accentuates the triple camera on the back of the Note 20 Plus by giving the cameras a metal ring. Apple does something similar on the iPhone 11 Pro and Max. By the way, the total number of cameras on the back will exceed 3. We also see a fourth sensor, possibly a Time-of-Flight sensor for better 3D recognition. Above this is a LED flash. The Note 20+ is expected to have a periscope lens for improved zoom.

In addition to another camera module, this Galaxy Note 20+ appears to have a rounded screen edges while the regular Note 20 seems flat. But there are also similarities. For example, this time the S Pen is located at the bottom left on both devices. In previous editions it was found on the right. That will take some getting used to for old school Note users. The launch of both phones is not expected before autumn.

The Dell XPS 13 laptop got a huge discount, just in time for back-to-school