Home How to Master the jungle with our Predator: Hunting Grounds tips and tricks
How to

Master the jungle with our Predator: Hunting Grounds tips and tricks 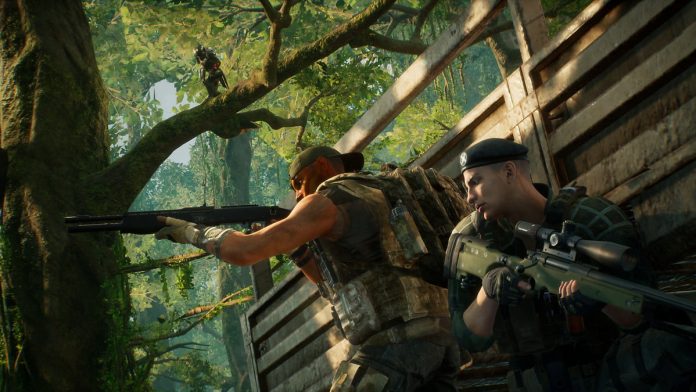 As soon as you start a match, your first goal should be to find a muddy road and “mud up.” If you’ve seen Predator, you already know why. The Predator’s infrared scanner can pick up the heat signatures of humans, making it easy to spot prey. If you cover yourself in mud, however, you won’t show up on the scan. You may have to look around for a proper spot, though. This mechanic is a little finicky, and as we’ll get to in a minute, standing in a single spot isn’t a good idea.

Whenever you first encounter the Predator while playing as a fireteam member, it’s tempting to run away so you can get a clear shot free of danger. Despite that, it’s best to stick together. The Predator is fast and tough to spot, and the last thing you want is it picking off each of your team members individually. If you see the Predator swing down for a kill, your entire team should turn their barrels and start firing immediately.

As a fireteam member, your sole goal is to survive. You’ll need to complete some objectives along the way and kill some enemies in the process, but at the end of it all, the only thing that counts is your survival. Remember, you’re not hunting the Predator. The Predator is hunting you.

If you’re following our tips and sticking together, you’ll force the Predator to jump down and try to kill your team at some point. You still want to shoot the Predator, and if you can, kill it. However, you shouldn’t go chasing the Predator if it retreats. Break from the area your team was attacked in and try to find a safe place to continue on. If you can cover yourself in some mud during the process, all the better.

The Predator isn’t the only one that can spot an enemy from afar. If you listen closely to the treetops above you, you’ll be able to hear the Predator moving about. Although you may not be able to actually spot the Predator, you can inform your teammates of its presence. Unsurprisingly, you can hear the trees moving more clearly on headphones, so we recommend using them. If you don’t have a pair, make sure to read our guide on the best gaming headsets.

If you’re lucky enough to down the Predator, you’ll have two options: Shoot off the face mask or run away. Shooting off the mask will earn you more experience, but in the process, spawn mobs of A.I. enemies. If you don’t shoot off the mask in time, the Predator will go into a self-destruct sequence. The game does a good job at letting you know that you’ll die if you’re inside the blast radius. It doesn’t, however, specify how large the blast radius is.

It’s huge — like, way more huge than you probably think. If the self-destruct sequence starts, move as far away as you possibly can. If you think you’re out of the blast radius, keep running. The self-destruct can wipe your entire team if you’re not careful, and in the process, steal a victory that you rightfully earned.

As you level up in Predator: Hunting Grounds, you’ll unlock weapons, perks, additional loadout slots, and more. You have a decent number of perks available from level one, though. The default loadout doesn’t have any perks enabled, and there’s nothing prompting you to enable them. Perks can net you more experience for each kill, make it easier when reviving teammates, and even give you extra uses of your tactical gear.

During the course of nearly all objectives, you or a member on your team will need to stop and hold a button. It could be to restart a computer, disable some sort of malicious machinery, or something else entirely. No matter the goal, be very cautious when standing in a single spot. You’re opening yourself up to a stealth kill from the Predator. If you must stand still — to activate an objective, for example — make sure your team is around, watching your back.

Predator plays a lot differently than you might expect, so if you get into a match unprepared, you aren’t going to fare well. Furthermore, Predator has a long list of unique abilities that are paramount to killing your target. Sure, the tutorial is long, easy enough that it might put you to sleep, and not very interesting. Trust us, though, it’s important to play through.

Although it’s tempting to fire up your radar, engage camouflage, and go crazy on the fireteam, you shouldn’t jump into battle right away. Unlike the fireteam, the Predator only has one objective, so you can take your time. Furthermore, you gain more experience if you kill the fireteam later in the match (more on that in a moment).

For the majority of each match, you should spend your time toying with the fireteam. Use the mimicry wheel to mimic the sound of team members and create distractions for the fireteam. This is especially important right before the fireteam enters a battle. Throwing them off right before a firefight is a great way to catch a squad member vulnerable.

Cheesy as it is, the Predator can use Predakour (not our name, the game calls it that). This allows you to quickly move between tree branches to traverse the jungle undetected. It’s not a mindless affair, though. If the fireteam picks up on your location and starts firing into the trees, you can still die. Mastering Predakour is essential when playing as the Predator, allowing you to nimbly escape combat when needed.

Whenever you kill a fireteam member, you’ll need to claim a trophy from them to earn more experience. There are two types of trophy claims: A quick claim and a full claim. Quick claims will earn you less experience, but they allow you to move quickly out of danger. Full claims, which show the Predator ripping out the skull and spine as a singular unit, net you more experience but leave you vulnerable to a counterattack. Assess each situation before claiming your trophy.

Use your perks … again

The Predator has loadouts, too, and like the fireteam loadouts, the game doesn’t enable any perks by default. At level one, you already have access to 10 perks. Of course, enabling them will give you a leg up in battle. Energy Cell, for example, allows you to store more energy reserves, while Impenetrable reduces the damage you take from certain weapons.

Take it one at a time

A well-coordinated fireteam can take down the Predator with little hassle. Even with your massive health pool as the Predator, it’s a battle of four on one, and that battle is always going to favor the larger team. You should focus on taking out squad members one by one. If you can take out a fireteam member or two during the course of the match, that’ll make taking out the remaining team members far easier.

You’ll gain more experience for staying patient, too. Your goal should be to pick off one or two squad members during the course of the match and take out the remaining ones near the helipad. The fireteam will be overwhelmed with A.I. enemies at this point, making it the perfect opportunity to strike.

Use the A.I. to your advantage

The fireteam will need to engage A.I. enemies during the course of each match, and you should use these moments to your advantage. We don’t recommend jumping down when the firefight starts, though. Rather, wait until there are only a few enemies left and then strike. After a battle, the team will likely be wounded and low on ammo, which is perfect if you’re playing as the Predator.

How to win Fortnite without building

It's not an easy task, but with a bit of help, you'll be well on your way to pulling off a Victory Royale.
Read more
How to

How to unlock golden tools in Animal Crossing: New Horizons

Unlocking each of them isn't a difficult task, but it will take a lot of persistence and hours of gameplay.
Read more
How to

When your PlayStation or peripherals do things you've never seen before, it's understandable you would get worried. The DualShock controller
Read more

How to win Fortnite without building

It's not an easy task, but with a bit of help, you'll be well on your way to pulling off a Victory Royale.
Read more

How to unlock golden tools in Animal Crossing: New Horizons

Unlocking each of them isn't a difficult task, but it will take a lot of persistence and hours of gameplay.
Read more

Master the jungle with our Predator: Hunting Grounds tips and tricks

Predator: Hunting Grounds, a 4v1 multiplayer shooter, is here. Here are our best tips for getting started.
Read more

Grab great fiction entirely for free for the next two months with this amazing Amazon deal.
Read more