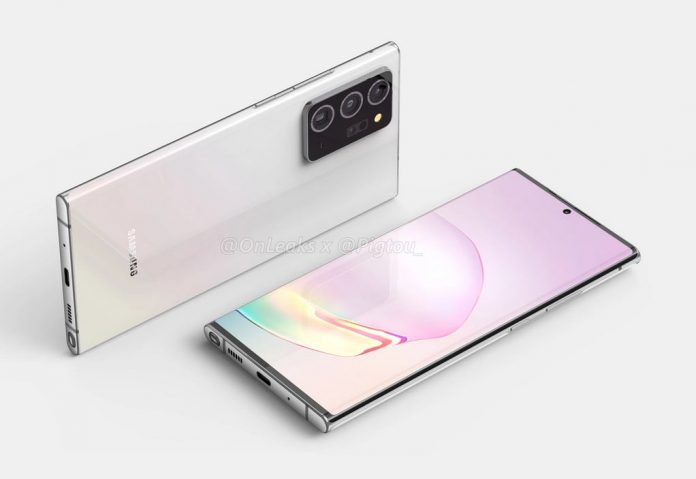 Samsung’s next flagship phone, the Galaxy Note 20+ has been previewed in a fresh set of leaked renders. Shared by OnLeaks in collaboration with Pigtou, the images reveal a familiar, boxy design that’s largely identical to the phone’s predecessor. Its most striking trait is the huge, protruding camera bump on the rear — similar to the existing Galaxy 20 lineup.

Unlike the highest-end Galaxy 20 Ultra, the Note 20+ is said to skip the headlining 100x zoom feature. It will come equipped with three camera lenses and leave out the additional fourth ToF sensor that offers depth assistance for portrait shots.

The hulking camera housing will pop out quite a bit with a thickness of 10.7 mm at its thickest point. However, it’s unclear at the moment whether Samsung has figured out the design issue that is causing many Galaxy 20 Ultra phones’ camera coverings to crack and shatter abruptly.

On the front, the Galaxy Note 20 Plus will have few alterations. It will be dominated by an OLED 6.9-inch screen (a hair taller than the Galaxy Note 10’s 6.8-inch panel) that goes nearly edge-to-edge and has a minuscule cutout at the top center for the selfie camera. The set of ports will remain the same as well. It will probably have a USB Type-C port, a slot for the S-Pen stylus, and no headphone jack.

Previous rumors suggest the next Galaxy Note will have a 108-megapixel primary camera, the same one found on the Galaxy S20 Ultra. To mend the autofocusing flaws that have plagued the Galaxy S20, Samsung has reportedly added a new, dedicated sensor.