HomeHow toHow to get a 5-star island in Animal Crossing: New Horizons
How to

How to get a 5-star island in Animal Crossing: New Horizons 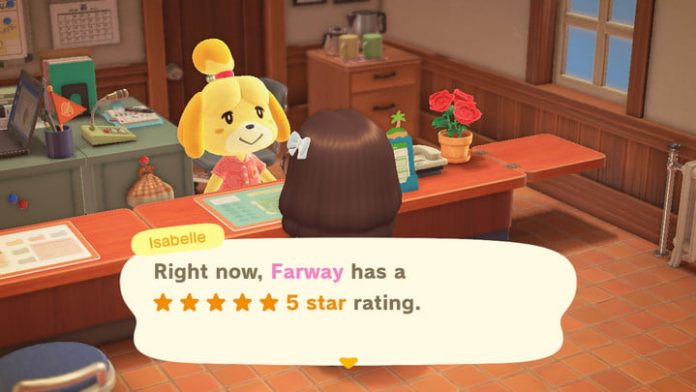 In Animal Crossing: New Horizons, there’s no shortage of things to do. The mega-popular, quirky Nintendo sim has skyrocketed to the top of the sales charts, bringing together a healthy mix of newcomers and longtime fans of the series.

In it, your goal is to populate your island and customize it with homes, shops, decorations, and inhabitants. As your island develops, you’ll likely want to start working on its rating, which is determined by meeting a long list of requirements. Your island’s rating can be anywhere from one to five stars.

Unfortunately, the game doesn’t specifically tell you what you need to do to get to a five-star rating. But we’ve got a breakdown of all the requirements you need to meet to reach the coveted five-star rating, along with the rewards you earn for doing so.

It’s true, New Horizons doesn’t exactly lay out the requirements to earn a five-star island. But if you go to Resident Services and speak to Isabelle, she’ll perform an island evaluation, which tells you your current rating. She also gives general advice for what you should do to increase the rating, along with testimonials from those who have visited the island.

These evaluations are certainly better than nothing, but they don’t have exact numbers or specifics, so it can be tough to gauge what to do next. Isabelle will also tell you if there’s anything causing your town rating to go down, like having too many trees or pieces of litter scattered.

The Animal Crossing community has collectively discovered the general requirements for getting your island to five stars. It’s not as exact as you might’ve hoped, but treating each requirement as a mini-goal to reach is a surefire way to increase your island’s rating.

You’ll notice some numbers, like the amount of fencing required, are estimates, depending on other factors. In this case, if you’ve got 50 pieces of fencing on your island and Isabelle says to add more, then keep going until she doesn’t comment on the fencing anymore.

There have been reports that decorations/furniture items have their own internal values, based on physical size. In other words, you can reach your goal faster if you lay down bigger items, and you won’t need to place as many. A monster statue is apparently valued higher than a chair — though how much more is unclear.

Here is a rough list of the requirements you’ll need to achieve five stars:

Make sure you don’t have an excess of trees (220 of them), and be sure there is no trash/litter on the island, or Isabelle will let you know. It’s also important that your trees and flowers are fully grown — buds don’t count. Having loose items scattered around will bring down your rating, so try to keep things tidy for the best results. If you’ve played lots like we have, you’ll likely be close to reaching these goals without really trying.

Rewards for getting a five-star rating

When you finally reach a five-star rating, you’ll probably be wondering what the reward is for all your hard work. You get two rewards for getting to that point, and you’ll have to be the judge of if it’s worth it or not. It seems many players were hoping for more.

You’ll gain access to the Lily of the Valley flowers, which will begin to grow around your island’s cliffs as early as the next day after you reach five stars. This is the only way to acquire them, and they work a little differently than the rest of the flowers in the game. They don’t reproduce like you’d expect. Instead, you must wait for them to randomly bloom while you keep up your five-star rating. Some reports suggest each flower can take up to a week to bloom, so you’ll need to be patient.

The other item you’ll be rewarded with after reaching five stars is a DIY recipe for the Golden Watering Can. The Golden Watering Can is the only item that grants you access to golden roses and it allows you to water up to 200 times before breaking, making it the best of its kind. Unfortunately, it still breaks, so you’ll have to continue to craft as needed.

Facebook
Twitter
Pinterest
WhatsApp
Previous articleThe Windows 10 May 2020 Update is now out, and here’s how to get it
Next articleApple Stops Signing iOS 13.4.1 Following Release of iOS 13.5
- Advertisment -

How kids and seniors prompted Qualcomm to heavily invest in wearables