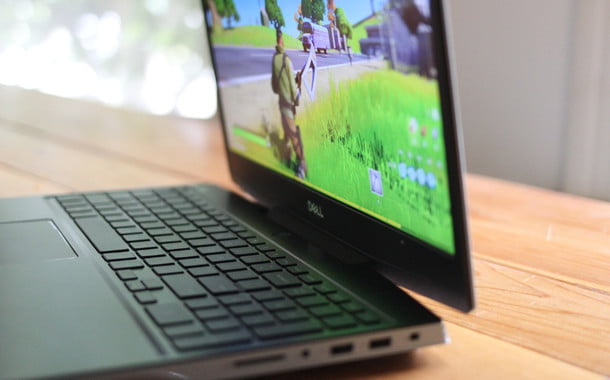 Nvidia doesn’t make PC processors. Intel doesn’t make PC graphics cards — at least, not yet. AMD is the one company that does both, and it hopes a more harmonious relationship between CPU and GPU could lead to extra performance.

The Dell G5 SE provides our first glimpse of that potential. It sports both a Ryzen 7 4800H and the Radeon RX 5600M graphics card, the latest and greatest AMD has to offer. Does it hold up?

On the outside, there’s not much to say about the Dell G5. It looks like it did before — sturdy and tank-like in appearance. It’s the opposite of sleek in just about every way.

This is a gaming laptop, so I started with 3DMark. The results in Time Spy were very encouraging for AMD. It sped past a midrange version of the Dell G7 I tested in late 2019, which was powered by an Nvidia RTX 2060 and an Intel 9th-gen Core i7-9750H. A 5% win isn’t a lot in benchmarks, but a win is a win.

Here’s where things get crazy. The G5 SE managed to best thin gaming laptops like the 2019 Razer Blade, which we tested with Nvidia’s RTX 2070 Max-Q. That’s impressive. The G5 SE is a chunky laptop by comparison, but it’s also far less expensive.

Processor performance is strong in its own right, but with eight cores and 16 threads, who’s surprised? AMD’s mobile Ryzen blows Intel’s six-core gaming chips out of the water in Cinebench R20 and Geekbench 5. Again, it beats the Razer Blade by 49% in Cinebench multi-core, and by the same amount in video encoding in Handbrake. I’m not surprised, especially after reviewing other Ryzen 4000 laptops like the ROG Zephyrus G14 or Acer Swift 3.

However, the real story isn’t about these components on their own. The true magic happens when they’re working in tandem.

Gaming is a good place to start. Games tax the GPU more heavily than the CPU, but it’s a combined effort that requires a balance between components.

Civilization VI is a more CPU-intensive game, and that’s where a Ryzen 4000 laptop can shine. It was only a few FPS (frames per second) behind the Razer Blade with an Nvidia RTX 2070, hitting 79 FPS at Ultra settings. Compared to the Nvidia RTX 2060 in the Dell G7 I tested, you’ll still see 19% better frame rates.

That’s a trend that continued in Fortnite. The AMD-powered G5 delivers 85 FPS at Epic settings, just a bit behind the RTX 2060 in the G7, and the Zephyrus G14. You’ll likely want to drop the settings to High to better utilize the laptop’s 144Hz refresh rate. There, the G5 SE hit an average of 105 FPS.

The final challenge was Assassin’s Creed Odyssey, a game that tends to grind even the most powerful gaming laptops to a halt. Gameplay was fairly smooth at an average of 53 FPS. That’s with quality set to High — the game’s middle setting. At Ultra High, you drop to 44 FPS, which is still playable but a bit choppy.

All the games were played at 1080p, of course, as that’s the native resolution for the Dell G5 SE. As you can see, the RX 5600M isn’t the most powerful graphics card in the world, sitting comfortably between the Nvidia GTX 1660 Ti and the Nvidia RTX 2060. Fortunately, you can pick up a base configuration of the G5 SE for as low as $880, which still comes with that same GPU. That’s a great value compared to what you get from Nvidia at that price.

Along with the new GPU and CPU, the Dell G5 SE also debuts AMD technology that ties the two together. It’s called SmartShift, a way of sharing power between the two components organically. Every laptop has a cap at how much power it can play with. SmartShift uses AMD’s InfinityFabric on both ends to push more power to either the CPU or GPU as thermal headroom allows — even past the standard wattage. AMD says SmartShift can result in up to 10% improved frame rates in games.

The trouble is SmartShift can’t be turned off, so there’s no way for me to prove it’s working. My final attempt at testing SmartShift was a video rendering in Adobe Premiere Pro. I loaded up a 2-minute 4K video clip and exported it to the ProRes 422 codec, watching the power share between CPU and GPU carefully. Video rendering in Premiere is a task best suited for a high core count processor, but it can also tap the graphics card. It’s the perfect way to see just how smart SmartShift really is.

The Dell G5 SE didn’t power share quite as much as I’d expected. The GPU was only tapped occasionally, keeping the processor in the spotlight. The Dell G5 SE’s render time was good, finishing the export in just under 8 minutes. That’s quite fast, beating Intel-powered laptops like the Razer Blade. More expensive options like the Dell XPS 15 or Microsoft Surface Book 3 beat it by a few minutes.

SmartShift is supposed to work by using an automated algorithm that adjudicates the best power allocation on a moment-by-moment basis, but Dell says AMD also needs to “whitelist” applications to better optimize performance in them.

There’s more to talk about regarding the G5 SE, including battery life and display quality. I’ll continue my in-depth testing and update this review soon.

While the impact of SmartShift remains opaque, the Dell G5 SE is still an example of how dominant AMD processors have become in consumer hardware. While the company’s GPUs still can’t compete with Nvidia in the high end, for its price, the Dell G5 SE is a competitive midrange gaming laptop.