Choose the PS4 controller that best fits your gaming needs 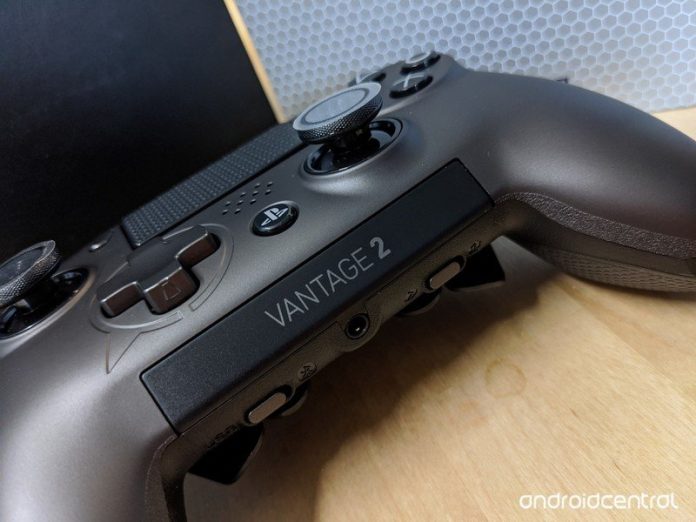 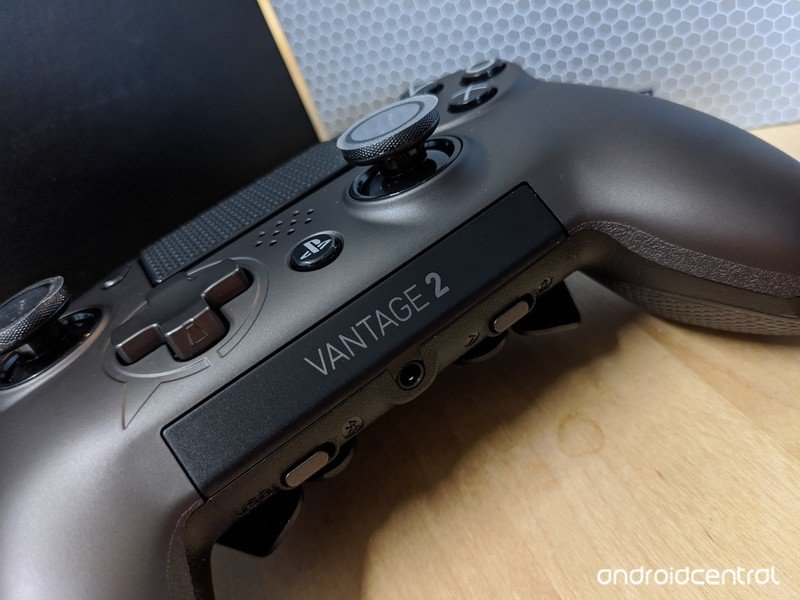 The stock controller for the PlayStation 4 is good, but there are a lot of options out there that offer a different experience. If you can afford it, your current best bet is the Scuf Vantage 2. It’s customizable, can be used wired or wireless, and it handles well. But we have options based on your budget and what you’re looking for, whether you’re a competitive gamer, have kids who want to play, or just want something with a more comfortable grip.

Scuf’s Vantage was already a favorite of professional gamers, and the Vantage 2 just upgrades the experience. Released in October, the new version gives players near-total control over their experience by changing both the physical layout of the controller along with programming the button configurations.

While the controller is pricey, you’re getting a bunch of extra components that make the cost more reasonable. The Vantage 2 comes with two extra thumbsticks you can swap out based on your preferred playstyle. The concave stick is designed to improve control while the domed one will up your accuracy. You can also swap between a D-pad for quickly darting in a straight line and a control disc that’s better for fighting games that favor diagonal movement. All of the materials are high quality and the textured, non-slip grips will keep your hands steady and comfortable during long play sessions

Along with being physically customizable, the Vantage 2 works with a free app that allows you to map each button and adjust the sensitivity of the thumbsticks and the intensity of the vibrations. You can save these configurations, alternating between them based on who’s using the controller or what kind of game you’re playing. Scuf provides recommendations for best layouts for games, including Fortnite and Borderlands 3. 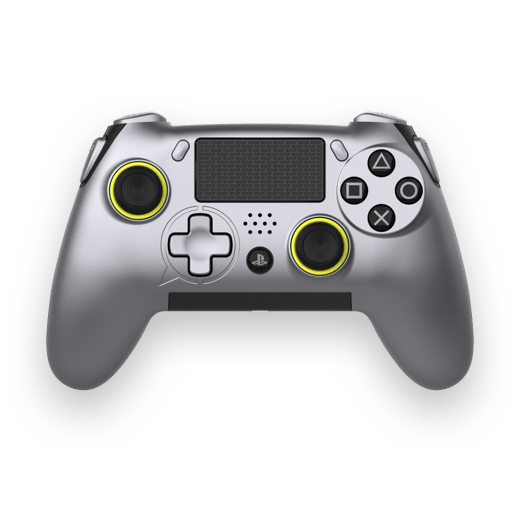 A great controller gets an update

Get the ultimate in customization with a modular controller you can program with your preferences for different types of games. 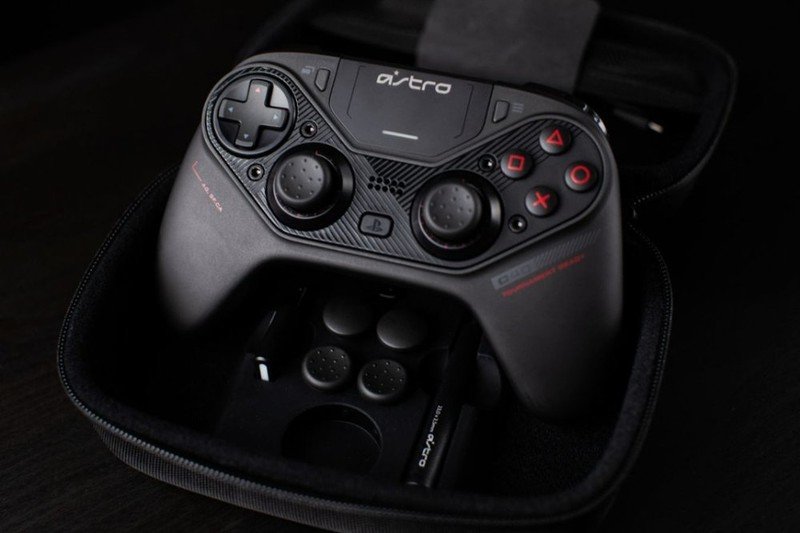 The TR in the controller’s name stands for tournament ready, and it delivers on its promise of being perfect for competitive gamers. The Astro C40 TR comes with the components needed to customize your controller, whether you prefer the traditional PS4 DualShock style or something more like an Xbox controller. You can also further refine your experience by choosing the height and concavity of your stick caps.

The software allows you to save button configurations and sensitivity as well as setting your audio preferences. You can then quickly swap between profiles saved on the controller. You can play wired to avoid any latency, but the controller also has a battery that lasts for 12 hours, and you can swap between the two modes with the touch of a button. Just remember to have the peripheral wireless transmitter attached as the controller doesn’t use Bluetooth.

ASTRO aims to make the investment more palatable by throwing in both a travel case and a six-month warranty. The biggest weakness is the battery, which is designed for 500 charge cycles but can’t be easily replaced. But by then, there might be an even more premium option. 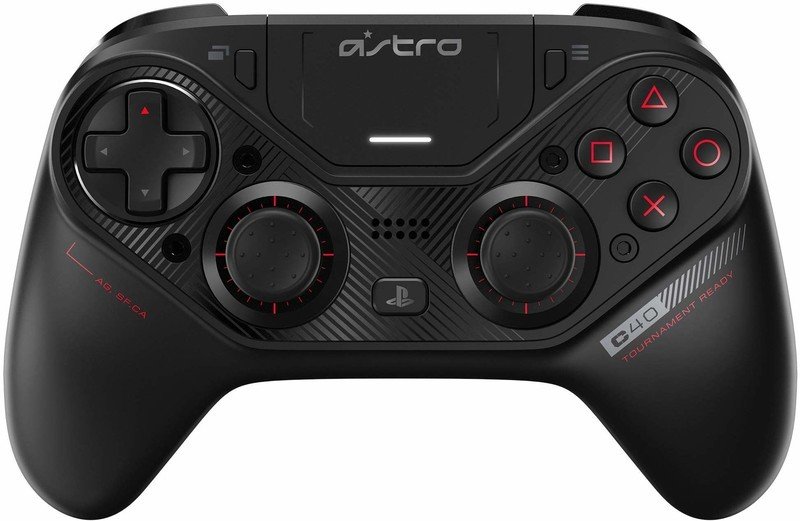 Designed for professional players, the ASTRO Gaming C40 TR can be easily swapped between Xbox and DualShock style and then further configured for your preferences. 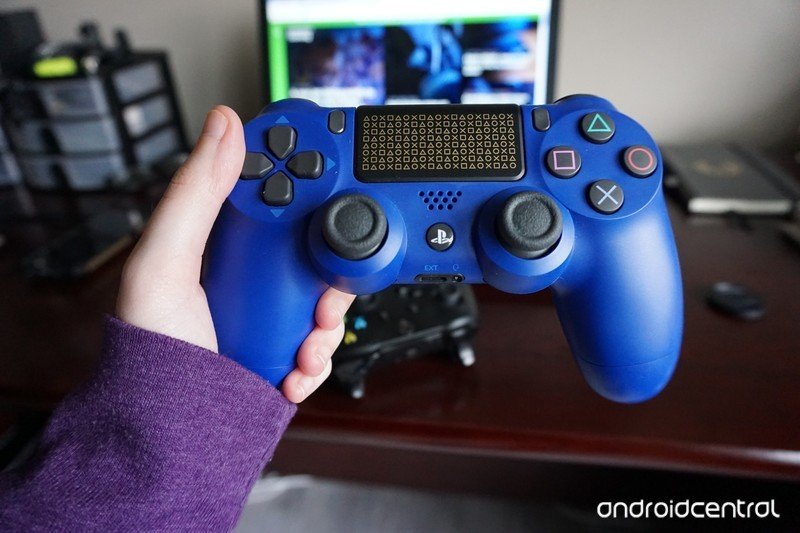 If you’re pretty happy with the way your PS4 handles but want a cooler looking controller, you can stick with the official Sony DualShock and just pick something you like from the wide selection of different colors and styles available. The manufacturer released a bunch more looks last fall, so you have more options than ever.

The PS4’s default controllers are generally a solid pick since it’ll survive being dropped a few times and has built-in speakers so you can plug in headphones if noise control is a concern. It’s also great for social gaming, letting you save and share videos and screenshots with just the press of the button.

The downside is it’s just not as comfortable in your hands as some models. It also has a mediocre battery life, which is made worse by the fact that the micro-USB used for charging is finicky, and you won’t get any charge if you don’t hook it up exactly right. 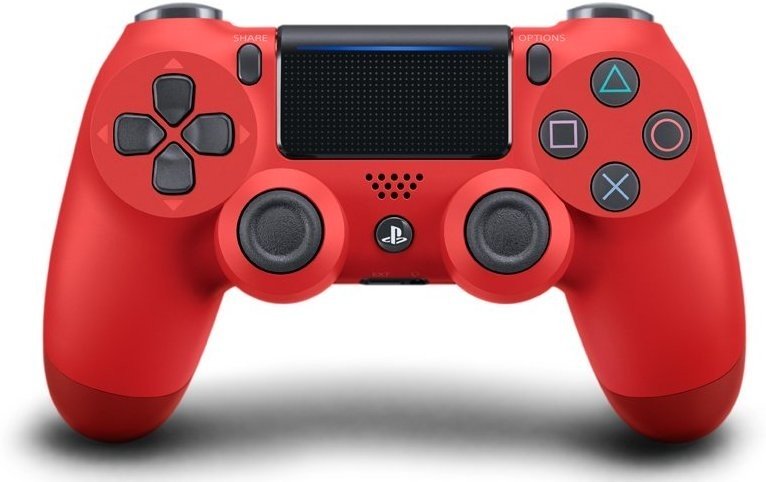 Brighten up your gaming

Stick with the controls you’re used to but add some personality to your setup by picking up a DualShock with your favorite color or a camouflage design.

Some folks love PS4 but wish the controller was more like the Xbox One’s with its offset analog sticks. Many find this layout more ergonomic, which makes the Nacon Revolution V2 a great option to try. The controller is also particularly well designed for fighting games and esports, featuring an eight-way directional pad and dual analog triggers and shoulder buttons.

You can use the preset controls to play with the Nacon right out of the box or use the advanced mode and companion app to set up to four profiles you can easily switch between. You can further customize your experience with a compartment that stores weights, letting you adjust the balance to your preferences.

The controller is wired, so you can’t sit too far away from the console. But you won’t have to worry about cords hanging everywhere when it’s not in use since the USB-C is easily detachable. 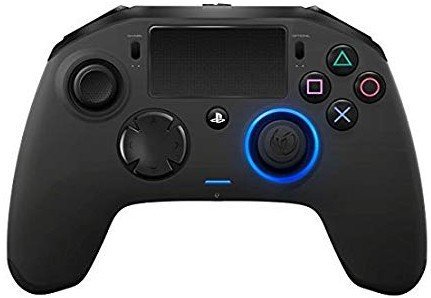 Xbox One controller for a PS4

This is the perfect pick for fighting game enthusiasts or anyone who just prefers the more solid feel of an Xbox One controller.

The Razer Raiju Ultimate is one of the best controllers that the company has to offer. It features app support for you to remap buttons and save different configurations in the cloud easily. The feel of its face buttons and triggers are just impeccable, leading to precision when gaming. A quick control panel lets you quickly access key functions, and you can also use a secure lock button to avoid unintentionally pressing things.

This is Razer’s first controller that you can use through both Bluetooth and a wired connection, so you can easily switch when you’re concerned about latency. You can play on your PS4 or PC using a variety of configurations, including thumbsticks of different heights or a D-Pad layout. It comes with a one-year warranty and a carrying case. One downside to this controller is it must be shipped from the U.K. as it’s not available in U.S. stores yet. 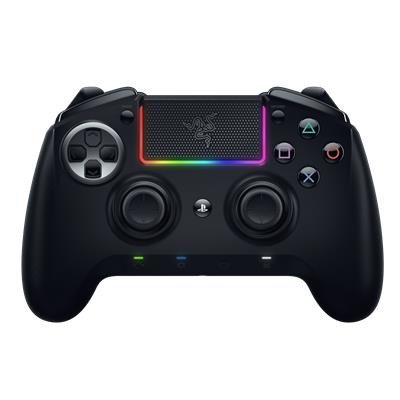 Bluetooth connectivity for your PS4 or PC

Customize your physical layout with different thumbsticks or a D-Pad and use an app to save different key configurations. 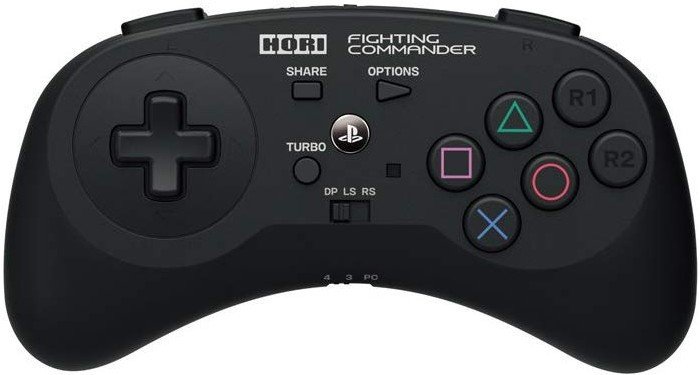 One of the only controllers specially designed for fighting games, the HORI Fighting Commander places the R1 and R2 buttons on the same side of the pad as the regular face buttons in a configuration that’s perfect for pulling off combos. Extra features like an R/L toggle and a programmable Turbo button ensure you can use it comfortably with any fighter.

The controls will feel familiar to players who’ve used a Sega Saturn 3D Control Pad, and a 10-foot long cable ensures you’ll avoid latency while still sitting a healthy distance from your console. The controller is also compatible with the PS3 and PC, and you can swap between settings with just the toggle of a switch.

The six-button layout, D-Pad, and turbo button will make it easy to improve your combat performance and also works great for other 2D classics.

If you’re trying to get your kids into gaming, they may struggle to properly use a controller where the buttons are spaced for adult hands. The HORI Mini Wired Gamepad will remove frustration with an easy grip and layout that’s 40% smaller than the standard DualShock. It’s also much cheaper, so you don’t have to worry if your children are rough with it.

The Mini attaches to your console with a 10-foot cable, which should give your kids plenty of space but also keep them from losing it in the couch. This controller doesn’t have a lot of the bells and whistles you’d find on a DualShock like the lightbar or stereo headset jack, but as an introduction to gaming, it will do nicely. 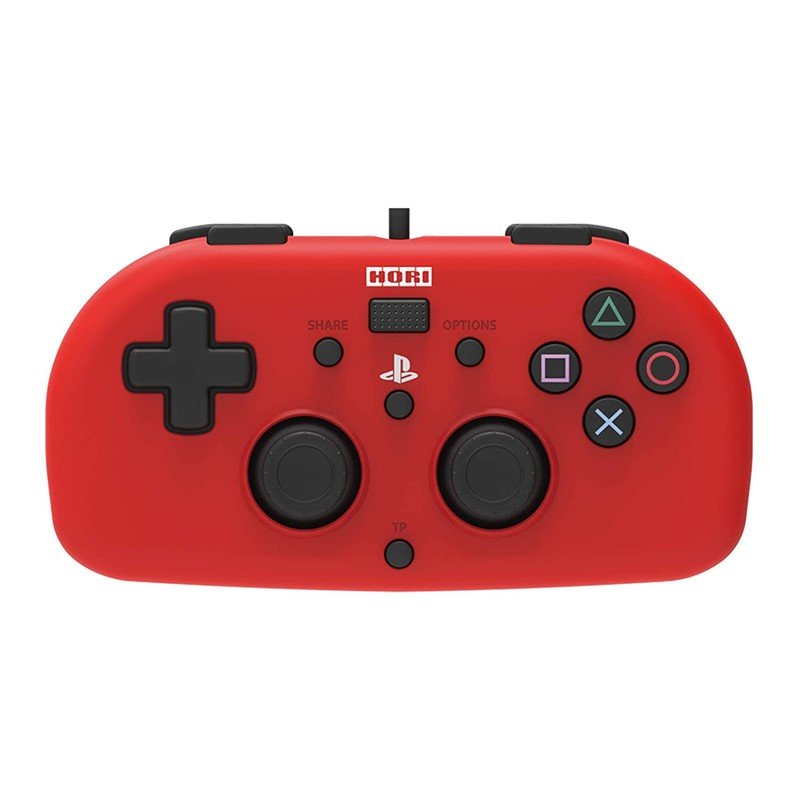 A controller for small hands

With a grip that’s 40% smaller than the DualShock, this plug-and-play wired controller is perfect for young gamers.

There’s no shortage of options for great PlayStation 4 controllers. Everything listed here will offer a delightful gaming experience, no matter your choice of genre. We especially want to highlight the Scuf Vantage 2 for its ability to allow players to fully customize their experience by choosing from 25 thumbstick configurations and swapping between a D-Pad or control disc.

Cheap is about the only thing you can’t call it. However, what you get for the price tag is a controller that you can modify to your heart’s content until you find the perfect fit. A companion app lets you remap the buttons, saving custom settings, or loading recommendations for hit games to improve your performance. If you can’t afford it or if you’re looking for an even more premium experience, check out our other picks to find something that will suit your gaming needs.

Jennifer Locke has been playing video games nearly her entire life. If a controller’s not in her hands, she’s busy writing about everything PlayStation. You can find her obsessing over Star Wars and other geeky things on Twitter @JenLocke95. 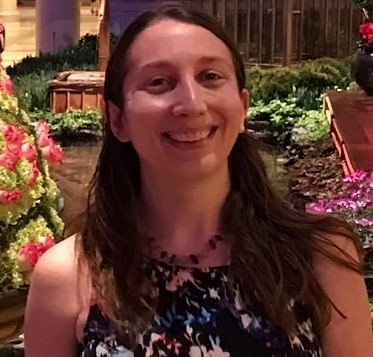 Samantha Nelson is a freelance writer for Android Central, iMore, Windows Central, Polygon, and Dicebreaker. She loves writing about video and tabletop games, genre TV, and other deeply nerdy stuff.