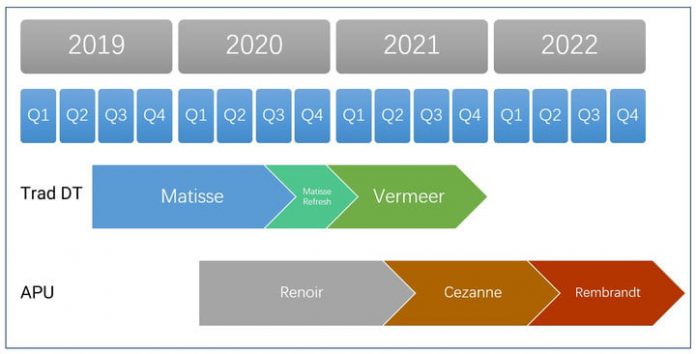 Having beat out rivals Nvidia and Intel in the race to 7nm, AMD is pushing for an even smaller node when it launches its yet-to-be announced Ryzen 6000 chipset. The company’s leaked product road map suggests that AMD’s next-generation Ryzen 5000 APU — code-named Cezanne — will debut in 2021. Meanwhile, the Ryzen 6000 APU — code-named Rembrandt — will arrive in 2022 with a 6nm node.

Rembrandt will be part of AMD’s 6th-generation Ryzen product lineup and will succeed Cezanne, which is expected to arrive in 2021. If the leak posted by Twitter user @Komachi is accurate, there will be a number of notable upgrades with Rembrandt, including AMD’s move to a smaller 6nm manufacturing process. This APU will likely be manufactured by TSMC with a new Zen 3 Plus processor architecture, delivering better energy efficiency and more performance uplift over the standard Zen 3 platform.

Other features include support for DDR5 memory, LPDDR5, USB 4.0, and PCIe 4.0. Unfortunately, AMD will be abandoning its AM4 socket when Ryzen 6000 debuts, moving to the newer AM5 platform, so a new motherboard will be needed for those wishing to upgrade from an existing Ryzen platform to Rembrandt.

According to the product road map, AMD will launch its Ryzen 4000-based APU, also known as Renoir, for desktops in June. After Renoir, AMD will be working on its Cezanne APU, which will feature Zen 3 processor architecture and a Vega graphics core. Cezanne will be divided into a higher-performance product family, which will go by the Cezanne-H branding and a low-powered chip denoted by Cezanne-U. Like previous members of the Ryzen family, the Cezanne lineup is expected to support the AM4 socket, making upgrades easy.

On the CPU side, we can expect to see major performance uplifts, though specifics were not reported on Wccftech. The graphics of this APU will be driven by an enhanced Vega GPU. Earlier leaks suggested that Cezanne will be paired with RDNA 2 graphics, but Wccftech now speculates that the APU will instead continue to rely on the older Vega cores, with RDNA 2 support relegated to systems with discrete graphics in 2021.

When will these come out? The APU will likely be announced at CES 2021 and a launch could happen by Computex 2021. In terms of the overall APU road map, we can expect to see Renoir this year, Cezanne next year, and Rembrandt in 2022.

For low-powered systems, AMD is also said to be prepping its Van Gogh chipset to compete against Intel’s Y-series processors. Van Gogh is described as a custom system on a chip (SoC) comprised of Zen 2 processor cores and RDNA 2 graphics with a maximum TDP of 9 watts. This low-powered SoC is expected to launch sometime in 2021.

Facebook
Twitter
Pinterest
WhatsApp
Previous articleStart the year off right with these incredible fitness trackers!
Next articleGet in shape this summer with a free Noom subscription

You've had years to get this done. No more excuses!As someone who loves YouTube, watches a non-healthy amount of YouTube,
Read more

With all the packages we receive these days, it makes total sense to equip your front door with a smart
Read more

No person or company is perfect. Here are some things Google could do better in the coming year.Google isn't the
Read more

How often do you find a service that can truly keep your children entertained for hours, days, weeks... even months
Read more