Home How to All Call of Duty: Warzone Bunker locations: Where they are and what’s...
How to

All Call of Duty: Warzone Bunker locations: Where they are and what’s inside 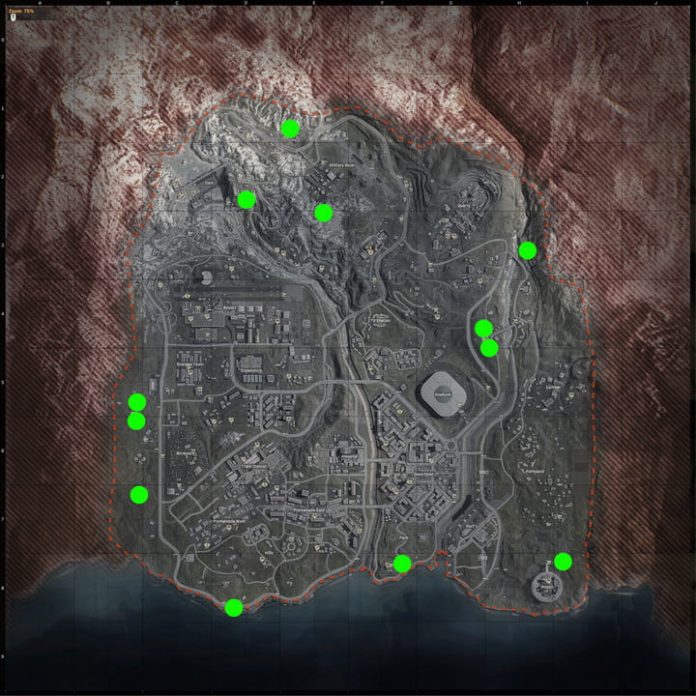 With the release of Call of Duty: Warzone‘s latest update, players are now able to enter the mysterious bunkers that are scattered throughout Verdansk. These bunkers have been in the game since Warzone released, but players haven’t been able to access them until now. In total, there are 12 of them, and in this guide, we’ll detail how to locate each bunker and what they contain. If you approach a bunker door, you won’t be able to enter unless you have a Red Access Card, so you’ll need to obtain one first.

There are still secrets to uncover, like the purpose of the laptops and phones that can be found across Verdansk. Currently, the bunkers don’t seem to contain anything too out of the ordinary, but this might change as Infinity Ward continues to update the game. You’ll find a huge stash of loot in each bunker, from Legendary boxes to cash and killstreaks. You’ll have to go down some steps and through a couple of hallways after the doors open to find the stash, and the layouts are slightly different depending on the location.

You’ll find Red Access Cards randomly in Legendary chests. Keep in mind, it’s somewhat rare to find one of these cards, so keep exploring until you do. You can also pull them off the bodies of your enemies if they were carrying one.

You might want to play naturally and then decide which bunkers to visit based on your location. It’s unclear if there is something you need to do to trigger the Red Access Card to spawn. Once you have a card, you can approach the keypad just outside of a bunker door to open it. After you use the card, the doors will open and you’ll be able to enter to find the goodies inside.

Below is a list of all 12 bunker locations with a detailed description of how to find them.

There are two locations that feature a pair of bunkers that are very close together. These can be found in the Junkyard area and just northeast of the Stadium. If you’re planning on going to all of them, it might be best to grab a helicopter after you find a Red Access Card to fly to each location. Depending on the way the gas is moving, you may not be able to get to all of them. Note that some bunker doors are found outside, while others are placed in larger structures. We’ll highlight if a bunker is inside or outside with each description.

Bunker 00 is located in the south section of Promenade West. It’s just below a small cliff that leads to the out-of-bounds area. This bunker is super easy to miss, so just make sure you’re thorough when looking for it, and be careful of going out of bounds or falling off the cliff.

Northeast of the previous bunker, you’ll find Bunker 01. It’s located north of the go-kart track after you go down some steps. Look for a smaller structure that contains this bunker, slightly southwest of the Boneyard.

Bunkers 02 and 03 are located right next to one another. You’ll find 02 in another outside structure, much like the last bunker. It’s south of 03 and southwest of Storage Town. As for bunker 03, it can be found just slightly north of 02, in a large building. Once you enter the building, head to the right and drop down the ladder to find bunker 03.

You’ll find bunker 04 southeast of the Dam, near some smaller buildings. Unlike the last few bunkers, this door is right outside, so there’s no need to look for a larger building that contains it. Look for it in the cliffs.

The next bunker is located south of the Military Base, near a radio tower. Again, you’ll find it outside, much like bunker 04, along some cliffs. This bunker is found by a high traffic area. Be cautious if you plan to visit this one.

To locate bunker 06, head southeast of Quarry. You’ll notice a large train tunnel to its left — make sure you don’t confuse the two. Bunker 06 is just above the train tunnel, to its left. You’ll find it outside.

This is the other set of two. You’ll find them northeast of the Stadium, but be careful as this is a high traffic area. This set is similar to the format of bunkers 02 and 03. Bunker 07 is found in the smaller building, in which you’ll need to go down some steps to locate. Bunker 08 is in the larger structure, where you’ll have to enter and go down a ladder. The bunker doors are right across from one another. It’s best to avoid these two bunkers if possible since they’re found in such a busy area.

Just northeast of the prison, you’ll find bunker 09 on the side of a cliff. This bunker door is outside, to the east of the large bridge that exits the prison.

Bunker 10 is located west of the last, near the large spiral staircase that overlooks the park. You’ll find it just off the main road that leads to Downtown. The bunker entrance is part of a larger structure, so enter it and go down some stairs to find the door.

The 11th and final bunker is in the far north section of the map, northwest of the Military Base. You’ll find it outside on the side of a cliff, to the north of the fire station.

What other secrets are there?

It’s still unknown what else lies beneath the bunkers and how each location ties to the phones and laptops found around the map. It’s possible they’re all linked together. One player recently discovered a nuke inside bunker 11, so it’s possible there’s a larger Easter egg in the works here. The bunkers contain yet another locked door inside them, and fans are speculating this is part of a larger Easter egg, much like those found in the Black Ops series. We’ll continue to update this post as more secrets are discovered.