HomeComparisonOnePlus 8 vs. Samsung Galaxy S20: Which is better for you?
Comparison 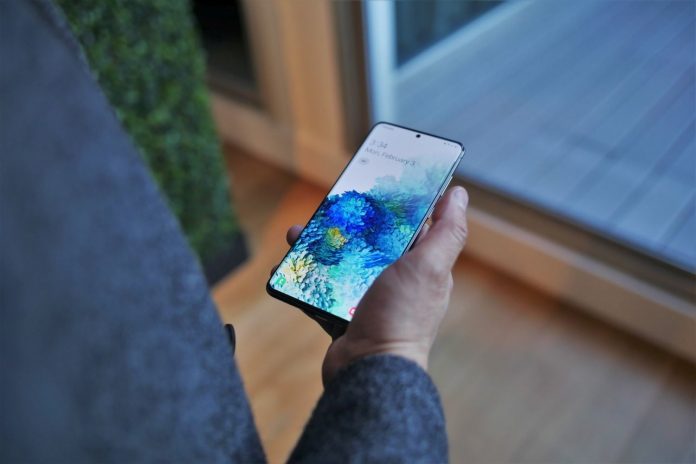 For quite a while now, Samsung has sat at the top of the smartphone food chain, presenting itself as one of the major players in the world of Android devices. OnePlus, a company that had initially positioned itself as an enthusiast budget brand, is now attempting to sit at the big kids’ table with the OnePlus 8, but is it enough? We take a look at the new OnePlus 8 and how it stacks up to Samsung’s Galaxy S20. If you’re stuck on the fence deciding, our guide will help you make a final decision, selecting the smartphone best for you.

Samsung’s Galaxy S20 continues forward with a familiar design; the only minute changes are to the rear camera assembly and position of the forward-facing camera. Constructed from metal and glass, the S20 comes in an assortment of three colors: Cosmic Gray, Cloud Blue, and Cloud Pink. Flip the device over, and you’ll find a large 6.2-inch Quad HD+ display with AMOLED technology and HDR10+ certification for vibrant colors. The S20 sports a 120Hz refresh rate, making everything from video games to scroll-through menus appear butter-smooth.

The OnePlus 8 has quite a muted design also constructed from metal and glass, sporting three color options: Glacial Green, Interstellar Glow (a purple-pink option), and Onyx Black. The back of the device proudly displays the OnePlus logo, and a stack of triple cameras sits atop the marking vertically. The 8 sports a slightly larger 6.55-inch display, also backed by AMOLED technology, providing an HDR experience. Somewhat slower than the Galaxy S20, the OnePlus 8 display sports a 90Hz refresh rate, but it still makes for a smooth graphical experience.

When it comes down to durability, both smartphones feature sturdy metal constructions but find themselves surrounded by glass. As with most modern smartphones, you’ll likely want to throw a case on both devices to keep them safe. If you’re looking to keep down on weight, the Galaxy S20 will be your best option with the device coming in at 163 grams, versus the OnePlus 8 at 180 grams.

When it comes to performance between the OnePlus 8 and Samsung Galaxy S20, there isn’t much of a fight — it’s an immediate tie. Both devices sport the top-of-the-line Qualcomm Snapdragon 865 processor and sport a minimum of 8GB of RAM. As we move up a tier, both Samsung and OnePlus provide the option to increase RAM up to 12GB for increased performance. With top-tier hardware, we don’t believe you’ll see much of a performance difference, as OnePlus has upped its game for its latest smartphone.

Battery life will require further testing, but for the time being, we know that the OnePlus includes a 4,300mAh battery, while the Samsung Galaxy S20 opts for a slightly smaller 4,000mAh option. When it comes down to wired charging, there’s a clear winner. Samsung’s S20 includes fast 25W charging, but it’s left in the dust by the OnePlus 8’s 30W Warp Charge. Unfortunately though, the OnePlus 8 doesn’t include wireless charging like the OnePlus 8 Pro, so it loses some points to the Galaxy S20. Based on that exclusion, this is a tie.

Many smartphones live or die depending on their included cameras, but both the OnePlus 8 and Samsung Galaxy S20 provide reliable options. Flip the S20 over and you’ll find a triple camera array — a 12-megapixel f/2.2 ultra-wide, a 12-megapixel f/1.8 wide-angle, and a 64-megapixel f/2 telephoto. Optical image stabilization is on board to help in low-light situations, and the phones include Samsung’s Super Resolution Zoom at up to 30x. On the front of the device, you’ll find a small centered hole-punch featuring a 10-megapixel f/2.2 camera for selfies and video calls.

The OnePlus 8 also brings forward a triple camera setup on its rear — a 48-megapixel f/1.75 wide-angle, a 12MP f/2.2 ultra-wide, and a 2-megapixel f/2.4 macro option. You won’t find any unique zoom technology here, but the OnePlus 8 stands out as a healthy option if macro photography is a particular hobby that you enjoy. Flipping around to the front camera, you’ll find a left-centered hole-punch with a 16-megapixel f/2.45 camera.

When it comes down to video recording, the Samsung Galaxy S20 can capture 8K video at 24fps or 4K UHD video at 60fps — both include HDR10+ recording capabilities and video stabilization. The OnePlus 8 doesn’t push into 8K territory, but can still capture a respectable 4K video at 60fps. Overall, both smartphones offer excellent camera performance with Samsung favoring more vivid color profiles; however, we would have liked to see more shadow detail from the OnePlus 8.

While the OnePlus 8 takes good photos, it’s edged out by the Galaxy S20’s improved camera.

Both the Samsung Galaxy S20 and OnePlus 8 are running Android 10, the latest variant of the mobile operating system. Onboard the Samsung device, you’ll find the typical software expected from the technology giant, including Samsung Pay, the Bixby voice assistant, and an anti-virus suite powered by McAfee. The OnePlus 8 makes things a bit more interesting, however, with its OxygenOS, a skin developed by OnePlus that aims to make Android a bit friendlier. OnePlus even opted to include Amazon’s Alexa voice assistant available straight out of the box. Overall, we like both interfaces, and the choice will be a personal preference ultimately.

Things aren’t as personal when we move to updates though, and while both phones will undoubtedly get Android 11, update speed is likely to be quite different. Samsung is far from the fastest to update its phones, while OnePlus is much faster. OnePlus takes this round on the strength of its update speed.

Both the Samsung Galaxy S20 and OnePlus standardize on several features, such as including a built-in under-screen fingerprint sensor and 5G connectivity support. However, it’s the unique features between these two devices that make them attractive. For Samsung, its ultimate showcase is the added camera array with a new ability, Single Take, that takes several photos over 10 seconds and then presents you with the best options. OnePlus stands out with its Warp Charge technology, but also makes an impression with its Smart Pet Capture mode, helping you snap the cutest picture of your little pals. Overall, both smartphones are packed full of features, but neither has any extreme standouts.

Samsung’s Galaxy S20 comes in with a price tag of $1,000, although we have regularly seen it on sale for as low as $800. OnePlus, on the other hand, offers the OnePlus 8 at a standard price of $800. Of course, these prices are for unlocked smartphones, and paying through your carrier could net you a discount. Currently, both smartphones are available internationally via a variety of primary and local cellular carriers.

Is a good camera good enough or do you need the best? That’s one of the key questions you should be asking when choosing between the Samsung Galaxy S20 and OnePlus 8. Both devices feature beautiful designs, but neither leave us awe-struck. While each device offers a few minor software features over the other, nothing stands out as revolutionary between these two devices. The OnePlus 8 pulls ahead in its price tag and excellent fast-charging abilities, while the S20 offers a better display, impressive cameras, and wireless charging. In the end, OnePlus 8 flashes around an attractive price, but Samsung brings a better assortment of hardware to the table, winning this battle.

Facebook
Twitter
Pinterest
WhatsApp
Previous articleHow to measure your PC’s power use, and why it matters
Next articleThis is what professional drivers are using to race remotely during lockdown
- Advertisment -

How to enable FreeSync on PC

Find the best wireless headphones you can get for $100