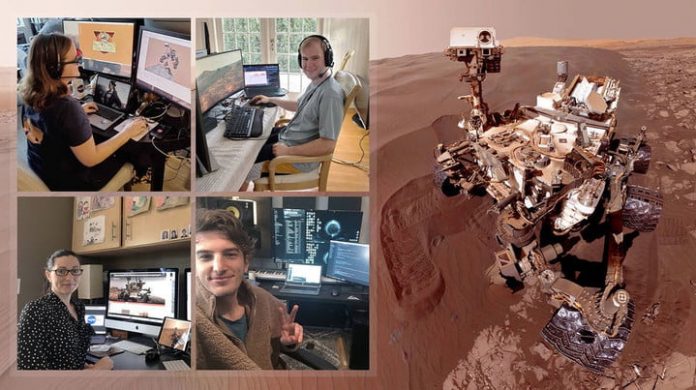 The coronavirus pandemic has led to millions of people around the world swapping their regular office for a home-based alternative.

NASA, for example, last month instructed all of its employees nationwide to work from home in an effort to protect them against the virus and also to help slow its spread.

So how is it working out for, say, the team tasked with operating the Mars Curiosity rover? You’d think it’d need access to all of its advanced equipment to operate a vehicle currently more than 120 million miles from Earth, but, with some careful preparation, the job is getting done.

In an interesting piece on its website, NASA has shed some light on how its Curiosity rover team has been working over the last few weeks, sharing details on how it carried out a particular task using the distant rover.

Usually based at NASA’s Jet Propulsion Laboratory in Southern California, the team is currently dispersed, with each member working from home. NASA said that a recent task involving the rover drilling a rock sample marked the first time ever for the vehicle’s operations to be planned and executed by a team working entirely off-site.

Most of the computer kit could be set up at home, but some parts — for example the high-tech googles that help the team to work out where to drive Curiosity — had to be left at base as they need extra computing power to operate. The workaround? 3D glasses. “Although not as immersive or comfortable as the goggles, they work just as well for planning drives and arm movements,” NASA said.

Programming each sequence of actions for Curiosity usually involves as many as 20 people at the Jet Propulsion Laboratory, developing and testing commands while chatting with dozens of others located elsewhere.

“We’re usually all in one room, sharing screens, images and data,” said Alicia Allbaugh, who leads the team. “People are talking in small groups and to each other from across the room.” But now, working remotely, they’re doing the same job by holding several video conferences at the same time while also using messaging apps to communicate. Science operations team chief Carrie Bridge says she can find herself monitoring as many as 15 chat channels at once.

The system works well, though a day’s planning tends to take one or two hours more than it normally would. NASA said that while the extra time for planning can reduce how many commands it sends to the rover each day, Curiosity is pretty much as scientifically productive as ever.

The team took a while to get used to working together remotely, but Bridge said she always knew everyone would pull together to make it happen.

“It’s classic, textbook NASA,” she said. “We’re presented with a problem and we figure out how to make things work. Mars isn’t standing still for us; we’re still exploring.”