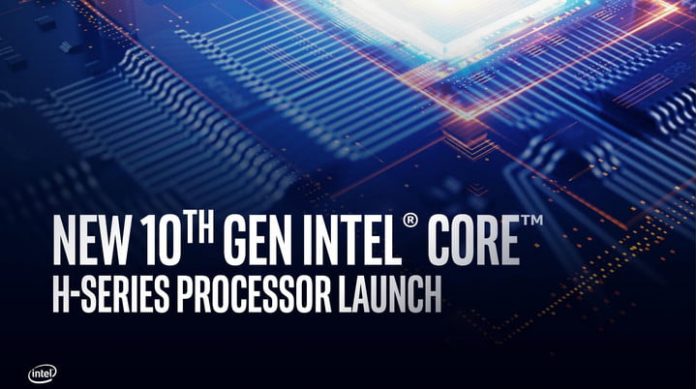 This comes hot on the heels of an aggressive attack from its rival, AMD. The company’s new Ryzen 4000 laptop processors bring eight-core, sixteen-thread power to laptops as small as the new Zephyrus G14. It’s impressive.

The headlining features are a new eight-core Core i7 and a monster Core i9 with turbo speeds of up to 5.3GHz. Is this enough to take back the momentum from AMD?

Intel’s H-series processors are some of the most important chips in their lineup. Whether it’s a gaming laptop like a Razer Blade or a content creation device like the Dell XPS 15, it likely has one of these chips at its heart.

Intel expects over 100 designs to use Comet Lake-H chips this year, which includes over 30 laptops that are under 0.78 inches thick.

Here’s how the lineup of H-series chips looks this year:

The first eight-core Core i9 was released in 2019, and an eight-core Core i9 is once again at the top of the stack. Its headline feature is the 5.3GHz turbo frequency. This is a big jump over last year’s Core i9, which topped out at 4.9GHz. In terms of clock speed, it’s even faster than the latest 9900K and 9900KS desktop parts.

Intel is using its TVB (Thermal Velocity Boost) 3.0 for short bursts of clocked-up frequencies. These speeds aren’t meant to be sustained, but are made for quick, bursty workloads like photo editing, or loading certain games. With TVB 2.0, the feature was reserved for the Core i9 parts, but this year, it has been extended to the Core i7 chips as well.

What about all-core turbo? Intel has downplayed its sustained all-core clock speeds in recent generations, and that hasn’t changed in Comet Lake-H. An Intel representative did mention the Core i9 chip can boost to 4.4GHz with all cores activated.

The previous mobile Core i9 was a popular choice in laptops like the 16-inch MacBook Pro and Dell XPS 15, machines meant for content creation that can use those extra cores. Historically, it has been avoided by gaming laptops. But this year, Intel has renamed its locked Core i9 as the Core i7-10875H. It has the same clock speed, core count, and cache size as the last year’s Core i9-9980H. Intel is aligning its chips with AMD’s eight-core lineup, which includes a Ryzen 9 4900H and Ryzen 7 4800H.

It should be noted that while Intel is stressing its high single-core boost speeds, the Ryzen chips offer higher base clocks. The Ryzen 9 4900H sits at 3.3GHz and the Ryzen 7 4900H at 2.9GHz.

Further down the stack, Intel’s lineup is familiar, with two six-core Core i7s and two four-core Core i5s. These processors get the same 8% uptick in boost clocks, and a minor bump in base clock. AMD’s respective Ryzen 5 chip has two more cores, four more threads, and a higher 3.0GHz base clock speed.

Intel’s briefing didn’t focus much on comparisons against AMD, or even Intel’s own 9th-gen chips. Rather, the company focused on the performance benefits for a buyer looking to upgrade their three-year-old laptop. Intel boasts up to 54% better game performance, two times faster 4K video renders, and 44% better overall performance.

Why show these changes? Well, Intel deduces the people most likely to buy a gaming laptop in 2020 are upgrading from at least a three-year-old PC. These numbers also include the vast increase in graphics capabilities, which Intel is not responsible for.

Intel says it expects Comet Lake-H to provide a double-digit percentage increase over last year’s chips. It wasn’t specific on what types of workloads or games would deliver that degree of improvement.

Clock speeds are often limited by each laptop’s thermal restrictions and chassis design, meaning many often don’t hit the speeds Intel quotes. Intel did mention that this year over 60% of Core i9 models would be able to hit at least the 5.0GHz threshold.

Comet Lake-H is the successor to the 9th-gen Coffee Lake-H chips that shipped in 2019 laptops.

Intel no longer likes to mention what process node its chips use, happily branding everything new as “10th-generation.” These Comet Lake-H chips are, however, are based on the 14nm process the company has used for many years now.

Comet Lake first debuted in 2019 with its U chips for small laptops. Confusingly, it was launched alongside Intel’s flashier 10nm Ice Lake processors under the same branding of “10th-generation.” Intel continues to push 10nm in lower-powered devices with its second iteration (Tiger Lake) set for later this year.

On desktop and H-series laptops, Comet Lake continues to use 14nm. Currently, Comet Lake desktop chips are rumored to extend up to ten cores and twenty threads.

The MacBook Pro has long enjoyed the use of four Thunderbolt 3 ports. That feature is now coming to Windows laptops too, exclusively with Intel’s 10th-gen Comet Lake-H chips.

Intel has done this by supporting two separate Thunderbolt controllers, with two ports each. In the past, Windows laptops were limited to just two.

This isn’t a change you’ll likely see in gaming laptops, but you can expect content creation devices to follow Apple’s lead. The days of HDMI and USB-A are numbered.

Laptops that include 10th-gen Comet Lake H processors will be available for pre-order starting now, with the first systems shipping on April 15.